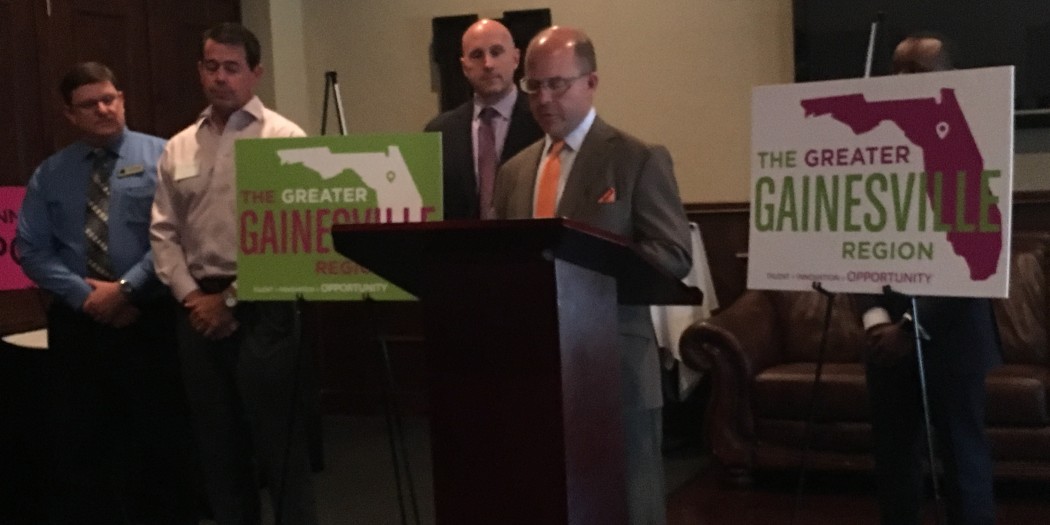 Rory Causseaux, chair of the Council for Economic Outreach, introduced the logo on Wednesday and talked about the importance business growth has on creating jobs. (Oriana Bravo/WUFT News)

A fuchsia-colored map of Florida with a white location pin marking Gainesville is now the logo for Gainesville’s economic growth initiative.

The Gainesville Council for Economic Outreach, an Enterprise Florida organization, also announced its new tagline Wednesday afternoon at Mark’s Prime Steakhouse in downtown Gainesville as a part of a campaign to put the greater Gainesville region on the map for business development.

The tagline: “Repeat after me: talent plus innovation equals opportunity,” said Susan Davenport, president of the Gainesville Area Chamber of Commerce, during the press conference.

The new marketing campaign comes as one of four strategies in the council’s five-year plan to attract global site selectors — influencers on where a business will best expand — to North Central Florida.

“Today’s announcement is extremely important,” said communications director for the chamber, Alyssa Brown. “It’s the beginning of a new journey; getting greater Gainesville’s entrée onto the global stage really represents an opportunity for the people who live and work here and for the job creators who run their businesses here.”

In the past four years, Davenport said the greater Gainesville region has seen some economic growth in the form of 1,700 new jobs and $400 million in capital investment.

“Site selectors select where to set up businesses,” Davenport said in her speech. “We are not on the radar of these decision makers. They don’t know who we are yet.”

This marketing launch is designed to do just that: put Gainesville on the radar. The logo’s design was chosen out of a batch by a team of site selectors and business leaders because they found it was compelling and distinguished Gainesville from other cities, according to Brown.

Kevin Monroe, Cox Communications Vice President of Market Operations for North and Central Florida, believes in the future of this area of Florida and the country.

“There’s a lot of expectations that I think the business community has for Gainesville, but I think one of the main things is it really kind of goes back to jobs and building an environment that allows all citizens the opportunity that they deserve to create a lifestyle they can be proud of and that allows us to thrive in our community,” Monroe said.

Transforming Greater Gainesville began in 2015, but this marketing effort is expected to continue for about three years — enough time to give the council the opportunity to build on what was successful during their campaign, Brown said.

Edgar Campa-Palafox, Alachua County’s economic development coordinator, said the timing for the launch is appropriate, considering the change happening in our community.

“You probably see it around town,” Campa-Palafox said.  “There’s a lot of stuff going on, a lot of economic activity growing in our community. If you see in the last five years, the innovation hub from UF wasn’t there and now it’s building and it’s expanding.”

Oriana is a WUFT reporter who can be contacted by email at oribravo1@ufl.edu or Twitter at @oridbravo
@Oridbravo
Previous Museum Exhibit Explores Alachua County’s Medical Past
Next Catholic School in Citrus County Saved by Community