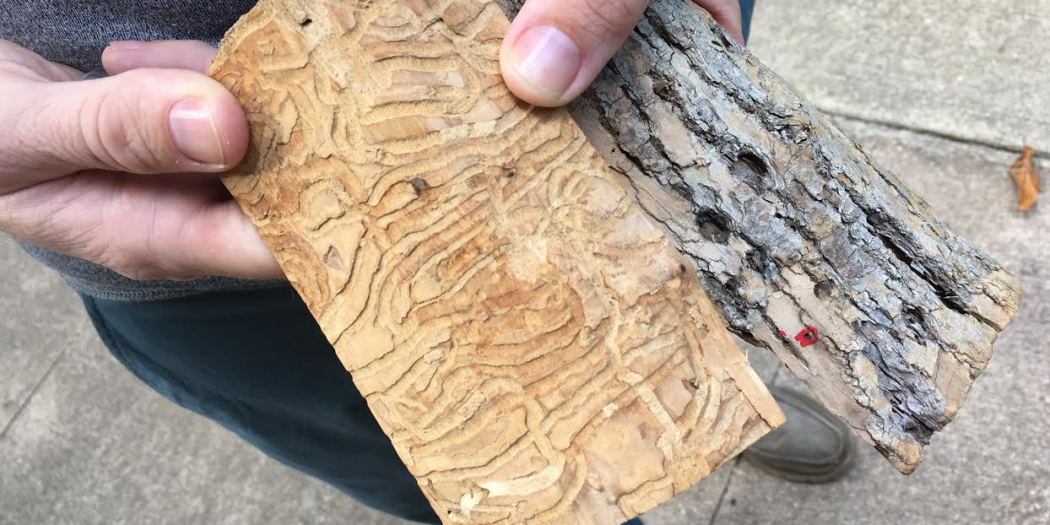 The emerald ash borer beetle lays eggs under the bark of ash trees. When the eggs hatch, the larvae feed on the bark, depriving the tree of food and water. The escape hole in the bark can be seen circled in red. (Gabriela De Almeida/WUFT News)

What Are Those Purple Boxes In Florida’s Trees? They’re Helping To Fight Off Deadly Beetles

In an effort to preserve native ash trees, the United States Department of Agriculture has increased the hiring of private contractors to set up traps in various states. The traps are intended to monitor the presence of the emerald ash borer, an invasive insect that has been killing millions of ash trees since it was first found in the U.S. in 2002.

Dozens of traps were set up across the north Florida region in April and May, but experts have yet to find the emerald ash borers in Florida, said Jeffrey Eickwort, an entomologist in the Forest Health section of Florida Forest Service. Florida has done annual trapping since at least 2004, but it is on a much bigger scale this year to try to catch them as early as possible to prevent infestations. Emerald ash borers were found in Atlanta, Georgia in 2014, and the level of infestation showed they had already been there for a while.

“Part of the reason that they’re increasing the number of traps is that the emerald ash borer has spread so close to Florida at this point,” Eickwort said. “It has now been established in the Atlanta area, and it’s quite possible it could be here already, or in the very near future.”

The traps, which can be seen hanging in various ash trees throughout north Florida, are purple three-sided boxes coated with a sticky substance called Tanglefoot. When insects are attracted to a trap by its purple color and scent, they become stuck. This allows experts to check the traps weekly to monitor for the bugs.

The emerald ash borer is a green jewel beetle native to eastern Asia. It was first seen in the United States in southeastern Michigan in 2002, and it was most likely brought here by international cargo, said Jason Smith, an associate professor of forest pathology.

There are four different species of ash trees distributed throughout most of the state of Florida, especially in wetland areas and other sensitive habitats. In some areas, they’re a popular street-side tree, like here in Gainesville, Eickwort said.

Although Florida has been far away from where the pest was known to be for a long time, experts say the beetles’ natural spreading is not the biggest threat.

“People see a dead tree, they cut it up and put it in the back of their truck, and use it as firewood.” said Jiri Hulcr, an assistant professor of forest entomology, “and that’s how most of these pests have spread so fast — because people help them.”

Eickwort suggests locally disposing of untreated wood products, such as storm debris or dead branches, and purchasing firewood at the location where you plan to burn it, rather than carrying the wood with you and potentially transporting invasive species.

A group of forest health specialists at the University of Florida have set up a forum at sfrc.ufl.edu/treehealth where users can submit photos and questions about their trees and receive a diagnostic and recommended treatments.

Because of forest services and other agencies trying to preserve specimens of ash trees, they will most likely not become genetically extinct. However, ash trees are en route to virtual extinction from urban landscape and forests. In the northeast and midwest, ash trees have already been almost completely eradicated thanks to the emerald ash borer.

Aside from the dangers of falling branches, the death of these trees poses as an ecological and financial threat. The loss of the ash tree is a loss of ecological diversity, and a loss of habitat for many animals, said Eickwort. Hulcr said he estimates cleaning up after invasive species costs the U.S. over 2.5 billion dollars every year.

“The reality is, somebody brought that bug to Michigan, now the entire nation is going to lose an entire tree species,” Hulcr said. “So it is a problem on a national scope that we all need to address.”

This story is a part of Untold Florida, a WUFT News series built from your questions.

Gabriela De Almeida is a reporter for WUFT News and can be reached at 904-607-3127 or dealg@ufl.edu.
Previous Gainesville Police Distributes Vehicle Security Report Cards To Prevent Car Robberies
Next Hearing Will Discuss Project To Replace Old Alligator Building