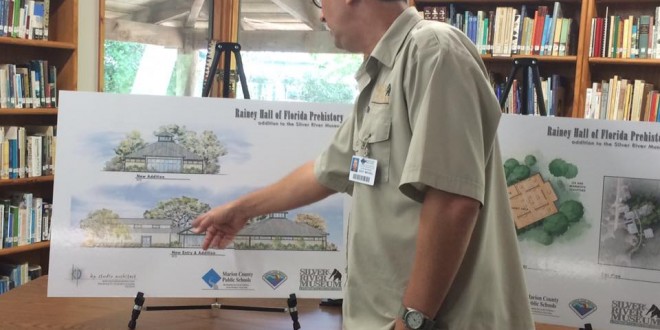 Silver River Museum Director Scott Mitchell points to renderings of the museum's expansion that will hold 30,000 new pieces. The expansion is expected to be completed in three years. (Maggie Lorenz/WUFT News)

Ocala Museum To Get 30K New Items, Double In Size

One of the largest collections of prehistoric Florida artifacts will eventually be housed in the Silver River Museum in Ocala.

The museum announced at its 25th anniversary celebration Friday that 30,000 pieces of archaeological artwork and artifacts from a massive donation will double the museum in size. The celebration was held at the museum and was attended by about 200 people.

The museum’s expansion to accommodate the new pieces is set to begin in about two years, with completion expected in three.

The artifacts date back as far back as 12,000 years and were donated by Belleview native Ike Rainey, who owns Rainey Construction in Florida and will retain the collection until the expansion is complete.

Museum Director Scott Mitchell said the artifacts are from 61 of Florida’s 67 counties.

“So it’s truly representative of the state,” he said. “[Rainey’s] collection is made up of lots of other collections. He purchased prehistoric artwork and artifacts from all over Florida from people that collected them over the years.”

Before, Silver River had about 20,000 objects in its facility, meaning the additions will bring its full collection to roughly 50,000.

Rainey Construction will help build the expansion, and its efforts will be aided by donations from the public and other contractors. Construction doesn’t have an exact cost, but Mitchell estimated it to be in the millions.

Museum volunteer Monty Pharmer, 83, said he has dedicated many hours to organizing and cataloging all of Rainey’s objects.

Pharmer started collecting artifacts himself from Silver Springs in the 1940s and has worked on numerous archaeological collections throughout his life.

“I was asked by [Rainey] if I’d be interested in doing this,” he said, “and of course, I jumped at the opportunity because it’s probably one of the largest collections in the state or in the existence of Florida artifacts.”

Pharmer and his wife, Martha, who also volunteers at the museum, have a numbering system to categorize all of its objects.

“We have photographs of each display, and the items in each display case are numbered one through how many items are in the display,” Monty Pharmer said. “The case itself is also numbered. All of this is recorded in an Excel web sheet so that the information is in one place.”

The Silver River Museum is part of the Marion County Public Schools, which provides its funding.

“It’s great the students get to be hands-on,” schools spokesman Kevin Christian said. “It’s one thing to read about history in a book, but it’s another thing to experience it in person.

“It brings history to life and gives kids the opportunity to be out of the normal classroom into one created by nature.”

Visitor numbers have steadily increased each year for the past 10 years, Mitchell said.

Meanwhile, the upcoming addition has already drawn even more attention among those in Marion County, he added, as well as experts across the country, including staff from the Smithsonian Institution.

Maggie is a reporter who can be contacted by calling 352-392-6397 or emailing news@wuft.org.
Previous Gainesville Mayor’s First Book Club Discusses Racism
Next $1.3M Grant To Bring More Firefighters To Rural Alachua County