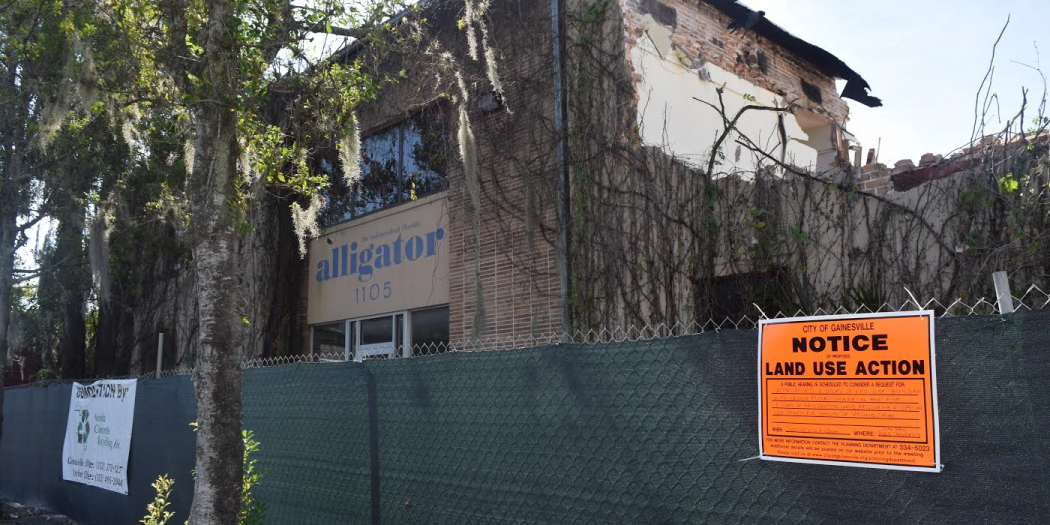 View of the façade of the old building during demolition, 9/9/2016. (Diana Illingworth/WUFT News)

A public hearing will consider the proposal for the establishment of a new building at the old site of the student-run newspaper The Independent Florida Alligator, 1105 W. University Ave.

The hearing will be held Sept. 22 at 6:30 p.m. in City Hall, and it will discuss a six-story, mixed-use building with a commercial ground floor and five floors of residential units, according to a notice posted at the site by the City of Gainesville.

Campus Communications sold the building in February to SMLC, a partnership between Shawn McManus of KLM Property Holdings and Development and Lee Caswell, an Atlanta real estate professional, according to an article from the Gainesville Sun.

Moreover, the demolition of the building that housed the newspaper for more than 30 years started the week of Sept. 5, said Bobby Babcock of Florida Concrete Recycling Inc.

For the past four months, the Alligator has been operating at the Gainesville Sun’s building, 2700 SW 13th St.

“This is the perfect move forward,” said Alligator General Manager Patricia Carey. “It couldn’t be any better because this building is built for a newspaper,” she said, alluding to the bigger parking lot and the recycling center there.

She believes students could benefit from sharing the space with the Gainesville Sun and the New York Times editing center.

The transition, however, was not easy for some staff members. The Alligator’s editor-in-chief, Emily Cochrane, remembers how she felt when she heard the news of the move. “It was disbelief, then sadness, frustration, and then it was resolve,” she said.

Carey said the administration decided to sell the old building, which was built in 1929, because they would rather invest in the paper’s operational costs than on the expensive repairs the place needed.

However, the age and damage of the building were not deal breakers for students who loved working there.

“Yes, there were holes in the wall, and the wiring was a little sketchy in certain places, and occasionally there’d be a possum outside,” Cochrane said. “But saying goodbye to the old building was like saying goodbye to your first car. Yes, you’re getting something with better technology… but the old one holds so many memories, and it’s hard to say goodbye to that, even though you need to.”

Although nostalgic about losing the old building, Carey said she is excited for the new construction project at the site.

“That’s part of progress, and you can’t stop progress,” she said.

Moving farther away from campus was one of the staff’s main concerns. They worried for members who did not have cars and feared losing contributing writers, who are often freshmen or sophomores, because of issues related to transportation, Cochrane said.

After Cochrane and her peers got through the initial shock and coordinated the logistics of the move, they felt the need to bring alumni back and give them an opportunity to say goodbye.

“It was a place where people had written and cried and raged and loved,” she said. “It wasn’t just a place where you went to work. It was a home.”

With two of her co-workers and an Alligator alumna, she organized a farewell party in the building, the evening of April 23. A group of about 100 alumni and current staff members, including a married couple who met at the Alligator, gathered to reconnect with old colleagues, make new friends, and share memories about their time working for the paper, Cochrane said.

They ate pizza from the local restaurant down the street, Leonardo’s By The Slice, the way they normally would on countless nights during their editing shifts. They reminisced as they took pictures with the façade of the building and inside a photo booth.

People were pulling out archives, laughing at their first stories and sharing anecdotes of road trips and all-nighters, she said. By the end of the night, a wall inside the editor-in-chief’s office was covered with signatures and years.

“It was our space,” Cochrane said. “We weren’t renting it from anybody. We owned it, and it was filled with history.”

Cochrane said that the clippings her predecessors had left on the walls decades ago reminded her that she was continuing a line of great work.

Although it will be impossible to replace the old offices with the new, Cochrane is confident that the staff is adaptive to change and the new building will eventually feel like home.

“It’s the start of a new chapter, and I’m grateful to say that I was able to be a part of what was old and what is new,” Cochrane said, adding that she is curious to see how the new building will look. “As long that the place that was really special to us is special to someone else, that’s all I can ask for.”

Editor’s note: Diana Illingworth is a former contributing writer for The Alligator.

Diana Illingworth is a reporter for WUFT News. She be reached at 352-392-6397 or news@wuft.org
Previous What Are Those Purple Boxes In Florida’s Trees? They’re Helping To Fight Off Deadly Beetles
Next September 14, 2016: Afternoon News In 90