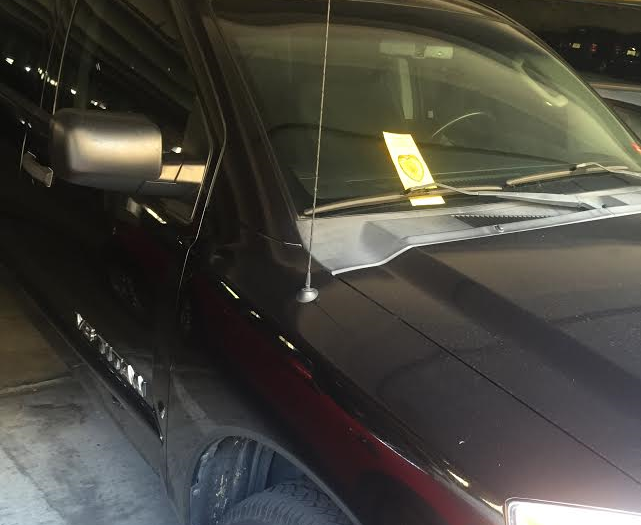 A black Nissan Titan, belonging to Garrett Anderson, sits in the 2nd Avenue Centre parking garage with a Gainesville Police Department-issued “vehicle safety report card” displayed on its windshield. “I know that I’m going to continue to lock my car door and make sure that nothing that anybody can particularly want is in view,” he said. (Kyle Brutman/WUFT News)

According to GPD, cases of car burglary have nearly doubled in the past year, with the department stating that over 450 car burglaries have been investigated so far this year.

One of the main components the GPD has used in raising awareness of the situation is the distribution of car safety assessments throughout the city over Labor Day weekend.

According to Officer Ben Tobias, GPD spokesman, the department placed yellow “vehicle security report cards” on the front windshield of cars in places like parking lots and apartment complex garages.

“We made sure we issued cards to all the cars in the parking lot, pass or fail, so we’re not directing any criminal attention to those cars,” he said.

Tobias said that report cards have been distributed for many years and are given when there is an increase in car burglaries as a means of raising car safety awareness.

The cards indicated whether a vehicle “passed” or “failed” a GPD-conducted exam, which took into account whether doors were left unlocked, valuables were in plain sight, or if a garage door opener was visible, among other factors.

Any vehicles that fell under the categories listed on the slips were considered failures.

Garrett Anderson, a junior political science student at the University of Florida who lives near Downtown Gainesville and owns a black Nissan Titan, was surprised to learn that GPD would try to open someone’s car to see if it was unlocked or not.

“I suppose since it’s testing it’s maybe acceptable,” said Anderson, who passed the vehicle security report card. “But, still, I wish I would’ve gotten a letter, maybe, from our apartment complex.”

Tobias said that between 70 and 80 percent of cars that are issued vehicle security report cards fail the safety test.

“We find that while we’re going out, even if we don’t have the time to issue these report cards, we’re seeing about probably 60 percent of the vehicles in a parking lot are unlocked,” Tobias said.  “So it’s just inviting crime.”

According to GPD’s release, those aiming to burglarize vehicles look for the easiest path, so leaving valuables visible in an unlocked car is essentially inviting thieves to steal from cars.

Amanda Madden, a junior mechanical engineering student at UF and resident at 2nd Avenue Centre, said that she always makes sure that the doors of her 2002 Mitsubishi Lancer are locked, and that her valuables are out of sight.

“My car is not the best car or newest car, but that’s my car,” said Madden, who passed the examination.  “So I try to keep it as safe as possible.”

“No matter where you are in the world, there’s always going to be someone that would want to steal your stuff, unfortunately,” she said.

Tobias said that while the purpose of the slips is to raise awareness, they tend to reveal mixed results.

“We still — every time we go out to these parking lots — we’re seeing plenty of vehicles left unlocked,” he said.  “Slowly, we think it’s getting better.”

After Tobias asked people on social media why they kept their car unlocked, many said that they did not lock their cars because they have nothing of value inside.

“They didn’t care if change was missing out of their vehicles,” Tobias said. “Some people actually said that it’s not their job to make sure that their vehicle is safe, it was the police’s job.”

Recently, the GPD has tried to better relay the message of property protection by introducing Stuff Gruff, a yeti-like character who was seen burglarizing cars around the city in a recent GPD-produced YouTube video.

Stuff Gruff was created by the GPD’s Crime Prevention Unit, and the GPD Facebook page has posted videos featuring the woolly beast.