While homeless people search for a place to stay, the options in Gainesville’s Dignity Village have just been reduced.

Gainesville City Commission members announced on Thursday that the maximum capacity for the homeless community of Dignity Village had been reduced from 200 to about 155 people, which is the number of its current population.

Bob Woods, communications and marketing manager for the City of Gainesville, said the capacity was reduced as a way to relocate people inside of Dignity Village, so the commission could work on a number of hazardous trees in the area.

The city, along with Alachua County arborists, examined the area in early August and determined the potential danger of the trees’ branches, Woods said. With the arrival of Hurricane Hermine the city reduced capacity and relocated residents inside of the community to manage the tree problem.

With the storm already passed, it is not known at the time if the Commission plans to re-establish the maximum capacity of 200 or keep making changes to the community.

“We have room for more than 200,” said Scott Hesch, a resident of Dignity Village.

Hesch questioned the City Commission’s actions as they were carried without consulting the Empowerment Center Oversight Advisory Board, an advisory group that includes city and county commissioners among its members.

Robert Hutchinson, an Alachua County Commissioner and member of the Empowerment Center Oversight Advisory Board, said that [the board] was not consulted for the decision, but acknowledged that the City Commission is the entity who manages Dignity Village.

“Our understanding is they are at capacity right now,” Hutchinson said. “It was a little hard to tell whether the 156th person will be turned away.”

Hutchinson said that the current management and relocation issue of Dignity Village is a difficult problem, especially since at least one-third of the population of the Empowerment Center and Dignity Village is physically disabled.

“Dignity Village was actually an unanticipated consequence of the opening of the empowering center,” Bob Woods said.

As the Empowerment Center’s GRACE Marketplace came to full capacity, people began to set tents around its perimeter, forming a community without management.

Nonetheless, the problems remain as residents of Dignity Village describe the environment as filled with rodents and unprepared for the needs of its community.

Despite the constant issues, Hutchinson said that many people are working toward solutions. He described having a homeless issues meeting filled with 50 people of different agencies and advocacy groups brainstorming solutions for the community.

“It’d be nice if we had an agency for homelessness and is their job to just take care of it,” Hutchinson said. “What we have is this very bifurcated system with all these different organizations, each with their finger in a tiny bit of the pie.”

As many problems relating to homelessness persist, residents maintain that their community has enough space for people at Dignity Village.

“I don’t feel it should really have a limit,” said Brice Kinney, former resident of GRACE marketplace and current resident of Dignity Village. “You just can’t lay on the middle of the freeway.”

Miguel Torrellas is a reporter for WUFT News. He can be reached at miguel.1995@ufl.edu.
@@Migtorrellas95
Previous Sept. 9, 2016: Afternoon News In 90
Next Man Shatters Store Front Glass At Midtown Bar 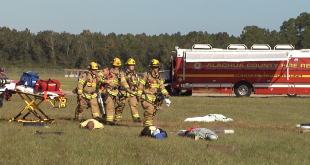