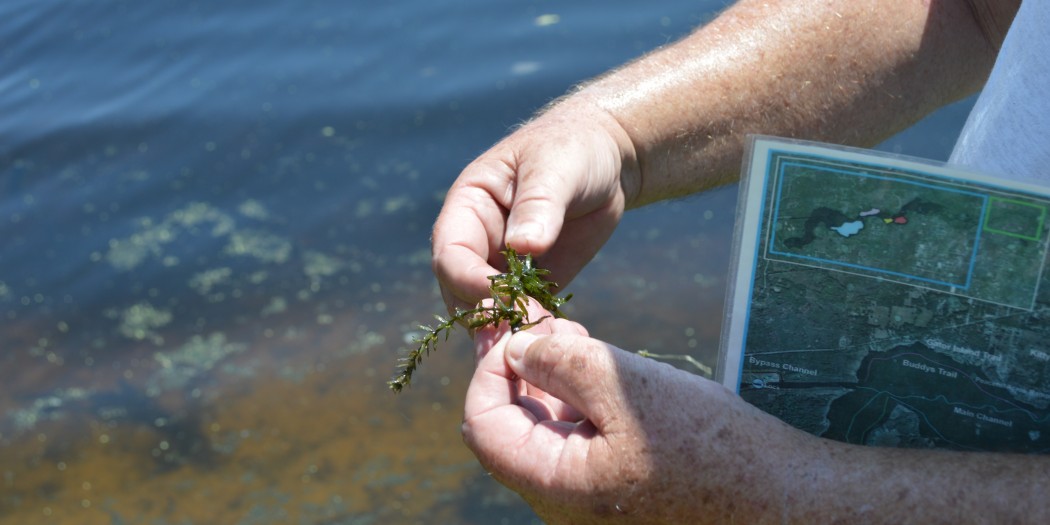 Bruce Jaggers, an invasive plant biologist for the Florida Fish and Wildlife Conservation Commission, holds a piece of hydrilla. Hydrilla is an exotic, invasive plant that is being treated in Lake Rousseau. (Cecilia Mazanec/WUFT News)

Less than two weeks ago, Bruce Jaggers said he looked at Lake Rousseau and saw a hay-field.

Hydrilla, an exotic, invasive plant had covered the water surface in a pale brown canopy, said Jaggers. Jaggers, 63, is an invasive plant management biologist for the Florida Fish and Wildlife Conservation Commission.

Though fishermen and waterfowl hunters love the invasive plant, which they say creates hiding spaces for animals and a home for algae growth, Jaggers was there to kill it, he said.

When Hydrilla creates a mat on the surface, it lowers the oxygen level of the water. Combined with the dark, tannic-stained water brought by the storm from nearby swamps and the Withlacoochee River, some fish weren’t able to breathe.

On Wednesday, following the aftermath of the storm, the spiny plant floated in globs, having been uprooted from the lake floor and rolled together. But some of the damage had already been done.

Standing on a boat ramp along the edge of lake, Jaggers apologized for the smell: dead fish.

Along with other invasive plants, Hydrilla limits navigation because the plants get stuck in boat propellers. This is also problematic because the Hydrilla in Lake Rousseau spreads by fragmentation.

Wednesday, he monitored workers as they spread herbicides along boat trails in the lake.

Two contracted workers from Applied Aquatic Management Inc. drove air boats near the boat ramp of an RV park. Orange hoses trailed the sides of the boats, applying Aquathol K and Diquat, two contact herbicides, to the bases of the Hydrilla.

From Thursday until the following week, they will start to treat other invasive plants: water lettuce and water hyacinth. The warm weather this year has caused all three plants to grow in extreme quantity, Jaggers said.

“Without treating them within a matter of months, they could cover over the whole water body,” he said.

That is exactly what happened in 2004, following the hurricanes that passed through Florida, Jaggers said.

The oxygen level had been too low to use herbicide because the decaying process of the plants also requires oxygen, he said.

In some parts of the lake on Wednesday, the line between clean and covered water surface was so distinct that there appeared to be another shore line.

Despite the workers having cleared a trail by resident’s boat docks, Jaggers said he has heard many complaints from the public about treating the plants so aggressively.

“But if we don’t, things will just explode,” he said.

Jo Hatton, a resident of Crystal River, said she thinks the treatment is a necessity.

Hatton, 69, is the owner of the RV park on the shore of Lake Rousseau. She said she’s seen weeds come up on the boat docks in past years, and as “just a bulge on the side of the river,” she said she thinks she would be trapped without the herbicides.

“I mean, you know, the growth can be really remarkable,” she said. “So I think we’d be sort of locked in.”

Her daughter, Laura Hatton, 42, said there are as many opinions as people.

“A lot of the fishermen don’t want them to be sprayed because it’s good cover for fish,” she said. “More weeds, more fish. And some people think that they’re harmful.”

However, she said, it has to be sprayed if the water is going to be navigable.

Due to rising temperatures this year, the plants have been treated monthly since April, Jaggers said.

After more than a thousand gallons of herbicide used on Hydrilla alone, he thinks the lake should get by without his help for the rest of the year.

Cecilia is a reporter for WUFT News and can be contacted by emailing mazanecc@ufl.edu.
@@CeciliaMazanec
Previous Grace Marketplace Will Expand Services As It Gets New Building
Next Florida Researchers Seek To Replace Harmful Pesticides With Bats