A Gainesville man was arrested and charged with child abuse, domestic battery and criminal mischief Sunday night. Police said he attacked the mother of his child after she refused to have sex with him.

According to the arrest report, Lorne Nero, 22, of 4000 SW 23rd St., was arguing with the woman in her bedroom when he pushed her to the ground, pinned her down and bit her arm. After she pushed him off, Nero threw a chair at the wall, broke her prescription glasses, and destroyed her cell phone. The couple’s child was in the room at the time of the attack.

After throwing the bedroom door open, Nero picked up their child and left the room. When the victim took the child from him, Nero became “enraged,” grabbed the victim by the neck and attempted to force a shirt into her mouth to keep her from screaming.

The report states that after a neighbor heard yelling, including screams of, “Give me back my baby,” and “stop hurting me,” she began knocking on the door and demanded to be let in. Shortly after answering the door, Nero left the apartment and drove away.

Officers later apprehended Nero during a traffic stop at 3400 SW Archer Road, where he was arrested and transferred to the Alachua County Jail. During the stop, he admitted that he had thrown a chair and broke the victim’s phone, but denied hitting or biting her, and said that he would pay for the damages. 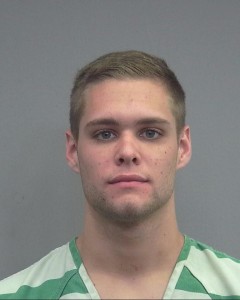 Nero was released Tuesday on signature bond. He also signed a no contact order, agreed to wear an alcohol monitor and agreed that he would have no unsupervised contact with minors.

As of Wednesday afternoon, a court date has not been set for Nero’s case.

According to Alachua County Court records, Nero was arrested in 2013 on charges that included domestic violence, child abuse and criminal mischief after he attacked his 17-year-old girlfriend, who is a different victim than the one concerning this recent case. The arrest report states that he scratched, bit and attempted to strangle the victim, in addition to destroying her cell phone and preventing her from leaving his home.

As part of a deal for pleading no contest to those charges, Nero was granted a suspended sentence, which included three years of probation, 150 hours of community service, and a no contact order with the victim. He was found guilty of breaking the terms of his probation in 2014, and was sentenced to 120 days in jail.