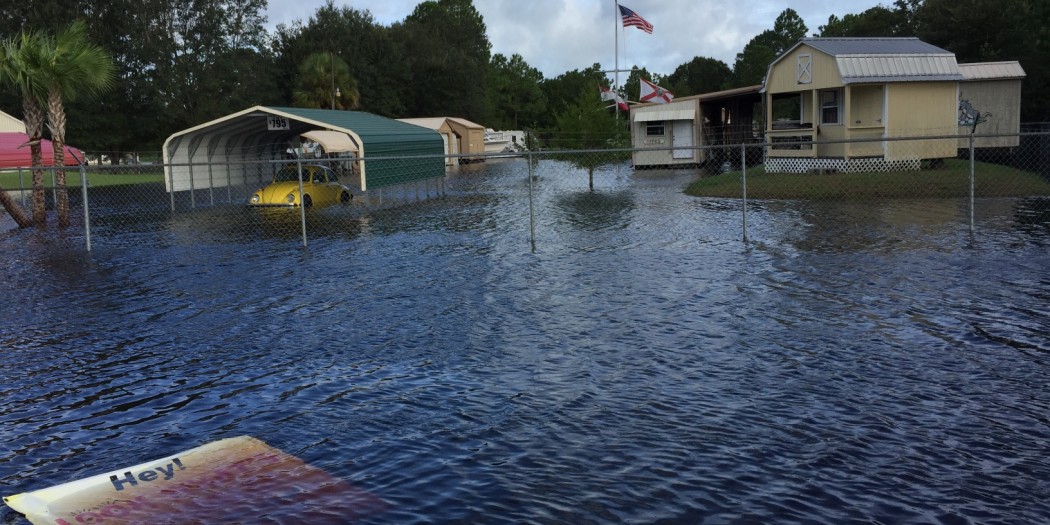 The National Hurricane Center reported as of 5 a.m. EDT Friday, Hermine is weakening as it moves into southern Georgia.

Tens of thousands of Duke Energy, GRU and Clay Electric customers are without power across North Central Florida.

If you see downed trees on a public road or right-of-way in Alachua County, call 352-955-1818 to report the situation.

The Special Needs Shelter located at the Gainesville/Alachua County Senior Center (5701 N.W. 34th Blvd, Gainesville) remains open. This shelter is for those with special needs, such as oxygen dependency and electricity dependency (to power life-sustaining machines). Those in need of transportation assistance, please call 352-955-2577. If possible, please call this number prior to going to to be certain this shelter can adequately meet your needs.
The general population shelters at the Easton Newberry Sports Complex and Eastside High School are closed.
Marion County Sheriff’s Office is reporting one death from the storm when a tree fell on a man in a tent residing in a homeless camp.
Levy County School’s Asst. Superintendent John Lott reporting all school activities are cancelled tonight.

The tornado warnings continue for Dixie, Lafayette, and Taylor until 11 p.m.

Tornado warnings have been issued for Dixie, Lafayette, and Taylor County until 9:30 p.m.

In the latest update on the storm, Governor Scott said the storm surge has become worse.

“Twelve feet of storm surge, that is life-threatening,” the Governor said. “We have significant risk for tornadoes,” he added.

Scott has reached out to sheriffs in 51 counties. He also had a phone conversation with the Governor of Texas, Greg Abbott, who offered his support. He said the decision on state office closures on Friday will be made tomorrow.

Scott warned high winds may knock down trees and power lines, urging people to call the authorities if they see downed lines and not to touch them. He also urged to clear out any standing water near your home or business because of increased risk of Zika exposure and told people not to drive into standing water.

“We’re going to hope for the best, and we’re going to prepare for the worst,” stated Scott. Talking to journalists he also mentioned that “you should assume that you’re going to lose power and hope that you don’t”.

Updates on evacuation are available at floridadisaster.org/publicmapping.

“More than 20 counties have now closed their schools. I did a state of emergency in 51 counties,” Scott said today during the press conference. He also mentioned that some areas could be out of power for several days. “Everybody needs to be prepared,” he added.

Scott ordered the closing of offices at noon Thursday due to the looming threat of Tropical Storm Hermine, which is expected to swell into a hurricane before slamming into the state’s Panhandle.

The latest forecast Thursday morning had Hermine’s top sustained winds at about 60 mph as it approached Florida’s upper Gulf coast. If it reaches hurricane strength, Category 1 wind speeds are between 74 mph and 95 mph, forecasters say.

The hurricane center also predicts storm surge along the coast to vary between one and three feet above ground level.

Scott said during a press briefing on Wednesday at the Alachua County Emergency Operations Center the state’s emergency management teams, state emergency operation centers and local management teams are ready for the impact the storm may bring.

He also spoke about the problem the storm may pose in relation to the increasing amount of Zika cases in Florida.

“The most important thing that every Floridian has to do right now is get rid of standing water,” Scott said. “We are going to have standing water after this storm.”

Florida residents are advised to follow the news and if they haven’t made a plan, to visit flgetaplan.com.

Sheriff Sadie Darnell also spoke at the press conference and encouraged residents to have a plan and be prepared.

“This is something to be taken seriously, it could have a massive effect, either from the rain or the wind damage, and structure damage,” she said.

Governor Scott declared a state of emergency in 42 counties this morning ahead of the storm. Scott held a briefing at 1:30 p.m. today at the Alachua County Emergency Operation Center.

The tropical storm strengthened from a tropical depression today. The storm is expected to make landfall on the west coast of Florida late Thursday night. Current wind gusts are at a maximum of 35 miles per hour, but higher gusts are possible.

Florida’s price gouging law only applies within the 42 counties of the declared state of emergency. The law prohibits extreme increases in the price of essential commodities, including food, ice, gas, hotels, lumber and water during this sate of emergency.

Anyone who suspects price gouging should report by calling 1-866-9-NO-SCAM.

This is a developing story. WUFT News reporters will be tracking preparation plans, shelter openings, evacuation notices, school closures and more. Check back here for updates.

The National Weather Service in Jacksonville has issued a flood watch through Friday afternoon in Alachua County.

Tropical storm force winds from 30 to 40 miles per hour with higher gusts are anticipated to begin Thursday night around 10:00 p.m. Rain fall is could reach 4 to 6 inches, with as much as 10 inches possible. There is the potential for isolated tornadoes and localized flooding.

Sandbags are available from Alachua County Public Works at 11855 NW US HWY 441. The station is open from 7:30 a.m. to 5:00 p.m. Sandbags will be limited to 10 bags per resident, with bags and sand provided. Residents should bring a shovel as they will be required to fill their own bags.

The City of Gainesville is also providing sandbags at 405 Northwest 39th Avenue today. Sandbags are limited to 10 per vehicle.

For more information about sandbags, contact the Alachua County Public Works Department at 352-374-5245.

Baker County Schools are open on Thursday, but after-school activities are cancelled. The Baker County School District said they are going to close schools on Friday and reopen on Tuesday because of Monday’s holiday.

The National Weather Service in Jacksonville has issued a flood watch through Friday afternoon in Bradford County.

Sandbags are available at the City of Starke’s Purchasing Yard at 601 N Orange Street. The limit is 40 bags per vehicle.

Schools will be closed on Friday. They are still determining if they are going to open shelters in schools.

Schools will be closed on Thursday, no decision on Friday.

The National Weather Service in Jacksonville has issued a flood watch through Friday afternoon in Clay County.

Clay County Schools are open on Thursday, but after-school activities are cancelled. Schools will be also closed on Friday. Lake Asbury Junior High School is open today at 5 as a General Special Needs Shelter.

Schools will be open on Thursday. Columbia County is going to close schools on Friday to reopen on Tuesday.

Tornado warning for Dixie until 9:30 p.m.

Dixie County Schools are closed on Thursday and Friday. A shelter will open at Old Town Elementary School at 8:00 a.m. on Thursday.

Gilchrist County Schools are closed on Thursday and Friday. School events scheduled for Thursday will also be cancelled. A decision has not been made about the Bell High School and Trenton High School varsity football game Friday night.

Bell High School will be used as a shelter only for people with special needs in Gilchrist and Dixie Counties. It will be open starting Thursday at 8 a.m. The school will use its health academy staffed by the local health department, and will be equipped to handle any medical needs.

A decision has not been made on whether sandbags will be issued to residents in the area.

County administrator Bobby Crosby advises residents to monitor their local news as well as the county’s Facebook and website for updates on the storm.

Government offices will be open Friday with normal business hours.

Hernando County Schools are closed Thursday. There is no decision about Friday yet. After school activities are cancelled on Wednesday and Thursday.

A tornado warning has been issued for parts of Lafayette until 9:15 p.m.

Lafayette County Schools are closed on Thursday and Friday.

The National Weather Service has issued a tidal surge that is predicted to reach 11 feet above Mean Sea Level. Residents should evacuate immediately if the area is affected by the surge.

Levy County Sheriff’s Office and Levy County Emergency Management will issue a voluntary evacuation notice for residents the live in evacuation zones west of U.S. Highway 19. The National Weather Service is predicting a tidal surge between 5 to 7 feet and 8 to 10 inches of rain. Tornado warnings for Levy County are being issued prior to and during the storm.

A shelter at the old Williston High School Cafeteria at 427 West Noble Avenue will be open at 4 p.m. on Wednesday. Pets will not be allowed in the shelter. The shelter is only for affected residents on the west side of U.S. Highway 19 from the Suwannee River south to Yankeeetown.

For those unable to make alternate arrangements for their pets, they may be boarded at Levy County Animal Services at 12055 NE 68th Lane in Bronson. Pet owners are required to bring their own crates and food. Pets will not be accepted without proof of current rabies vaccination.

Emergency response to affected areas will be suspended when winds in excess of 40 miles an hour are reached.

Road CR 40 at the Yankeetown General Store has been closed due to flooding. SR 24 at the Number 4 Bridge has also been closed.

The National Weather Service in Jacksonville has issued a flood watch through Friday afternoon in Marion County.

The City of Ocala has sandbag stations at the corner of 8th Aveneue and 14th Street, just north of Tuscawilla Park and at the corner of State Road 40 and Martin Luther King, Jr. Blvd. Stations will be open from 8:00 a.m. to 6:00 p.m. Sandbags will be provided with no charge to Ocala residents; the limit is 10 per resident.

The National Weather Service in Jacksonville has issued a flood watch through Friday afternoon in Putnam County.

Schools are open on Thursday, but after school activities have been cancelled. Schools and district offices will be closed on Friday. Putnam will also be sending out robocalls to parents of students. “The Palatka High School football game Friday night against Ponta Vedra will be rescheduled at a future date. Interlachen High School will host Hawthorne High School Saturday at 11 a.m. Crescent City High School’s football game is away at The Villages and is still scheduled for Friday night at this time,” the Putnam County School District office reported.

A tornado warning has issued for a portion of Taylor county.

Union County Schools are open Thursday. Union County schools will be closed on Friday and reopen on Tuesday.

Compiled from staff and wire services.