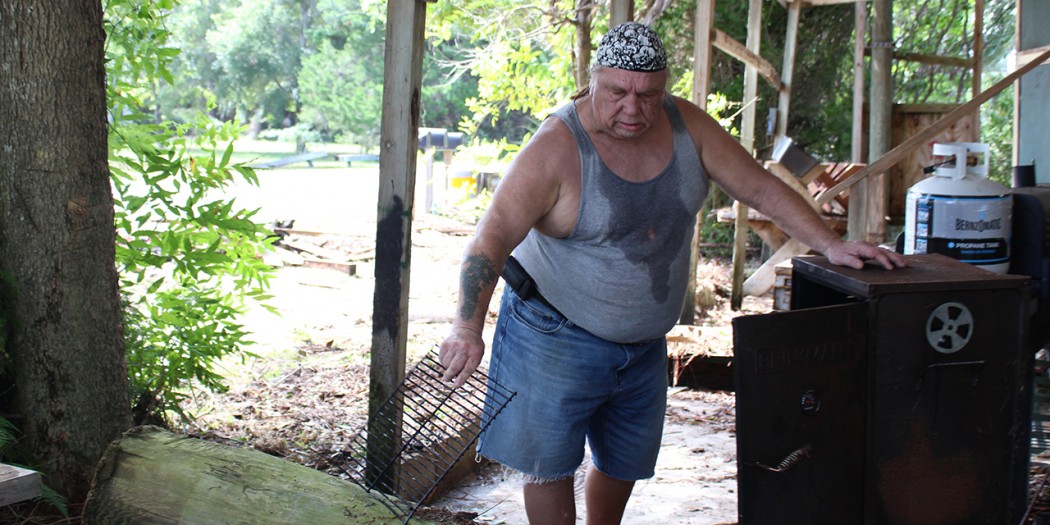 Tiawua Lindley, who said he repairs bicycles for a living, continues to clean up around his house after Hurricane Hermine. "I'll just go back on with my life after this," he said, shrugging. (Briana Erickson/WUFT News)

Cedar Key Digs Out Among Dead Birds And Ashes After Hermine

Until 11 a.m., officials blocked nearly 40 cars off the bridge leading into Cedar Key Island, which had been covered in water until early morning. Residents and business owners are now allowed to enter.

Not too far past the bridge sat a blackened building, what’s left of a local clam farm that has been in the area for at least 25 years.

“There was no loss of life,” said Joseph Cannon, manager of Cedar Key Gulf Coast Gold, whose shop burned down Thursday night during an electrical fire. “These people are tough; everybody will come out of it. These people care.”

Firefighters, knee deep in rainwater, fought the fire all night until the morning, Cannon said, but lost.

Cannon worries about the millions of dollars of clams he said are underwater and hopes they weren’t buried by the storm.

As Friday moved along, the bright sun and humid air showed no indication of the feet of rain that plagued some homes and business as residents tried to clean debris and assess the damage left by the storm.

While a couple got ice and filled up with gas, their two black and white dogs, Ruby and Diamond, chased birds and ran through three feet of rain and leftover standing water near the Cedar Key General Store. A tree knocked out power at a nearby RV camp and residents were desperate to get ice, said Bill Stanley, a local.

Stanley, 42, went to the general store to get ice for his fridge. He said some businesses were under eight-and-a-half feet of rain at one point.

“This is an emergency,” Stanley said as his feet dug into the muddy sludge, and his motorized utility vehicle buzzed through the rainwater. He was in a rush to move food out of his refrigerator, he said.

Perry Wallace, a delivery driver for Cook Seafood, waited to cross the bridge Friday morning with a truck full of clams and oysters. He took them all out of the coolers Thursday night, he said, and had yet to see what the effects of the storm were.

Wallace said he worries the storm might affect the area’s seafood industry. “The runoff brings so many nutrients, it makes ‘em [oysters] close up.”

Previous Photos: Hurricane Hermine
Next Gainesville To Allow Alcohol In Vehicles for Hire