The Faraway Inn sits just on the water’s edge in Cedar Key.

Its waterfront cottages are especially popular during holidays, but this Labor Day the inn expects a change in occupancy because of Tropical Storm Hermine.

The Faraway Inn is located on the corner of Third Street and G Street in Cedar Key. When severe weather, such as Tropical Storm Hermine, causes a storm surge, the three rooms facing the water flood. So, too, does the main road surrounding the rooms.

Jamie Naff, housekeeper at the Faraway Inn, said staff takes precaution by removing anything that could be damaged in buildings 10, 11 and 12. The water immediately floods into building 12 as the storm drain overflows and the surge pushes water over the bank.

To combat this, Naff said the inn staff takes everything that could float away out of the buildings. She said they also take out anything that could be permanently damaged, such as the air conditioning units.

“Nobody really knows what (the storm) is going to do. It’s all still up in the air,” Naff said. “So you prepare and hope for the best. It’s all you can do.”

When the water pours over the bank and onto the street, the flooding is too much for the storm drains, Naff said. That is when the rooms along the water begin to flood.

The city has provided sandbags for residents to use to combat against the water, but Naff said the inn doesn’t plan on using them.

Oliver Bauer, Faraway Inn’s owner, said the most significant damage he has seen to the inn was in the years following 2001, when he first bought it. 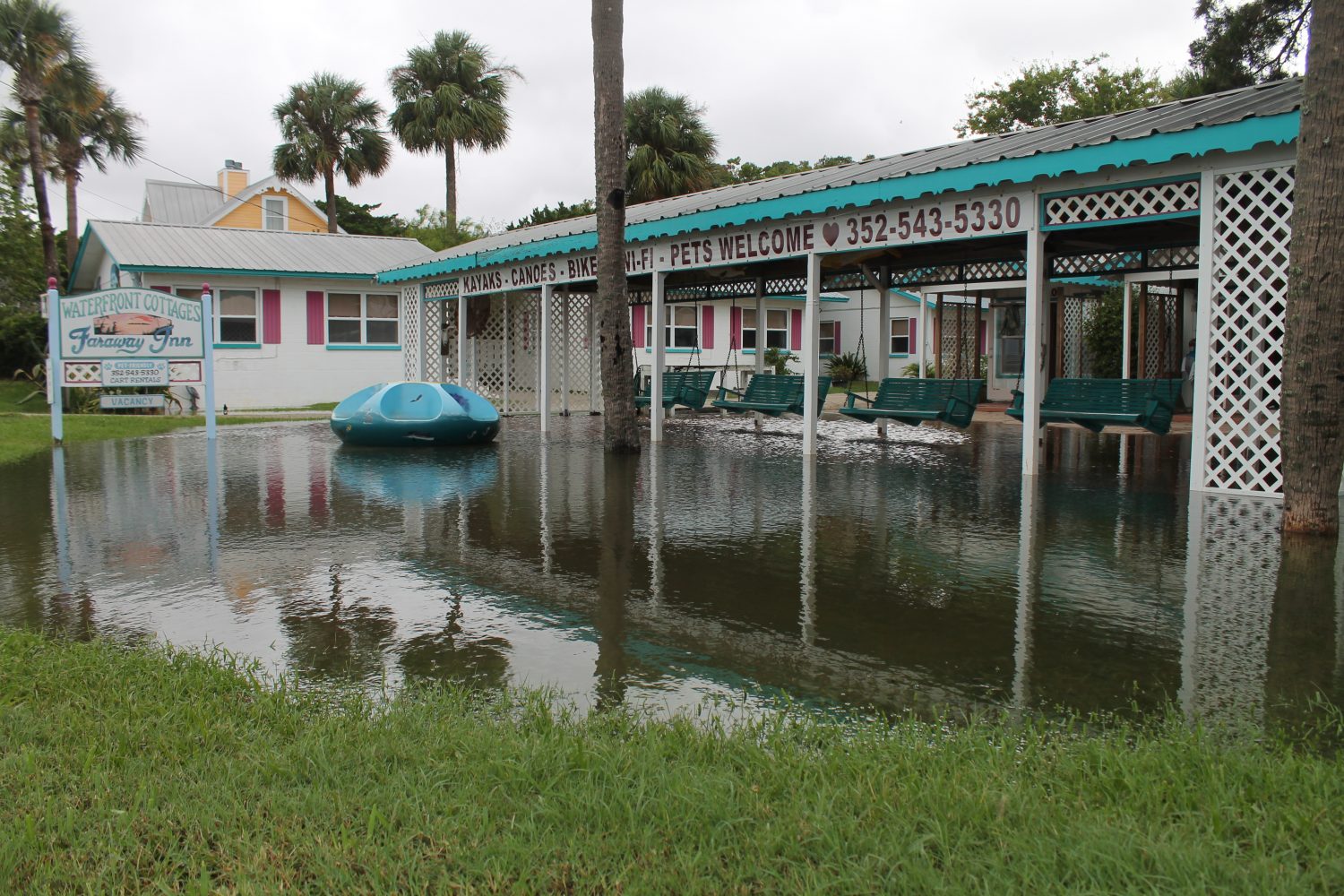 “In the beginning with the ’04 storms, we were boarding up windows but those were actual hurricanes with 70 to 80 mile an hour winds,” Bauer said. “I don’t think this is going to be anything like that. I think this is just going to be a flooding event.”

Cedar Key police chief Virgil Sandlin said the city is preparing for a 5 to 7-foot storm surge, which will put Second Street — the street where city hall sits — in knee deep water from A Street to D Street.

Levy County schools will be closed on Thursday and Friday as the Hermine passes.

Cedar Key residents can pick up the bags at city hall and fill them with sand at the community center. Residents will need to bring their own shovel to fill the bags, Sandlin said.

Sandlin said the impact will depend on what time the storm hits with the tide, and you should stock up on supplies and stay put if you don’t have to be anywhere.

“I would request if you are not from Cedar Key to wait until (the storm) is over with and then come to Cedar Key,” the chief said.

Jennie Pinto has lived in Cedar Key for 39 years. She said she doesn’t think there is anything to worry about, but she is getting five sand bags for her vacation rental.

Pinto handles 11 vacation rentals, but she is only concerned with one.

Her main concern is the tide surge.

“The tide will come in and go back out,” Pinto said. “I just don’t want to have to replace furniture. Not again. We’ve done this before, but I think overall we’re going to be just dandy.”

Samantha is a reporter for WUFT News and can be reached at news@wuft.org or 352-392-6397.
Previous Why Gainesville’s Traffic Light Sensors Sometimes Don’t Detect Scooters and Bicycles
Next Gilchrist County Closes Schools With Tropical Storm Hermine Closing In