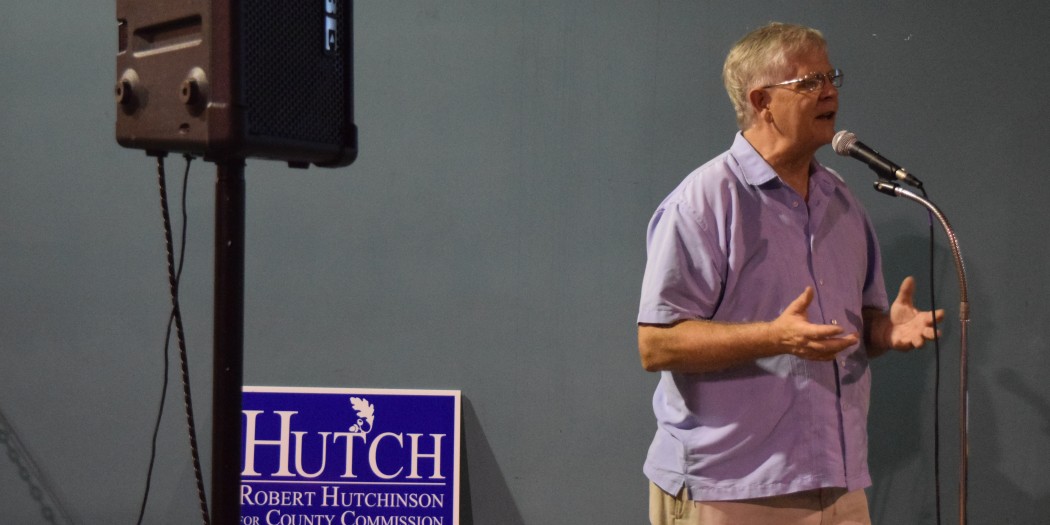 By Laura Cardona and Cassandra Alamilla

He attributes his victory to the hard work by the people that worked on his campaign.

“This campaign was very much a few individuals until the last couple of months and then it really kicked into grassroots mode,” he said, “and that’s what made the difference.”

He said he decided to run again because he is not done with his work in the areas of mental health, substance abuse and homelessness issues.

Hutchinson is known for his platforms on issues including mental illness, the environment and economic development in east Gainesville. He has also recently proposed that the sheriff’s office issue citations to marijuana suspects rather than arresting them.

One of his goals is to ensure that everybody in the community has access to mental health first aid. He also plans to focus on economic growth in east Gainesville through partnerships.

However, the race is not over yet. Hutchinson will have to face write-in candidate Sarah Payne Bliss on the November ballot, but he is not worried.

“No write-in candidate has ever won in the state of Florida and she’s not running a campaign,” he said. “So I don’t think that’s really an issue.”

He said the real issue lies in community divisiveness over environmental, economic and growth management issues.

“There’s no reason for these campaigns to become this rankerous. We ought to as a community have a lot more ability to find the center and to make things work,” he said.

This would be Hutchinson’s third overall term as commissioner. He first served the Alachua County Commission from 1998 to 2002, and was elected again in 2012.

Hutchinson celebrated with supporters at First Magnitude Brewery in Gainesville. Among them was District Four City Commissioner Adrian Hayes-Santos, who said he is expecting a greater amount of cooperation between the city and the county during Hutchinson’s possible reelection.

“I think hutch has had a lifetime of serving the community and I think he has a lot more to do on the commission. He’s really the best person for the job,” Hayes-Santos said.

While Hutchinson was celebrating his reelection, Larry McDaniel encouraged and thanked his supporters at the Last Chance Banquet Hall, where they gathered together to watch the results.

He spoke calmly and started his speech with an analogy.

McDaniel encouraged his supporters to not be discouraged.

“We can’t, you know, put our head in the sand and say we lost,” he said. “The only thing we lost is the next opportunity that’s going to come for us and we can regain that.”

One of his supporters and good friend, 56 year-old Joe Lipsey, was not discouraged and thinks the campaign went well considering McDaniel’s late entry into the race.

“We ran a great race. We ran an honorable race,” Lipsey said. “It was direct and straightforward.”

Lipsey and McDaniel has worked together in the Alachua County Court Services for 10 years but have known each other for 13 years. Lipsey volunteered to help with the campaign.

McDaniel said the campaign was a rewarding experience. He will reflect on this experience and evaluate his strengths and weaknesses for future involvement in the community. But it is too soon to tell if he will run for office again.

He received endorsements from the African American Accountability Alliance of Alachua County and the North Central Florida Chapter of the Florida Police Benevolent Association.

Laura is a reporter for WUFT News and can be contacted by calling 352-392-6397 or emailing news@wuft.org.
@laura_cardona95
Previous Mike Byerly Narrowly Holds Off Kevin Thorpe In Bid To Keep His Alachua County Commission Seat
Next Late At Night, Rep. Dennis Baxley Wins Florida State Senate District 12