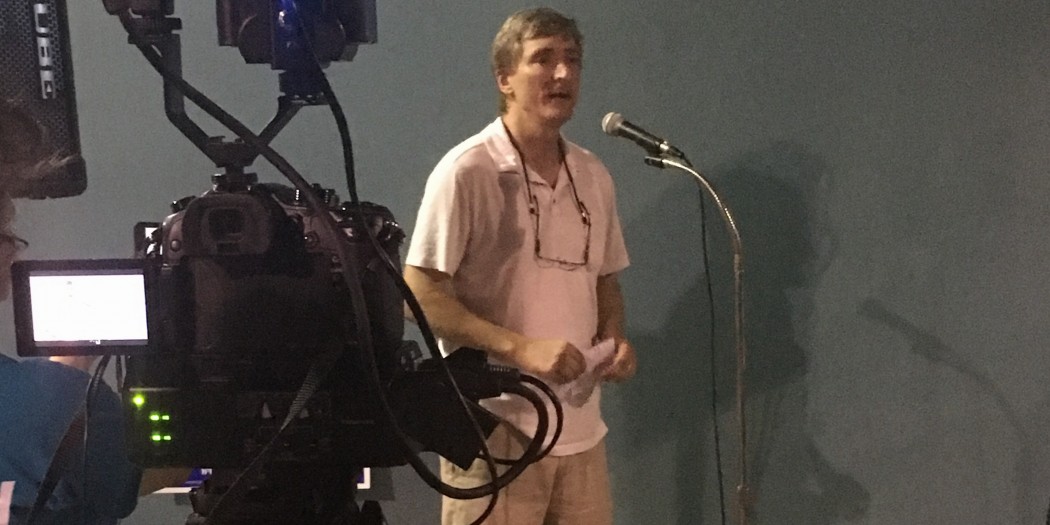 Byerly was running against small business owner and Pastor Kevin W. Thorpe, who has served the Gainesville community for the past 15 years, as well as write-in candidate Captain Craig A. Herda. Byerly won with 1,259 more votes than Thorpe.

First Magnitude Brewery hosted a watch party Tuesday evening for Byerly and District 3 candidate Robert Hutchinson. About 100 locals sported their campaign shirts, pins and ‘I voted’ stickers at the brewery.

Among them was Carol Gordon, who talked about why she felt she needed to vote for Byerly.

“I think this is a particularly critical election because Alachua County is facing some challenges that we haven’t faced before,” Gordon said. “One of our primary focuses is on trying to protect our natural resources. If Byerly loses, that’s gonna be extremely difficult in the new climate with a new commission.”

“He’s got a long history supporting environmental issues in the county,” Nugent said. “I think if we have a good environment, we have good quality of life.”

Mike Byerly thanked those that made his campaign possible at the end of the night, emphasizing his appreciation for his volunteers.

“We feel good because we worked as hard as we could,” Byerly said. “This is my fifth campaign and I think we’ve worked longer and harder and had more people working with us to get over the finish line than we’ve ever had before and that’s the best you can do.”

Besides Thorpe, supporters of these candidates also went to the hall:

When the final numbers went up, Thorpe said he still felt great given the amount of support from the community throughout his campaign.

“We got millennials involved in this process. We got a lot accomplished,” he said. “We brought attention to issues like roads, education, vocational training.

“Now, it becomes the responsibility of the community to demand that these requests become reality.”

Throughout the night, his supporters gathered on red, white and blue tables. Thorpe said a blessing before the crowd ate barbecue chicken legs, cookies, and other food.

He was all smiles as he greeted Gainesville City Commissioner Craig Carter Tuesday evening.

“I hope tonight’s your season,” Carter told Thorpe, shaking his hand, before the numbers came in.

As the votes from precincts trickled in, Thorpe at times trailed Byerly by nearly 10 percentage points.

Sheryl Bennett, a local minister, hoped for the best. At least 80 people changed their party affiliation to Democrat to vote for Thorpe, she said. “He would be a good bridge between two factions of the community,” she said.

“There’s a lot of work to be done, and I’m not the kind of person who can sit by and allow those injustices to take place,” he said.

Thorpe, who ran in 2014 against Ken Cornell for County Commission District Four, said he’s open to future opportunities in office in Alachua County.

“It’s still quite fresh, it’s election night, but for the amount of folks who came out and participated in this process,” he said, smiling. “We’ll see what the future holds.”

Oriana is a WUFT reporter who can be contacted by email at oribravo1@ufl.edu or Twitter at @oridbravo
@Oridbravo
Previous Sadie Darnell Will Face Jack Jacobs in General Election for Alachua County Sheriff
Next Robert Hutchinson Earns More Than 60 Percent of Vote In County Commission’s Democratic Primary

The Alachua County Board of Commissioners unanimously agreed that a new statue will honor the work of late Dr. Patricia Hilliard-Nunn.