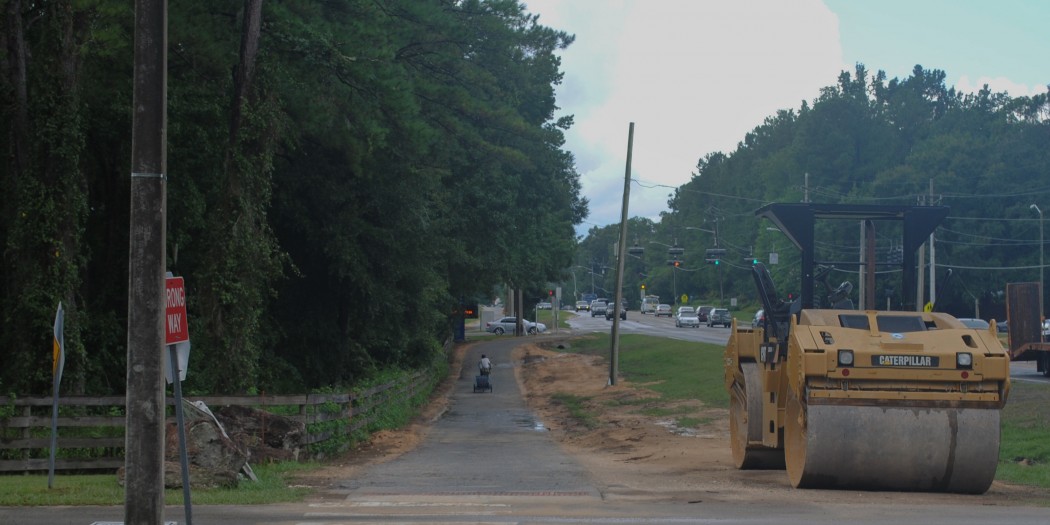 Sidewalk along Archer Braid Trail to be paved Wednesday, August 31 and cleaned up by following week as plans for road construction down Tower Road become approved for 2017 by the Board of County Commissioners. (Carolina LaFuente/WUFTNews)

Alachua County plans to start resurfacing the bumpy parts of Tower Road and the damaged sidewalks along it sometime in 2017, with the hope of easing traffic conditions.

Alachua County Public Works’ plan of almost $4.5 million — called the Really Simple Plan for Tower Road — was approved by the county commission in August. It was first considered in November 2011 but was put on hold pending funding.

A specific start date within 2017 hasn’t been decided yet.

Last Thursday, Ramon D. Gavarrete, County Engineer for Alachua County Public Works, released a crash analysis along Tower Road. The analysis listed 280 crashes on SW 75th St. between 2011 and 2015, with the highest crash type occurrence being rear end collisions with another vehicle followed by left turns. Twelve of the crashes that occurred potentially could be corrected by paved shoulders.

Franilya Lawson, a parent of two students at Kimball Wiles Elementary School, which is on Tower Road, said she’s excited about the project because of its potential to improve traffic congestion.

“It takes literally like an hour to get from Archer Road to Wiles in the morning,” said Lawson, a student at Santa Fe College. “Hopefully moving forward, the street will become a lot better as far as traffic.”

The walking and biking path will be an asphalted one that extends the Archer Braid Trail, which runs parallel to Archer Road before twisting toward Tower Road and finishing at Kanapaha Park. The Archer Braid Trail is itself a newly completed project, with construction wrapping up earlier this month.

The bulk of the project funding — $3.5 million — will come from the county, while the trail portion is expected to be funded by a state grant of roughly $950,000.

But if the state turns down Alachua County’s grant application for the $950,000, the funding would have to be further discussed with the county commission, Singleton said. A final decision on the state grant should be issued by the end of 2016.

Carolina is a reporter for WUFT News. She can be reached at news@wuft.org or 352-392-6397.
Previous Alachua County Commissioner, Sheriff’s Office At Odds Over Marijuana Citations
Next Alachua County voters are going to the polls