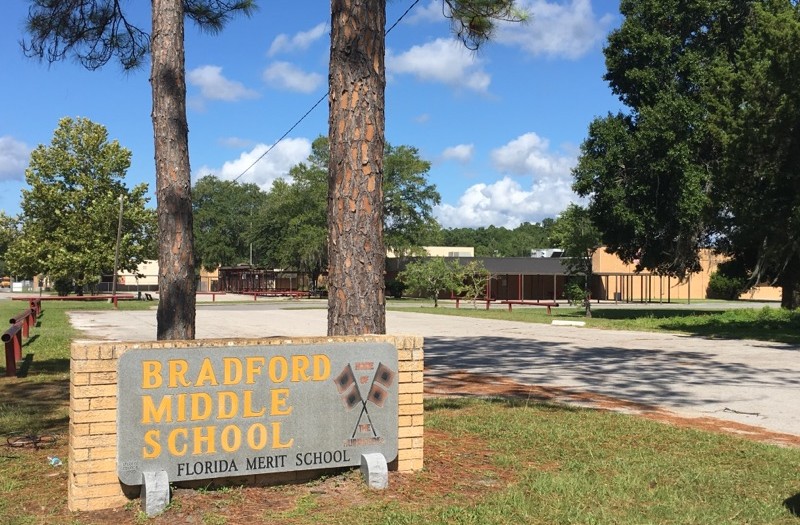 Bradford Middle School was closed on Monday after a 15-year-old student left a threatening voicemail directed at the school. (Daniel Smithson/WUFT News)

By Daniel Smithson and TJ Pyche

Updated, Aug. 30, 2016 at 4:30 a.m.: Some Bradford County School District parents said that they were not aware of the school closings in Bradford County due to a threatening voicemail directed toward Bradford Middle School.

Misty Key, 31, has two children who attend schools in Bradford County. Key said she did not receive a phone call from the Bradford County School District nor from Starke Elementary School and Bradford Middle School where her daughter and son attend respectively. She found out about the closure when arriving at Starke Elementary School to drop off her daughter. A police officer greeted her when she got there and told her about the threat.

Key said she recently moved to Bradford County and said she doesn’t know why she didn’t receive a phone call.

Bradford County Superintendent of Schools Chad Farnsworth said there were very few people who didn’t get the call-out message of the school closure. He said it’s likely that the parents who didn’t receive a phone call have an outdated phone number.

“We encourage our parents to double check with the front office at their school to make sure we have their correct number on file,” he said.

Farnsworth said he would have liked to make a call-out around 9 p.m., but there is also a restriction on the school board’s system — calls cannot be made after a certain time.

“We have actually reached less people in the past when the call outs have been later at night,” he said. “We felt like we did a good job on social media, but unfortunately there were a few who were left unaware.“

As for the suspect, Starke Police Department Maj. Barry Warren said the Bradford Middle School student who made the threat is facing charges of making a felony bomb threat, a misdemeanor charge of interfering with school administration functions, and felony intimidating and threatening a witness.

Warren said the 15-year-old male student, whose name was not released, confessed to the threat after one of his friends turned him into police. Warren said the suspect had been making threats to his friend.

Farnsworth said he hopes the consequences facing the student will prevent others from doing this in the future.

“That’s our goal — is to break the cycle and to make sure they’re getting a safe education and move forward with a prosperous life,” Farnsworth said.

Not all parents expressed issues with how officials handled the situation. Tasha Holloway, a Bradford County resident, said she found out about the school closure on Facebook. She said she was worried but happy with local law enforcement.

“I think Bradford County Sheriff’s Office did what they should to handle the situation, and they’re doing an awesome job,” she said.

The student was turned in by a friend this morning, according to a press conference this afternoon with Starke Police Department Maj. Barry Warren and Bradford County School District Superintendent Chad Farnsworth.

Updated, 12:01 p.m.: The Starke Police Department has a person in custody connected to the threat made to Bradford Middle School on Sunday night.

Because it’s a juvenile, no name will be released, Starke police told WUFT.

The Bradford County School District shut down its schools for today after Starke’s Bradford Middle School received a threat by voicemail on Sunday night.

The nature of the threat is not yet known.

Many of those who commented on the page were grateful that the district was taking the threat seriously, while others indicated that they were upset that the robo-call system did not notify them earlier.

WUFT News will provide more information as it becomes available.

Daniel Smithson is a reporter for WUFT News and can be contacted by calling 850-516-6659 or emailing danielsmithson@ufl.edu.
@DanielTSmithson
Previous The Point Podcast: Kent Fuchs’ 2016 State of the University Address
Next Guns Missing In Uptick Of Gainesville, Alachua County Car Burglaries