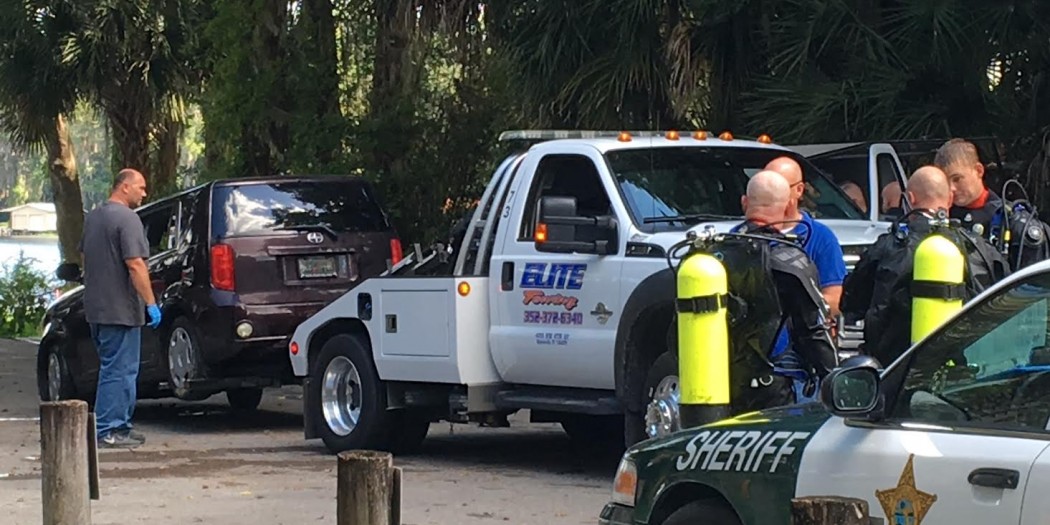 Elite Towing of Gainesville pulls a car out of Lake Santa Fe in Melrose, Fla. Wednesday, August 23, 2016. Alachua County Sheriff's Office found Joel Costantino, 68, of Melrose, dead in the vehicle after receiving a call about the submerged vehicle early in the morning. (Patricia Ochoa/WUFT News).

By Megan Kearney and Patricia Ochoa

Alachua County Sheriff’s Office deputies are investigating the death of a Melrose man whose body was found in a vehicle submerged in Lake Santa Fe.

The sheriff’s office received a call at 7:11 a.m. Wednesday about a car in the lake near the Trout Street boat ramp.

One of the two deputies responding to the call was a member of the ACSO’s Marine Operations and Underwater Recovery Team. The deputy changed into his dive gear and swam out to the car where he found Constantino in the vehicle.

The car was found 25 yards from the boat ramp and was submersed to the roof, which was barely visible above the waterline, according to Lt. Brandon Kutner, sheriff’s office spokesman. Kutner would not say what items were found in the car, but said the deputies did find at least one window open.

Two other members of the dive team responded to help with the recovery of the body and removal of the car from the lake, which was pulled to shore by Elite Towing of Gainesville.

Authorities are investigating the circumstances surrounding Costantino’s death. The body was turned over to the medical examiner for an autopsy, which should be completed by Tuesday or Wednesday, according to Kutner.

“Our detectives and our forensics units will be working on determining the cause of death,” said Kutner. “At this point, we don’t believe that there’s any foul play involved. However, it is an active open death investigation and the circumstances of the death are still undetermined at this time.”

Original story: A body was found in a submerged vehicle in Melrose this morning.

Shortly before 7:30 a.m., Alachua County Sheriff’s Office deputies were called to the Trout Street boat ramp after a report of a vehicle that appeared to be submerged in the lake.

Members of ACSO’s Marine Operations and Underwater Recovery Team (MOURT) were some of the first to respond.

An ACSO diver confirmed the discovery of a body inside the submerged vehicle. Detectives from the Criminal Investigations Division as well as Crime Scene Investigators from the Forensics Unit are on scene at this time.

Previous Father: Accused Face-Biter’s Organs Are Malfunctioning
Next New Case of Zika Through a Local Mosquito in Florida County