Gainesville may revamp its city code for the first time in decades to stomp out old, archaic and possibly discriminatory language.

The city commission voted on several items in the 2017 general fund last week and the most controversial of the proposals was whether to allocate $10,000 to have a third party clean up the language in old city ordinances.

“They could be things that we no longer find appropriate for city government to be doing today,” Poe said. “One example was that the city is empowered to collect and quarantine populations of our city if we deem it appropriate.”

He said the city’s staff does this internally to a certain extent on a “somewhat regular” basis.

“It’s really to look at our code in a holistic and comprehensive fashion from an outside third party that will make suggestions about anything that is not only discriminatory but also archaic and noncompliant,” Poe said.

Commissioner Harvey Budd said he believed there were better ways to spend the money and help people, as he suggested the proposal was a campaign promise.

“I think it’s a complete waste of money,” Budd said.

But the mayor said the price for the review is high only if the city spends copious time consulting with attorneys from Municode, the third-party organization that would be conducting the review, at their $150 per hour rate, which the mayor stressed is unlikely.

Commissioner Craig Carter said he thought there was merit to the idea but that it wasn’t a good use of funding, adding that such a concept is low on his list of priorities.

Kurt Lannon, clerk of the commission, said he’s already looked at some sections of the code.

“There’s some stuff in there — particularly stuff that comes from the 1960s — that our code is based on that probably need (to change),” Lannon said.

Commissioner Charles Goston said he backs the measure with full-throated support. If the city commission can’t agree that there’s likely discriminatory language in the code, he said he would go to the law school himself and find a student to pour over it with him.

Commissioner Todd Chase, along with Budd, voiced opposition to the measure and said, “We’re just giving money away now.”

The mayor said he never intended a measure he considered minor and relatively inexpensive to spark so much controversy. He suggested the label of “discriminatory language” might have obfuscated the intentions of the review.

“This is so critically important to us,” Poe said. “Our code goes back decades and decades and decades, and there are vestigial elements in our code that have no place in being there and prevent us from doing things as a city that we can all be proud of.”

He said there’s no reason not to at least have an unbiased third party to lay out the issues to see if the commission can address those and improve the city.

Commissioners debated whether the code could be cleaned up internally at a cheaper price. However, Poe pushed the discussion to emphasize the neutrality in which only an outside party could operate.

“When we talk about issues of institutionalized flaws in our government, if that very institution is the one doing the review, there is automatically a lack of credibility,” Poe said, adding the $10,000 price tag was a one-time cost and “one of the smallest increments we have in our budget.”

Torey Alston, the city’s equal opportunity director, said the commission will move forward with a “parallel-track process” in which both an outside party will conduct a review as well as city officials, including himself and the city attorney, who will conduct a simultaneous internal review.

Alston said the goal is to rid the code of direct and indirect barriers that might exist along with a “comprehensive, technical cleanup of the entire code of ordinances with an eye towards equality, equity and inclusion.”

Poe says they’ve tentatively adopted the budget with the $10,000 for the code makeover, but it will not be finalized until a first and second reading of the ordinances happens in September. 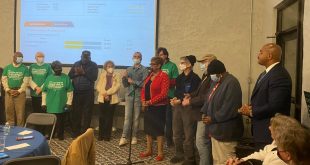