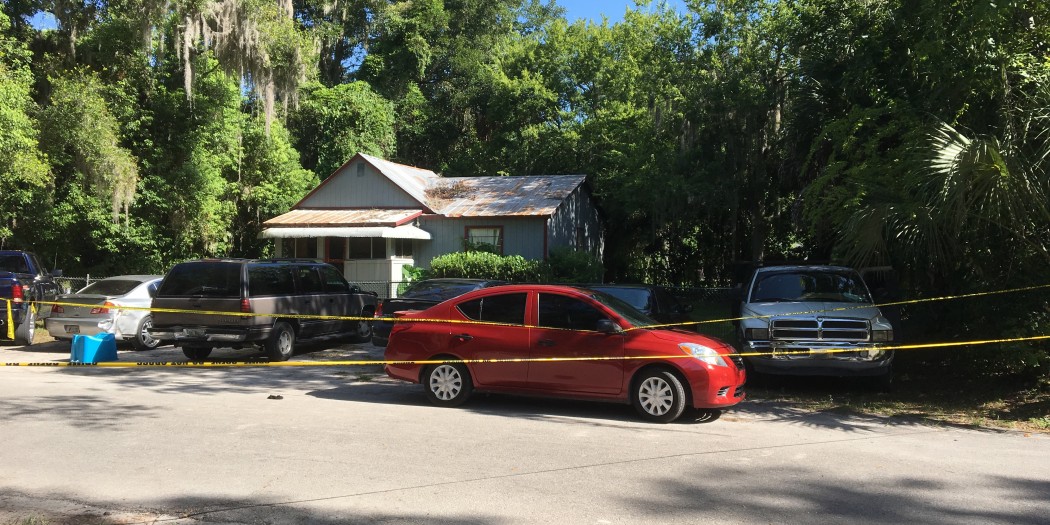 Crime tape sets off the scene of a shooting that claimed the life of 35-year-old Antonio Mason late Wednesday night. Gainesville Police said Mason's 11-month-old daughter, who was in his arms, and a 21-year-old man were also injured in the shooting that took place at 820 NW Fourth Place. (Ian Cohen/WUFT News)

One Killed, Two Injured, Including An Infant, In Wednesday Night House Shooting

Police say two masked men fatally shot a man and injured two others, including a baby, after they forced their way into a Gainesville home late Wednesday night and began shooting.

Antonio Mason, 35, was holding his 11-month-old daughter inside a house at 820 NW Fourth Place when he was fatally shot in the chest. The infant and a 21-year-old man also in the home were both shot in the arm.

Mason was pronounced dead when Gainesville Police officers arrived at the house around midnight. The infant and the man were taken to a hospital with non-life threatening injuries.

“I can’t imagine what type of person would look at a person that’s holding a child and be able to make the barbaric decision to hold a gun at them and pull the trigger,” GPD spokesman Ben Tobias said. “I just can’t fathom that.”

Tobias said about 20 to 25 people were attending a family gathering at the house when the masked gunmen entered and opened fire, causing “mass chaos.” Tobias said at least two different handguns were used in the shootings.

GPD said it began receiving calls at 11:39 p.m. Wednesday, and a K-9 officer arrived at the house in less than a minute, Tobias said. GPD later responded with police dogs and a helicopter but were unable to locate the shooters.

Tobias said GPD does not believe the shooting was a random act but declined to give further details.

Anyone with information regarding the shooting is asked to contact the Gainesville Police Department Detective Bureau at (352) 393-7670.

“We had a baby shot in our city last night,” Tobias said. “And someone out there knows who these people are.”