The Tuesday night session of the Democratic convention was really three events, each with its own atmosphere and impact, but all contributing to a single theme: The Clintons are back.

The first event was the most consequential. Two names were placed in nomination, those of Bernie Sanders and Hillary Clinton. The traditional roll call ensued, with each delegation proudly proclaiming the singular virtues of its home state — and eventually reporting the tally of delegate votes for each contender.

By the time the roll had passed South Dakota, Clinton had surpassed the 2,383 votes needed to win. This should have surprised no one who has kept any sort of tabs on the primaries and caucuses, which long ago showed she would have more than enough delegates to win the nomination on the first ballot.

This had been the way to bet since Clinton won the Ohio primary resoundingly on March 15. But Sanders’ camp had held out hope that their winning streak in April would sow doubts, and insisted a big upset in California in June would change everything.

Even after Clinton had won California handily, some Sanders fans still hoped her high negatives in polling, her adverse media narratives and the heavy bombardment she got from Republicans would give Democratic delegates pause. They hoped even this past weekend’s release of emails from the Democratic National Committee would finally torpedo her candidacy.

But none of those things happened. Clinton prevailed on Tuesday night with 2,842 votes to 1,865 for Sanders. It was simply not close.

But it was not until absolutely all the states had voted that Vermont was recognized to cast its fond vote for its favorite son and allow him to make a special motion. Sanders, who had already conceded defeat and endorsed his rival, moved to make her nomination by acclamation — the final gracious gesture of the runner-up.

The convention roared its approval, although surely not unanimously. Thereafter, several hundred Sanders delegates walked out, chanting as they went. They rallied in the media tent for a time, staging a silent sit-in. Some had their mouths taped or gagged. They then rallied in the outdoor space around the convention hall.

Some went on to join protesters in nearby Franklin D. Roosevelt Park or on Broad Street, where Black Lives Matter demonstrators had marched for six miles from North Philadelphia to confront police and counterdemonstrators outside the convention perimeter.

Other walkout delegates tried to get back in the hall, only to find their seats had gone to alternate delegates and others.

While the Sanders walkouts were absent, the second phase of the Tuesday night session took over. The convention became a giant testimonial dinner for Hillary Clinton. The stories came from classmates from sixth grade, college chums, U.S. senators, and an impressive array of New Yorkers that included a Sept. 11 survivor and a first responder from that day.

The latter two speakers related how Clinton had championed their cause immediately and for years after the 2001 terrorist attacks. One of them, New York police detective Joe Sweeney, was especially effective — first in a video and then in person. Several other witnesses spoke of her commitment to health care as well as health care policy.

More than a few commentators noted that, while these salutes were formulaic in a sense, all included human anecdotes — concrete and specific examples of just how Clinton had helped and how she had maintained consistent contact over the years. That was an element often noted as missing in the corresponding talk of Donald Trump’s caring and generosity at the Republican convention in Cleveland last week.

While the accolades from such party luminaries as Sen. Chuck Schumer of New York and Sen. Barbara Boxer of California, former Gov. Howard Dean of Vermont and former Secretary of State Madeleine Albright were significant and welcome in their own way, Clinton clearly stood to benefit more from the stories of real people.

Among these were the stories told by a panel of mothers, all of whom had lost sons to gun violence, who said Clinton “will say our children’s names.”

Then the gears shifted into the session’s third and final phase. The Clinton forces deployed their big gun, former President Bill Clinton, wheeling him into place to deliver the final testimonial.

The former chief executive leaned into his assignment. He meandered at times, reminiscing about himself and his wife as law students, young professionals, activists and parents. But he returned to his script before concluding his remarks.

He said his wife was the “greatest change maker” he had ever known. And he told delegates she would stand by them because “she always stood by me.”

At the end he contrasted the “real” woman he knows and the “cartoon” version of her drawn by critics at the Republicans’ convention last week. He congratulated the Democratic delegates on choosing “the real one,” and rejecting the cartoon caricature.

Even in his lengthy departures from script, Clinton showed much of the charm and magnetism that had made his speeches memorable in the 1990s — and again in his introduction of President Obama at the convention that re-nominated him in Charlotte in 2012.

At the finish, Clinton said choosing the “real one” would mean voters would be blessed by their children and grandchildren. The words came almost as a benediction for the session.

Yet there followed a coda composed of a video presentation of singer Rachel Platten’s 2015 hit “Fight Song” as performed by more than a score of singers, actors and other famous supporters of Clinton. Then the legendary actress Meryl Streep presented an emotional video of heroic women, which was followed by a rapid-fire catalog of pictures of all 44 presidents — including President Obama, who will address the convention on Wednesday night.

At the conclusion of this portrait parade, a live video of Hillary Clinton appeared via satellite on the huge screen above the stage. Clinton smiled, then greeted and thanked the hall, saying “that glass ceiling” had “one more big crack in it.”

She also addressed a potential future candidate for the presidency, saying: “If there are any little girls out there watching … you’re next.” 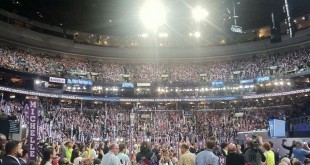 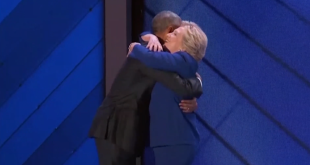