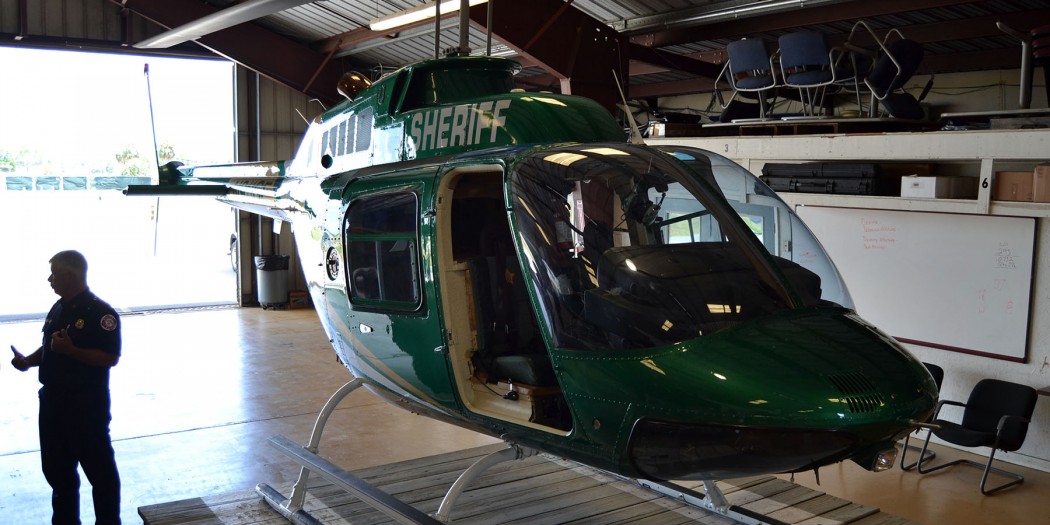 In addition to using the newly acquired 2001 Bell 206B3 helicopter for usual law enforcement missions, the sheriff’s helicopter can carry a Bambi Bucket, which is used to carry water to control and extinguish fires.

The last time that Marion County had a helicopter with the ability to carry the bucket was in the late 1990s, said Lieutenant Joe Standridge, the commander for Marion County’s aviation unit.

The helicopter is a helpful tool to better locate fires from the air, Fire Rescue Capt. Joe Amigliore said. A pilot who is knowledgeable about Marion County Fire Rescue’s fire ground operations and tactics can communicate effectively with fire rescue to fight fires.

The bucket, too, will help more effectively fight fires, by allowing the pilot to douse areas to slow down or control blazes or to drench houses that are in danger of catching fire.

“With the air operation assistance now, they can get on scene,” Amigliore said . “They can spot the fire. We can also hook up that bucket … and stop it there before it turns into that 500-acre fire.”

The helicopter and bucket not only assists in fighting fires, but it also helps decrease damages caused by fires.

The helicopter cost the Marion County Sheriff’s Office about $3,000. Normally, the same helicopter would cost hundreds of thousands of dollars. The Defense Logistics Agency’s Law Enforcement Support Office transferred it for far less.

The helicopter was purchased through the congressionally-authorized 1033 program, which sells surplus equipment that the military has no use for and transfers the equipment to federal and state agencies. The sheriff’s office already owned a Bambi Bucket.

“With the economy the way it is, this seemed to be the smart stopgap measure for us to be able to pick up something a little newer and operate for a few years until the budget, hopefully, becomes flush again, and we are able to replace it,” Standridge said.

The military notifies the Defense Logistics Agency that it has surplus equipment, which can range from clothing, sunglasses, weapons, or helicopters. Federal, state, and local agencies then have the opportunity to acquire whatever equipment they need once accepted into the program, agency spokeswoman Michelle McCaskill said.

Following maintenance and a new coat of paint, Standridge said the helicopter is now ready for use.

Patricia is a reporter for WUFT News. She can be reached at news@wuft.org or 352-392-6397.
Previous Florida Democratic Delegates Struggling To Unite
Next Traffic Up To Speed After Burning Semi Truck Shuts Down I-75 Northbound