Sister Hazel Helped You In The Streets, In The Home, And In Prison

Dr. Hazel K. Williams died earlier this month at the age of 91. On Sunday, dozens attended a service in her honor before her body was buried at Evergreen Cemetery. These are the words of some of her friends and associates. 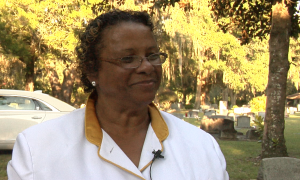 You knew her for quite some time?

Most definitely. We go way back. Over 30 years. When I first met her, it was at a home when she was doing a revival. From that house, she came to mine. She said the Lord wanted her to come to my house. After that, God just blessed and we have a long history together. I just love what she’d do and what she stood for, and it made so much difference in the lives of so many people. My family, as well. My husband came back to the Lord, rededicated his life as a result of her coming to our home and doing a home revival all week long.

What did she stand for in Gainesville?

I believe she was a beacon of light for many through the love and compassion that she showed. A lot of people do not read the Bible, but we are living epistles and I do believe that she demonstrated the love of God for all mankind. It didn’t matter about the color, background or where you’re from, as long as you were a soul. Souls matter to her, and all souls belong to God. She may not have seen some lives change while she was living, but I do believe that this will continue on and have that triple effect that so many of us are talking about. I believe that many souls have come into the kingdom of God as a result of who she stood for and to express love. That’s what it was all about.

What was your takeaway from the service today?

She was a servant to people who sometimes we don’t think about or maybe don’t have enough time for. She never gave up. She never gave up. That’s why we need to reach out and accept every opportunity that God gives us daily. Especially at a time like this — the world needs love. The world needs Jesus… Even toward the end, she was full of the word and every time we’d get on the phone, she’d share with me a message and a new revelation she’d gotten from the world. She said, “Ruby, the Lord and I are closer now than ever before.”

Why did you name the ban 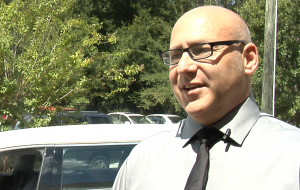 It’s an important time in a young band’s life when you choose a name, and I knew that I wanted something that represented unconditional regard for everybody and everything. Growing up in Gainesville, I had seen the work she had done, and she represented that to me. Unconditional regard for everybody regardless of race, religion or orientation — anything. She would give you a safe, warm place to dust off and regroup if you needed it. We adopted that name and hope we’ve been making her proud ever since.

What impact do you feel she had on Gainesville?

She was like a little general. She was feisty, but she was friendly and she was fair. She was a very powerful speaker — very inspirational and motivational, not just with her words but with her actions. She was a spiritual powerhouse. She impacted people in ways and got them doing things and made people feel loved, that they mattered at the lowest times of their life. By watching that every single day, she really inspired people in deep, deep ways.

What’s the overall message as we remember her?

Sister Hazel’s life was about joy, about being a voice for the voiceless and hope for the hopeless. Her people were the street people. Her people were anyone who reached out for help. Everyone was a child of God in her eyes, no matter what walk of life they came from, no matter how educated they were, money they had, money they didn’t have. Her blurring of those lines, especially at a time in society when things are so divisive, was just a joy to watch.

What was your relationship with her?

She and I have known each other for a long, long time. She and I met shortly after we started using that name, and she gave us our blessing as long as we kept our noses  clean — which, for the most part, we did. She wanted to make sure we weren’t out there preaching hate, and we’re lucky to call attention to a lot of worthy causes in our 22 years as a band now and also help her out. 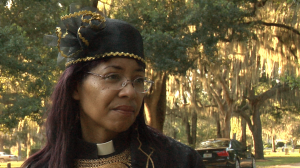 How did you meet her?

What kind of impact did she have on you?

Like her, I’m called to work with those who are less fortunate. I’ve been working with the female inmates for over 16 years now, and at Lowell since 2002. She reminded me of Mother Theresa in the way that she loved those who needed help. With me, I know passing by her house just now I was just torn up because it didn’t really impact me that she’s gone until we passed by her house.

Danielle is a reporter for WUFT News and can be contacted by calling 352-392-6397 or emailing news@wuft.org.
Previous Authorities: 2 killed, More Than a Dozen Shot at Fort Myers Nightclub
Next College Dream Almost Delayed For Hernando 15-Year-Old After Grading Hang-up