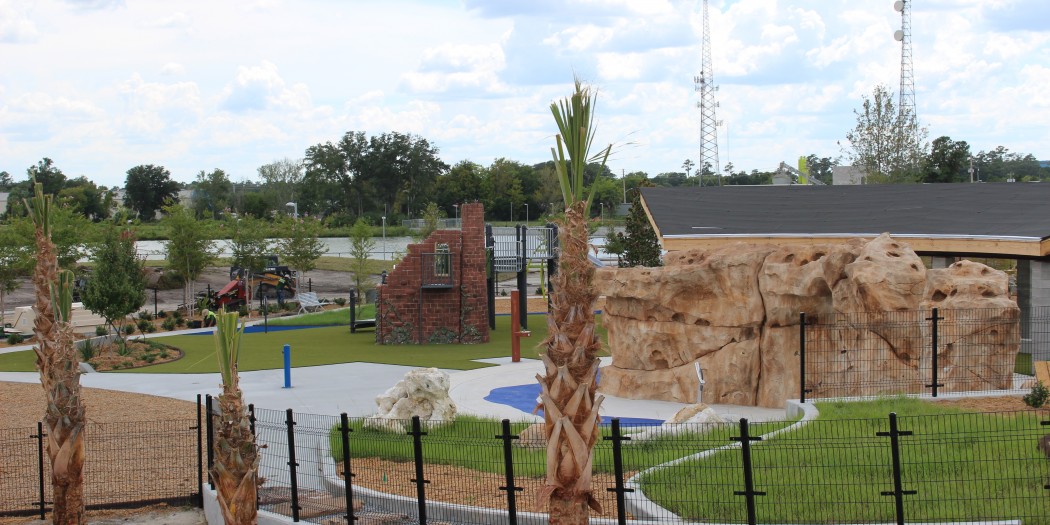 Gainesville children will soon have a new industrial-themed park where they can play while they learn about the local environment and history.

Depot Park, which features a 50-foot customized train playground with a 14-foot-tall smokestack, is expected to attract adventure-seeking kids from more than just the Gainesville area.

Cindi Harvey, the park’s lead project manager, said Depot Park is designed to teach children about invasive species and fossils, as well as the people who inhabited the area many years ago.

Educating children while they are having fun is one of the park’s main goals.

“Probably the most exciting part of this play feature is the fact that (the) Florida Museum of Natural History, the Florida Paleontological Society and the Florida Geological Foundation all donated fossils to embed in the Blue Grotto,” Harvey said about a water feature that showcases the underwater cavern systems in this area of the state.

Malcom Kiner, a Gainesville Community Redevelopment Agency project manager, said he has tried to increase community engagement through social media. The CRA is hoping to see an increase in community participation by monitoring the role and effect the project has through a Community Vitality Report in 2017.

“We’re really excited about bringing the community out to that special space,” Kiner said.

Gainesville City Commissioner Craig Carter said he loves how the park has incorporated educational details throughout.

“I was really getting excited just thinking that (the park) is going to cause them to think and cause them to ask questions, and that’s exactly what we should do,“ said Carter at Monday’s Community Redevelopment Agency meeting. “And I can’t wait to hear that the other cities are comparing. They’re saying, ‘Look at Gainesville,’ because this is definitely a home run, without a doubt.”

Editor’s note: This story has been updated to accurately reflect that workshops to discuss improvements to South Main Street will be held Aug. 29 and 30. Quotes that were incorrectly attributed to Michael Beard have been revised and attributed to Malcom Kiner, a GCRA project manager.

Previous Pictures: Republican National Convention
Next What Are Those Mysterious Holes On Newberry Road?