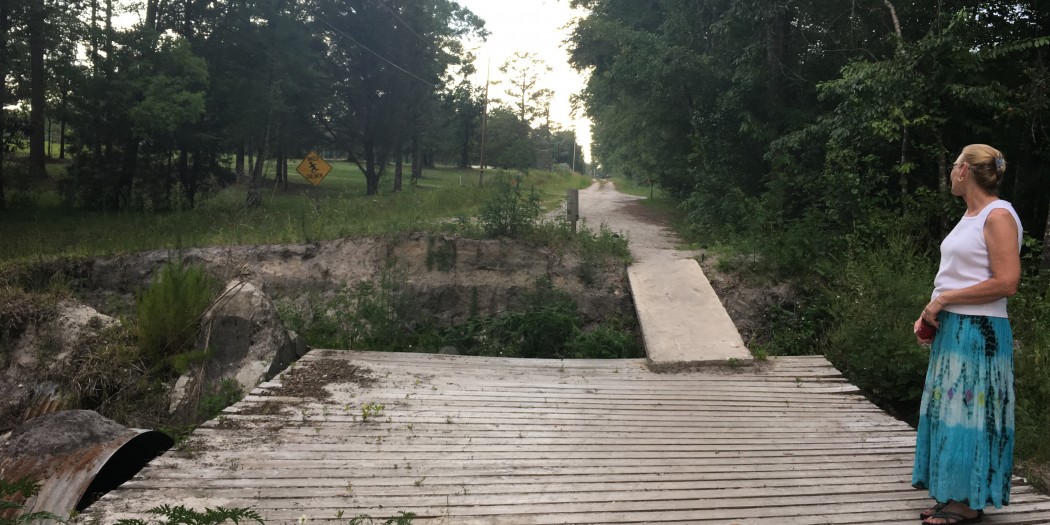 A Northeast 96th Avenue resident looks across the collapsed bridge that leads to her neighborhood. Almost a year since its collapse, area residents wait for a permanent solution. (Photo by Lisandranette Rios/WUFT News)

Is A Bailey Bridge The Solution To This Collapsed Alachua County Creek Crossing?

Almost a year since the bridge on Northeast 96th Avenue in Gainesville collapsed after a storm, area residents are still parking their cars and walking across the collapsed bridge to their homes every day.

Alachua County Commissioner Robert Hutchinson said he is continuing to search for a temporary solution to the problem, namely the use of a Bailey bridge, a type of portable, pre-fabricated, truss bridge used by the military, to allow vehicles to cross the creek.

Hutchinson, who proposed the idea at the May 24 County Commission meeting, said he wrote to Gov. Rick Scott on June 14 thanking him for his offer to help Alachua County residents. In the letter, Hutchinson wrote that an 80-foot Bailey bridge or equivalent military surplus item would be a simple solution. As of last week, the Governor’s office had not responded.

Area residents said they are disheartened by the situation.

Lisa Franklin, who lives on Northeast 96th Avenue, said she was waiting to hear if Hutchinson would meet with someone from Camp Blanding in Starke to find out if there are surplus bridges, and what the cost would be to get one.

Franklin said she has not heard anything since the Alachua County Commissioners meeting in May. While she said she understands the commissioner’s hands are tied, she believes a declaration of an emergency early on would have provided aid from FEMA or a grant to cover the cost of a bridge.

She said the residents are still looking for a solution.

Roxanne Eckles-Macdonald, another Northeast 96th Avenue resident, said everyday activities like bringing in groceries have been made difficult.

“You don’t realize how lucky you are when you have a driveway you can just drive up into,” she said.

But the most difficult part, according to Eckles-Macdonald, is that emergency services cannot reach them.

“If we needed an ambulance, if we needed fire, how would they reach us and in a timely manner?” she said. “Someone could die before they could get to us.”

If there is a Bailey bridge available, the best route is to get the military to transfer the bridge to the Florida National Guard since Gov. Scott could then declare the bridge as surplus, Hutchinson said.

“I think if that happens, we would be able to get some military guys or even ex-military guys to construct that bridge or assemble that bridge,” said Hutchinson, who has been searching the Internet for surplus Bailey bridges. “That’s, hopefully, if not a permanent solution, at least a solution that will last us for many years.”

“It’s not the public’s bridge, and that’s the problem we’re dealing with here,” Hutchinson said. “We’re looking for a public solution, but at the end of the day, we can’t do this for everybody, and we’ll do the best we can.”