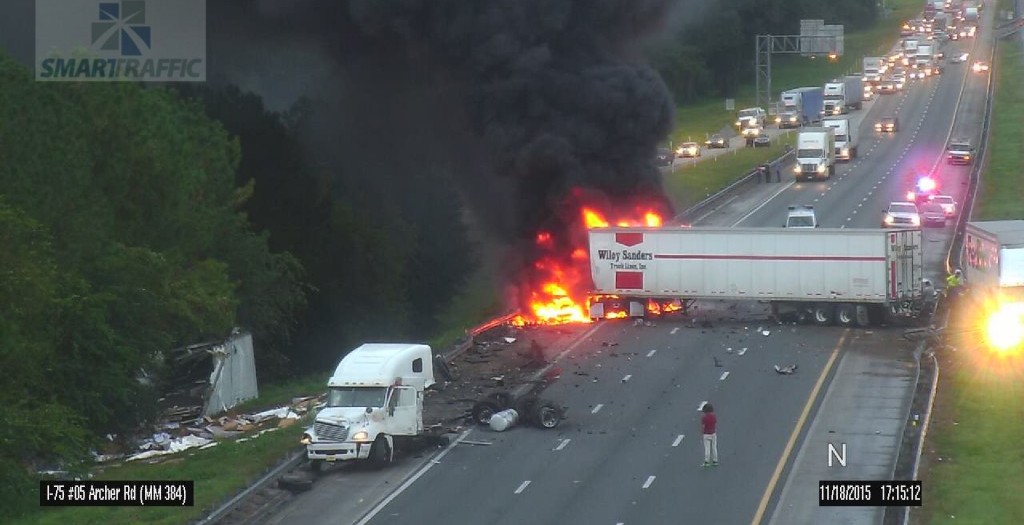 Report: Cause of Fatal November Crash on I-75 Inconclusive

Authorities do not know what caused the Nov. 18 seven-car crash on Interstate 75 that killed one and injured three, according to an April Department of Highway Safety and Motor Vehicles report.

Steven A. Reed, 56, of Dothan, Alabama, was pronounced dead after his semi-tractor trailer veered across three lanes of northbound traffic, plowing through the median by mile marker 384 before sideswiping a yellow semi that was moving south in the right lane, according to the report.

Reed’s vehicle jackknifed and caught fire as it came to a stop blocking all three lanes of southbound traffic.

Terrence S. Reilly, 57, of Ossipee, New Hampshire, was injured when his white Toyota Tacoma slid partially under Reed’s semi. John A. Mingee, 43, of Ocala, was heading south in the right lane when his Chrysler Town and Country van hit the right side of Reed’s vehicle. Both were taken to UF Health Shands Hospital.

Hernando Rincon, 63, of Kissimmee was driving a semi in the right lane when he collided with the left side Reed’s vehicle, causing Rincon’s trailer to become unhitched and sending it into a grass embankment. Ricon sustained minor injuries and was not taken to a hospital, according to the report.

A white Kia Forte hit the left part of Mingee’s van before both vehicles came to rest on the east paved apron. A silver Toyota Tacoma then collided with the back of the Forte before also hitting the rear of Mingee’s van. Drivers and passengers of the Tacoma and Forte were not taken to a hospital.

Reed was a driver for Max Hughes Trucking based in Troy, Alabama. The company’s drivers have been a part of eight crashes involving injuries in the two years before the Nov. 18 collision. Max Hughes Trucking received a satisfactory safety rating in a January 2013 federal compliance review.