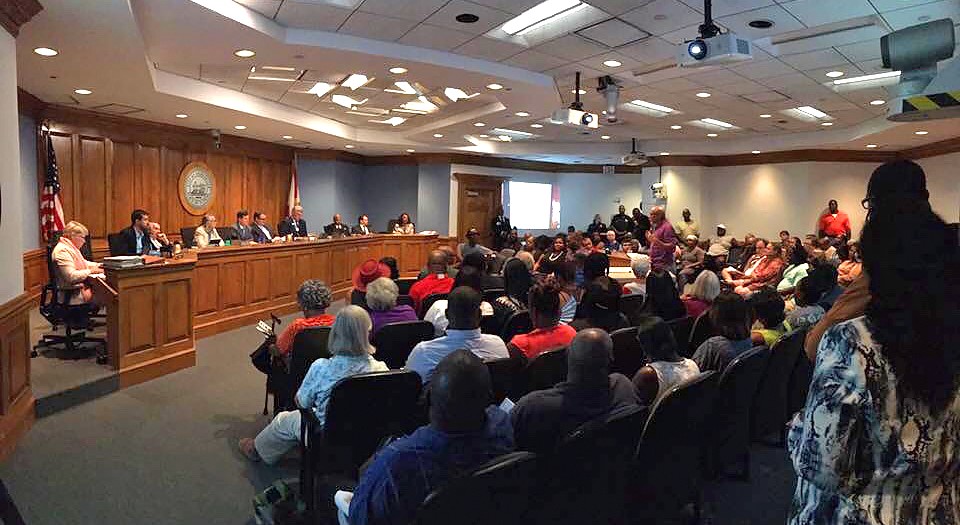 The people of Gainesville filled the chambers of the city commission in support of police chief Tony Jones in response to a letter sent to the city manager questioning the chief's leadership of the department. (Courtesy Harvey Ward)

The people of Gainesville packed city hall last night in support of Gainesville Police Chief Tony Jones after an anonymous letter questioning his leadership was sent to city officials.

The city commissioners, advocates and meeting attendees voiced support for Jones and City Manager Anthony Lyons during the city commission meeting. Not a single person spoke negatively or expressed agreement with the letter.

The commissioners said they support Jones and have no intention of trying to remove him from office.

Major Lauren Poe said it was his proudest day as an elected official.

“You all showed up, some will say out of frustration or fear, but it was none of those things,” said Poe. “It was love. You showed up more importantly out of love for your community.”

The letter, which was unsigned, but included information specific to Jones’ policies and his relationship with officers, stated lack of leadership and officer pay as two major complaints against the chief.

Jones, a Gainesville native, has been the police chief since 2009.

Former Gainesville city commissioner Cynthia Chestnut said Jones is an example of how local youth can work their way up and make something of themselves.

“Each one of you in running for office, you’ve talked about trying to keep young people in our community and you want to work for upward mobility,” Chestnut said. “Well that’s what Tony Jones represents.”

The letter, which was sent to Jones, Gainesville city management, the mayor and media outlets on June 20, also criticizes the chief’s focus on the Reichert House, an after school program for at-risk youth.

Tafanisia Philips, a single mom whose sons went through the Reichert House, pleaded that the city continue to support the program.

“Some police are here because they are honest and good people, and I have met them,” Filer said. “I’d like to meet the others and have a conversation with them too.”

Jones was in attendance but did not speak to the commission or make any public statement.