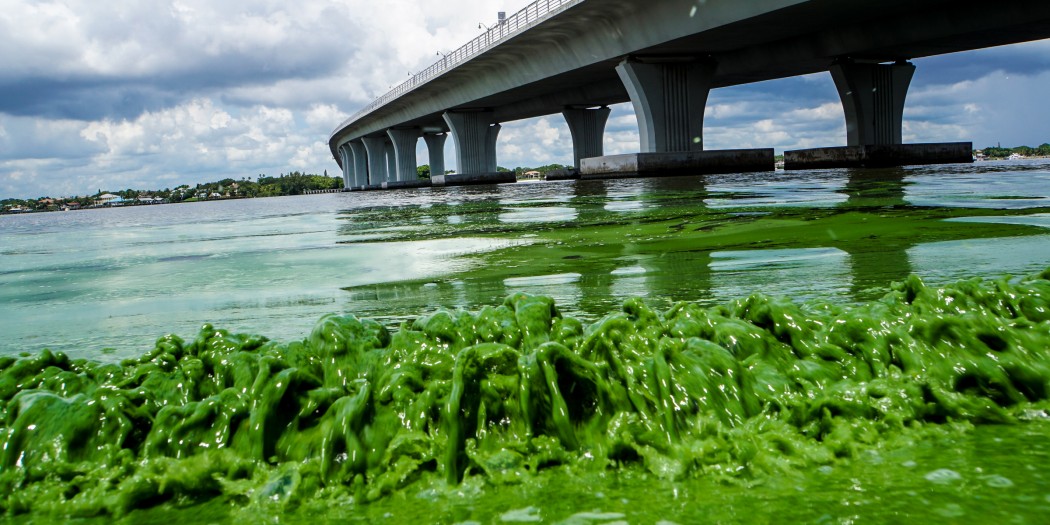 Water full of algae laps along the Sewell's Point shore on the St. Lucie River under an Ocean Boulevard bridge, Monday, June 27, 2016. The Martin County Commission decided at an emergency meeting Tuesday to ask state and federal authorities to declare a disaster where blue-green algae has closed beaches. County officials on Florida's Atlantic coast want the U.S. Army Corps of Engineers to close the locks between Lake Okeechobee and the St. Lucie River. (Richard Graulich/The Palm Beach Post via AP)

Money to reduce the use of septic systems will be in Gov. Rick Scott’s proposed budget for next year, as the state grapples with swirling green algae coating waterways in parts of the Treasure Coast.

However, incoming Senate President Joe Negron, R-Stuart, said that while cleaning runoff and replacing septic tanks will help in the maintenance of area waters, septic systems “are not the culprit” for the current crisis.

Instead, Negron said he is working on a proposal that could use voter-approved environmental money to buy land and shift the flow of water south out of Lake Okeechobee. Nutrient-laden water is now sent into waterways to the east and west when lake levels get too high.

“I appreciate the governor’s announcement, I think it’s a piece of the long-term puzzle,” Negron said. “But make no mistake about it, this algae bloom is not caused by septic tanks. It’s not caused by runoff. It’s caused by massive releases from Lake Okeechobee.”

The governor, in his announcement on Wednesday, said he is working on a recommendation for the 2017-2018 budget to help in the cleanup of the Indian River Lagoon and the Caloosahatchee River, which have been described on cable news and by state, national and international media as containing “guacamole-thick” muck that is “smelly,” “reeking” and “oozing.”

Scott, who continued to blame the federal government for not completing repairs to the Herbert Hoover Dike surrounding the lake, wants to create a voluntary program that would encourage residents on septic systems to connect to sewer systems to “curb pollution that is currently entering into these water bodies.”

“Septic tank runoff is a major contributor to the pollution in these water bodies, and I look forward to working with the Legislature to fund efforts to curb it,” Scott said in a prepared statement Wednesday.

The proposal would require legislative approval. It also would require a 50-50 local government match for money to become available for construction of wastewater systems or to help property owners shift to sewers.

By making the replacement program voluntary, Scott is avoiding the type of controversy that arose when a 2010 law required property owners to pay for inspections on 2.6 million septic tanks in the state every five years. That law was repealed two years laterunder Scott.

Scott’s proposal, which is being crafted with help from the Florida Department of Environmental Protection and the South Florida Water Management District, comes amid renewed calls to acquire sugar-industry land to allow water to be sent south from Lake Okeechobee.

On Wednesday, U.S. Sen. Bill Nelson, an Orlando Democrat who toured the St. Lucie River last week, pointed to the state’s failure to acquire sugar-industry land as a reason U.S. Senate leaders must take up this year’s federal water bill.

“Since the state refuses to acquire additional land south of the lake to help store and treat this water before sending it south — as Mother Nature intended — it’s imperative that Congress act now to help solve the problem,” Nelson wrote in a letter to Senate Majority Leader Mitch McConnell, R-Ky., and Minority Leader Harry Reid, D-Nev.

The federal water bill would allow the U.S. Army Corps of Engineers to advance the Central Everglades Planning Project, which would send more water south.

Following an emergency declaration last week by Scott for Martin, St. Lucie, Palm Beach and Lee counties, the U.S. Army Corps, which manages the water levels of Lake Okeechobee, reduced the amount of water being released daily into the Caloosahatchee and St. Lucie estuaries.

Negron, who is slated to become Senate president after the November elections, said he intends to focus during the 2017 session on finding places to “clean, send and store water” as an alternative to U.S. Army Corps releases to the east and west. Keeping the lake from exceeding a 14-foot depth is considered necessary for the integrity of the dike system.

“I think we need to buy land south of the lake,” said Negron. “Where it should be and the manner of getting the water to that land, that’s what I’m gathering information on from scientists and experts in the area.”

Negron, who intends to pitch his proposal “shortly,” said he hasn’t ruled out 46,800 acres of land in the Everglades owned by U.S. Sugar Corp. The South Florida Water Management District Governing Board declined to pursue the land in May 2015. But he also isn’t focused strictly on that land.

“There are many large, private land owners south of the lake, not just the two large sugar companies,” Negron said. “We want to make sure that land we do purchase accomplishes its goal, which is to have a place, in the very short term, where water can go.”

Among the things Negron is looking at is the cost of any land purchase.

Negron was able to secure $231.9 million in 2014 for a number of South Florida water projects. That money came after the St. Lucie River estuary the prior year was inundated with nutrient-heavy waters released from Lake Okeechobee.

Last year he was behind legislation, known as Legacy Florida, which sets aside up to $200 million a year for the Everglades, $50 million annually for the state’s natural springs and $5 million each year for Lake Apopka from money voters designated in 2014 to manage and preserve state lands and waters.

Last week, as widespread algae blooms caused beaches to be closed in Martin County in advance of the July 4 holiday weekend, Scott issued a state of emergency that allows the Department of Environmental Protection and the Florida Fish and Wildlife Conservation Commission to sidestep state law to take actions needed to reduce the spread of the blooms in the St. Lucie and Caloosahatchee estuaries.

Scott’s order also allows the South Florida Water Management District to reduce the flow of water into Lake Okeechobee through additional water storage projects and calls on the federal government to approve permits for the state’s dispersed water management programs.