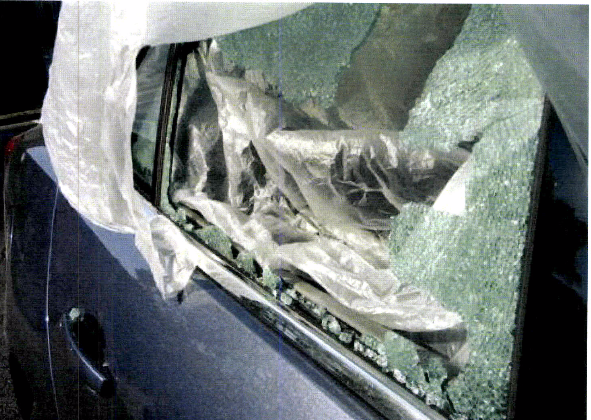 The window of a car parked in the Majestic Oaks apartment complex was shattered in the Robert Dentmond shooting when ASO and GPD officers killed the Gainesville teen who was holding a replica of an AR-15 rifle.

The Alachua County Sheriff’s Office has paid out thousands of dollars for damages for the March 20 shooting of Gainesville teenager Robert Dentmond.

In total, the sheriff’s office has paid out about $14,000 in claims to six people whose property was damaged at Majestic Oaks Apartments when Dentmond was shot. A seventh claim is to be paid out at a later date, after an appraisal from an insurance company, according to records provided by the sheriff’s office.

However, not all residents believe they have been properly compensated.

“We didn’t get anything,” said Shirley Johnson, who has lived at the complex since January.

She and her daughter, Trenesha McQueen, were in their apartment the night of the shooting. Johnson said that although sheriff’s deputies and Florida Department of Law Enforcement investigators came to her apartment that evening to assess the damages, bullet holes remain in the walls and furniture almost four months later without any compensation.

McQueen, 19, said she was lying down in her bedroom during the shooting. A bullet hole – one of three on the same wall – can be seen about three feet above the head of her bed.

“It’s really hard to sleep,” she said. “I wake up screaming and yelling and crying. I can’t sleep at night.”

Alachua County Sheriff’s Office spokesman,  Lt. Brandon Kutner, said all reported claims have been documented by a sheriff’s office supervisor and paid out – aside from the one waiting on an appraisal, which isn’t McQueen’s.

Linda Brown, the sheriff’s office’s records bureau chief, confirmed in an email that no records show money being paid out to Majestic Oaks for damages to the apartments.

Nine deputies and officers shot a barrage of bullets at Dentmond after the teen refused to drop his weapon and continued to walk toward an occupied building. Law enforcement later determined the gun was a replica of a semi-automatic AR-15 assault rifle.

After the shooting, damage to six cars as well as items in one Majestic Oaks Apartments unit was reported by residents of the complex, according to sheriff’s office documents obtained through a public records request. Claims on vehicle damage ranged from just over $1,500 for one 2005 Buick to about $3,400 for a 1996 Toyota.

A television set and couch in an apartment near where Dentmond was standing were damaged in the shooting. For that damage, one person was paid $615.

Information on the number of rounds fired at Dentmond will be released when the Florida Department of Law Enforcement concludes its investigation and once the investigation is reviewed by the state attorney’s office. Audio of the shooting captures a span of about 10 seconds during which gun shots can be heard.

Sixteen-year-old Dentmond had sent Facebook messages to his girlfriend that suggested he was intent on committing suicide by cop, according to a June 2 joint press release by the sheriff’s office and the Gainesville Police Department.

Since 2011, the Florida Sheriffs Self Insurance Program (FSSIP) — the liability insurance for the state’s sheriffs — has paid out more than $300,000 in claims from Alachua County, not including any money for Dentmond, according to records from the sheriff’s office.