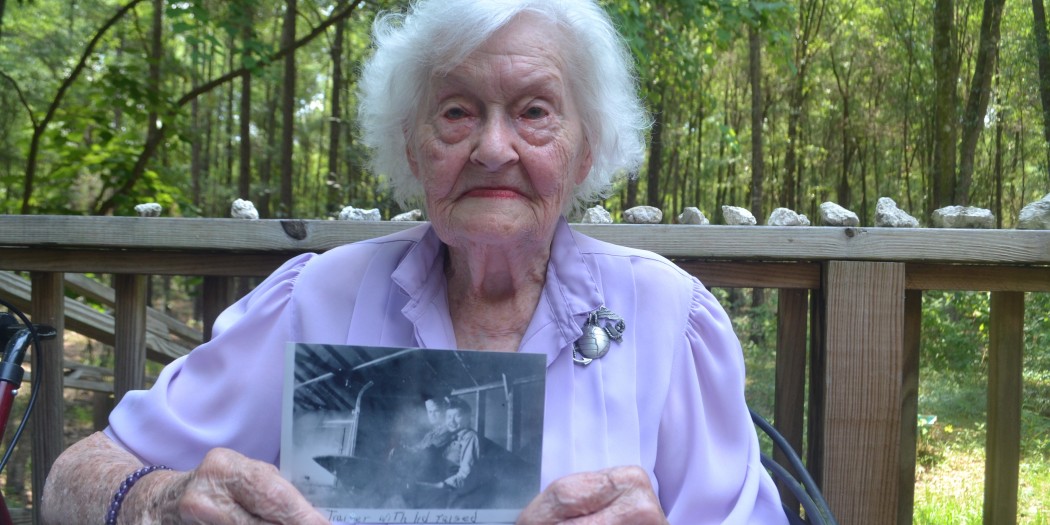 June Whitehurst, wearing her silver U.S. Marines insignia pin, talks about her service as one of the nation’s first enlisted women Marines on active duty during World War II. She started working on her scrapbook in the early 1940s and has preserved handwritten letters, wartime documents and photos in its aged pages. (Brittany Valencic/WUFT News)

As Debate On Women In The Military Goes On, High Springs Woman Recalls Service As U.S. Marine

June Whitehurst flips through the creased, leather-bound scrapbook she started over seven decades ago. Its pages preserve handwritten letters on yellowed stationary and faded black and white photographs of patriotic trailblazing.

Whitehurst, now 93, was one of the first women to join the U.S. Marines Corps in 1943 – and among the first to be placed on active duty — in World War II.

“I was listening to Arthur Godfrey’s show on the radio (in the 1940s), and I hear him say that the Marine Corps has just opened its doors to women. And I can remember saying out loud, ‘Oh, that’s for me,” she said.

Her reminiscing comes as U.S. lawmakers continue the debate over the role of women in the military. Congress this week is embroiled in an intense fight over whether women should have to register for the draft when they turn 18.

For Whitehurst, whose mother was a U.S. Army nurse and whose father was an Army sergeant in World War I, the call to service came as no surprise.

“It was in my blood,” she said. “I had a good life, but I wanted some more action…and joining the Marines just seemed to suit it.”

At the time, women had been able to enlist in the other branches of the military, just not the Marines. But with the surge and need for additional manpower during World War II, the country looked to new sources of personnel to staff its military.

“At a time of great need, women volunteered in significant numbers to ‘Free a Marine to Fight,’ in the case of the Marine Corps, which was the very popular motto at the time,” said Lin Ezell, the director of the National Museum of the Marine Corps in Virginia. “These women were able to make an immediate difference.”

So in 1943, on her 20th birthday, the day she met the age requirement to join, Whitehurst enlisted in the U.S. Marines.

“I couldn’t wait,” she said at her five-acre home in High Springs where a “Marine Parking Only” sign hangs in her yard.

Whitehurst, along with two other women, were immediately appointed to Pentagon positions due to existing security clearances and were on active duty in Washington D.C. before the women Marines had conducted their first boot camp.

As one of the pioneers working at headquarters, she was privileged to information regarding getting the women’s branch started, she said. She played a role in decisions like choosing the summer uniforms and keeping the name of the women’s Marines acronym-free, something she believed would weaken their elite status.

“June was one of the firsts, and she took on every challenge,” said Nancy Wilt,  the current historian for the Women Marines Association and a Marine veteran who served for 12 years. “She was going to be the best Marine she could be, and she marched to that order.”

After boot camp at Hunter College in New York City, Whitehurst said she chose to be a Link Trainer instructor — a job that required her to teach pilots instrument flight, an integral part of flying, and one of the toughest tasks to take on.

“Challenges are something I think people should never be afraid of,” said Whitehurst, who has flown a plane but never cared to learn to drive a car. “If there is a challenge, go ahead and accept it and do it.”

She spent the next year and a half at Atlantic Field, a major base in North Carolina, where she eventually met her husband. She left the Marines with the rank of sergeant when she became pregnant in 1945 .

Ezell said Whitehurst’s role in Marine aviation was very technically challenging and labor-intensive and spoke to her confidence as a Marine. She wasn’t a wallflower, she said.

As of 2012, women make up about 7 percent of the Marines, but women like Whitehurst paved the way and showed the nation they could do anything they put their minds to, according to Annette Amerman, the branch head and historian for the Historical Inquiries and Research Branch of the U.S. Marine Corps History Division.

Whitehurst has also been able to recreate a vivid picture of World War II, which is rare these days, said Wilt, who has become a close friend to Whitehurst. “I think she is a national treasure.”

“There is nothing I would change or do differently,” she said. “I haven’t had the perfect life, but it sure has been great for me.”

Hundreds of cars lined the parking lot of the Oaks Mall Thursday morning, waiting for …