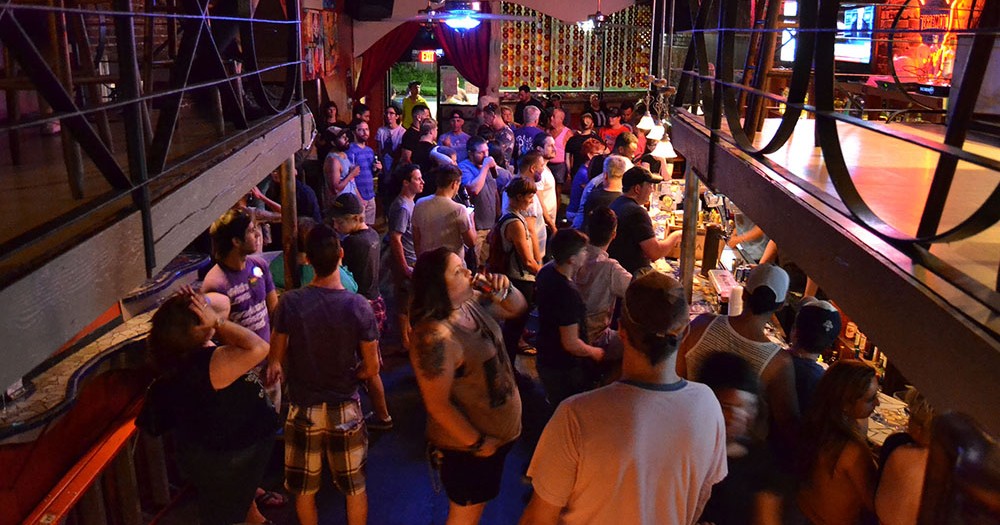 After the march, attendees head over to University Club, a gay club, to further commemorate the lives lost during the Orlando shooting with a champagne toast. (Patricia Ochoa/WUFT News)

The last time Arlo Bryant and his friends went to Pulse night club, they said they had a good time. Bryant said he and his friends had planned to return to Pulse Saturday night but decided against it at the last minute.

Bryant could never have imagined that one of the worst mass shootings in American history would ensue at the club. At around 2 a.m. Sunday, police say, 29-year-old Omar Mateen entered the Pulse club, a gay venue, with a rifle and pistol and opened fire killing 49 people and injuring 53.

“I don’t know that they could have done anything differently, but I do know I would have been scared and I would have prayed in that moment,” Bryant said.

Gainesville residents gathered Monday night at University Club, a popular downtown spot for the gay community, to pay their respects to the victims of the Pulse shooting. In the 27 years since its opening, University Club, which draws a diverse crowd, has had no major major fights, club officials said.

“Everybody knows what the rules are before coming into the club,” said Lou Malott, a security guard at University Club.

Even when there are disagreements, they are stopped without issue, said Malott. Nonetheless, University Club owner, Mark Spangler, said he wants security to remain vigilant in the wake of the Pulse shooting.

“We’re going to start telling people where the exits are, and get people familiar with them,” said Spangler.

He said he believes if patrons know where to exit, it could help if there were ever an incident similar to that of the Pulse shooting.

“I will be more cautious when I go out, but I will not let this shooting scare me away from living my life,” said Bryant.

The American Psychological Association recommends people make use of community resources to help them cope with the aftermath of the shooting.

The Alachua County Crisis Center and the Counseling and Wellness Center at the University of Florida are among the resources those affected can use.