Monday at 6:46 a.m.: About 100 people marched Sunday night from the Ayers Medical Plaza to the Bo Diddley Plaza in Gainesville: 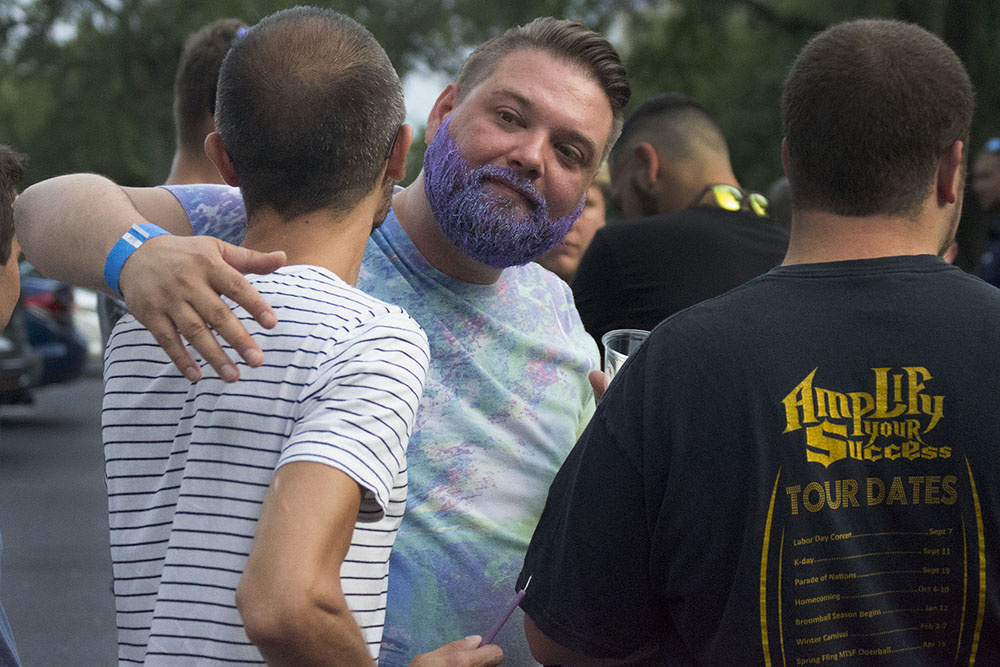 Scott Purcell, center, hugs a friend during the March for Lives Lost candlelight vigil. Purcell, 36, organized the march that honored the lives of those killed in Orlando Sunday. (Patricia Ochoa/WUFT News) 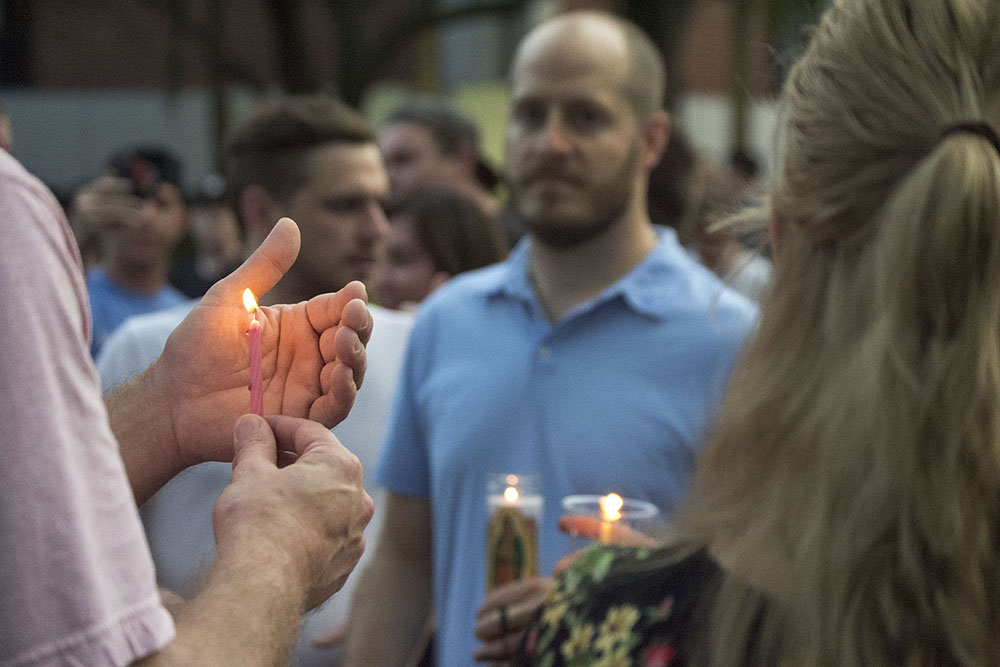 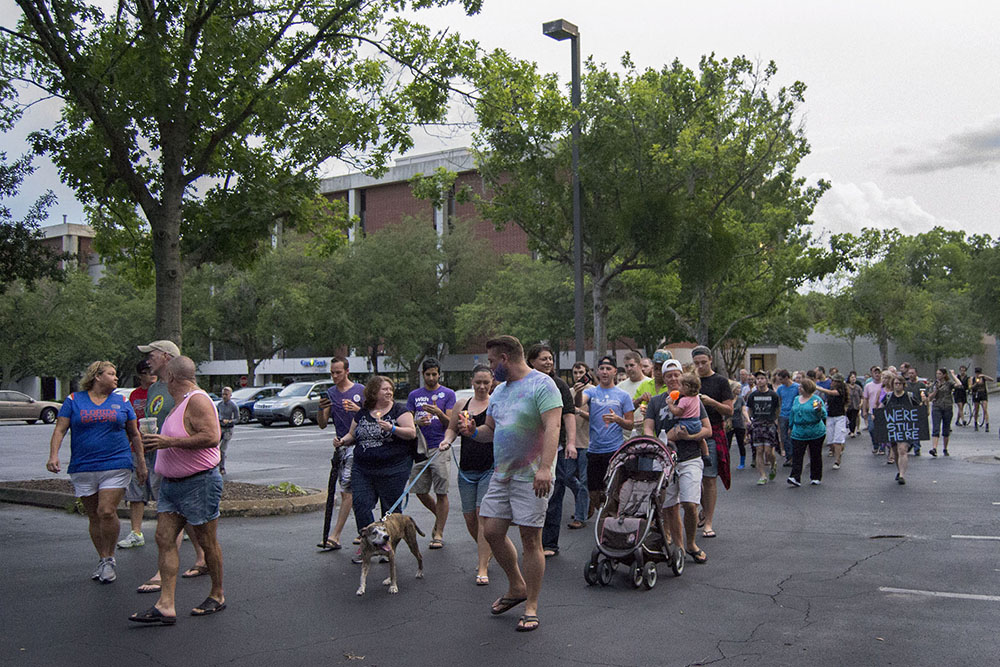 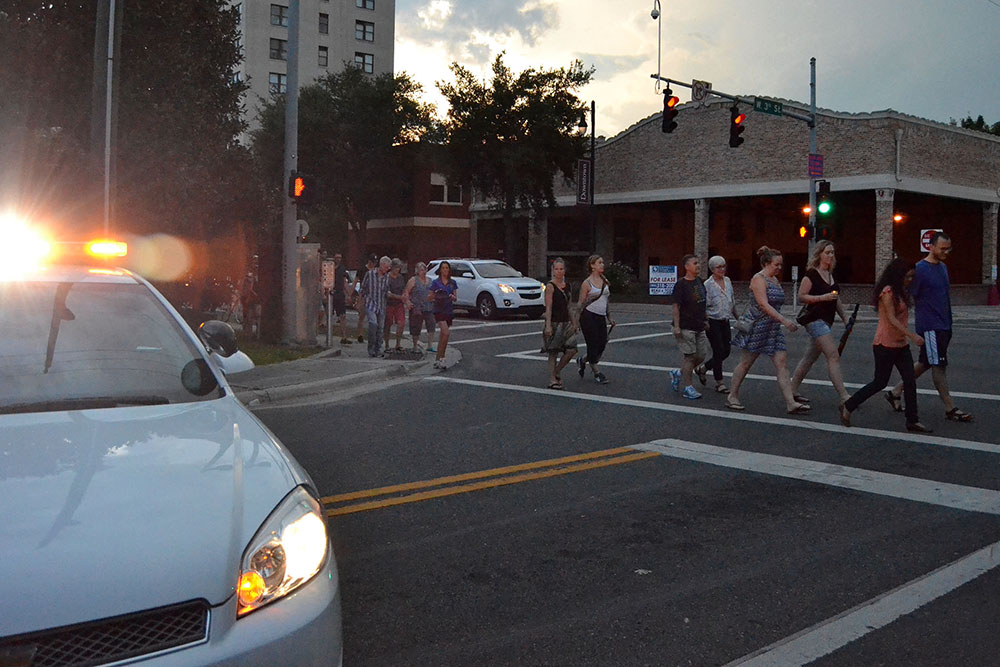 Local authorities temporarily stop cars to allow the March for Lives Lost to march safely and without any hindrance. (Patricia Ochoa/WUFT News) 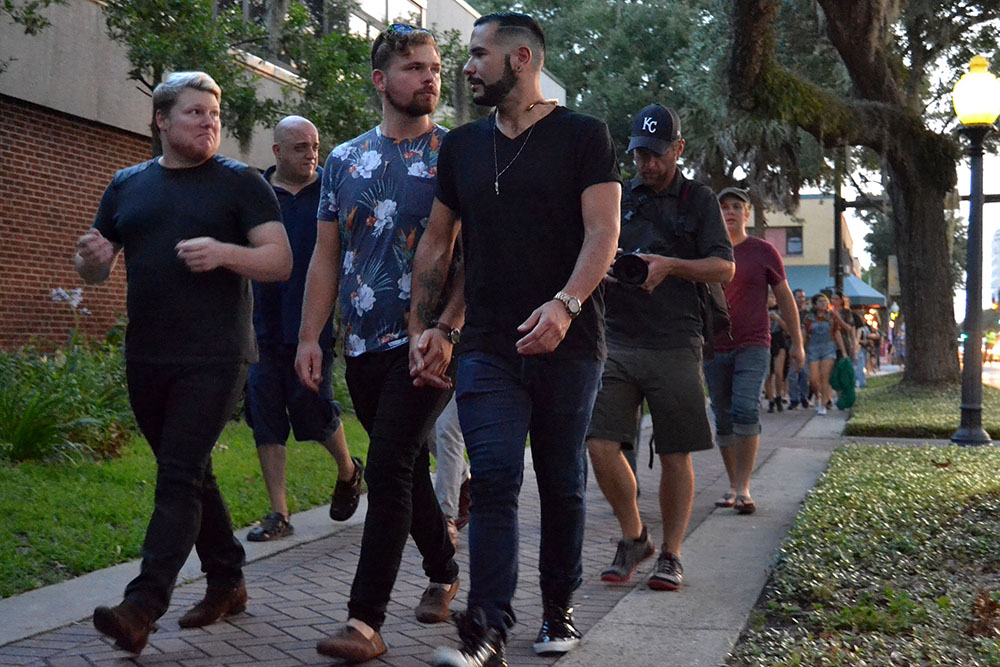 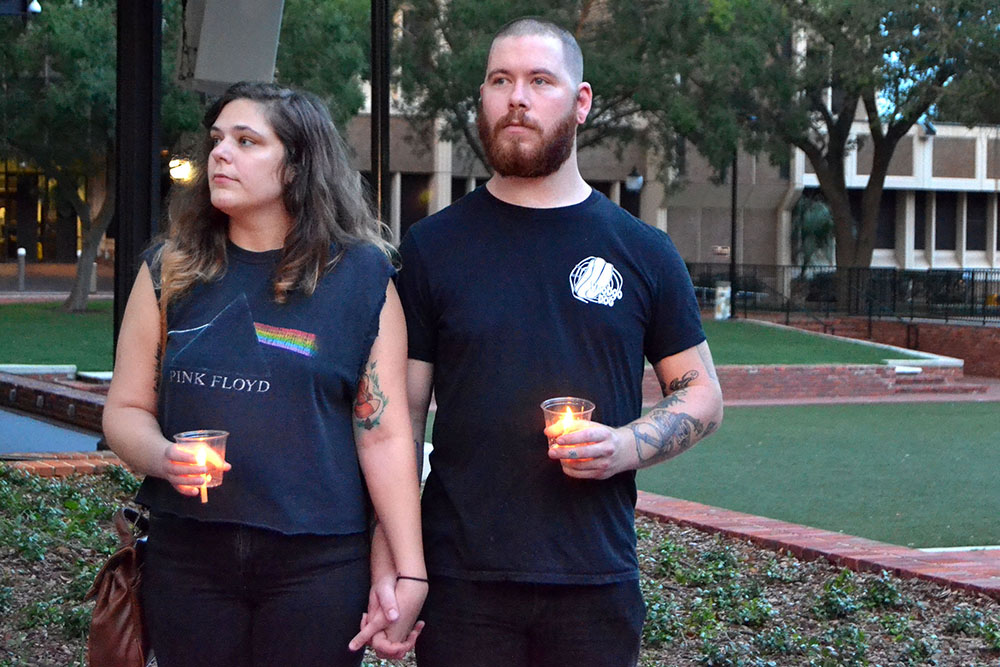 Suzanna Sprague, 24, marches with her boyfriend, Alex Flinchum, 25, during the candlelight vigil. Sprague came out to support love and to commemorate the lives lost during the Orlando shooting Sunday. (Patricia Ochoa/WUFT News) The March for Lives Lost candlelight vigil attendees cheer at the end of the march to mark the completion of the march and to cheer for everyone who attended. (Patricia Ochoa/WUFT News) Scott Purcell, a Gainesville resident, embraces a friend at the end of the March for Lives Lost candlelight vigil. (Patricia Ochoa/WUFT News) After the march, attendees head over to University Club, a gay club, to further commemorate the lives lost during the Orlando shooting with a champagne toast. (Patricia Ochoa/WUFT News)

Sunday at 5:12 p.m.: Gainesville community leaders are reacting to the mass shooting that occurred at an Orlando nightclub early this morning.

“I think it is extremely unfortunate that we are focusing on the fact-until we know more-that the shooter was Muslim,” said Killoran. “It was an anti-gay hate crime and I think we need to speak out against it and not let it be hidden by the populous prejudice of Muslims.”

Nancy Parkinson, a member of the Unitarian Universalist Fellowship Church, said this is a tragedy and is appalled with what is going on.

“It’s not just in Orlando…it’s all over this country,” said Parkinson. “We need to try to prevent shootings and the proliferation of guns and it’s not just people of one faith going after Americans.”

Parkison also said the Muslim community is peaceful and “they don’t believe in this radicalism.”

“The shooting is a part of this culture of violence and religious bigotry that has been going on in the media for the last six months,” Parkinson said. “I hope that the people in Orlando can all come together, in the coming days and weeks and pray in the churches and synagogues and mosques wherever they are for a peaceful resolution to this kind of situation. It’s not just in Orlando it’s all over this country and effective over the world.”

The City of Orlando has begun posting victims’ names at this site.

So far the list includes those whose family members have been notified including:

Andy Moss of Orlando was at the club at the time of the shooting. Listen to his story here:

3:30 p.m.: Alachua County Sheriff Sadie Darnell was in a teleconference with the United States Department of Homeland Security Sunday morning following the attack. She released this statement:

“Our world is no longer a safe and predictable place. We cannot allow ourselves to be lulled into a false sense of security. Today’s tragedy is a stark reminder that we are not immune from these types of domestic terror attacks nor the hateful motives which drive these assailants. Today’s attacks also highlight the importance of local law enforcement agencies having adequate access to, and appropriate funding for, the necessary equipment and training needed to effectively and efficiently deal with these types of threats and the danger they pose to our communities. No community ever wants to deal with this type of senseless loss of life. The citizens of Alachua County can be assured that their law enforcement officers are well-equipped, well- trained and stand ever ready to confront these issues should the need arise.”

2:54 p.m.: Alexandra Martinez, director of Alachua County Crisis Center, said the center is there for anyone who needs help.

She urges people to hold each other up as they process this tragedy.

LifeSouth Community Blood Centers in Gainesville are assisting with blood donations for victims.

Spokesperson Gary Kirkland said “As a blood center, we try to prepare for any emergency, but there are some emergencies that are larger than one blood center can handle. LifeSouth has been called by OneBlood, the blood center that serves Orlando, to help, and we will do anything we can. We have provided blood, but we are experiencing a blood shortage and do not have much surplus. We encourage everyone who is able to donate blood over the next week to help the victims of the shooting. Our thoughts are with the Orlando community during this tragic time.”

@LifeSouth repJill Evans says gay males who have been celibate for 12 months are welcome to donate @WUFTNews pic.twitter.com/Q4zoJKSfMn

The Pride Community Center of NCF will be hosting a candlelight vigil tomorrow at 7 pm at Gainesville City Hall. @WUFTNews

Ocala Mayor Kent Guinn had this to say: “Some called it a tragedy…that’s not a good word. It’s not a tragedy, it’s an atrocity….what has happened. We’re at war with at a people who have told us exactly what they’re going to do to us, and they’re doing it. It’s way past time that we’ve taken the necessary action to fight back and to deal with this issue. Until we do, this is just going to continue. It needs to end today.”

2:20 p.m.: Mayor Lauren Poe spoke with WUFT News by phone as he was about to board a plane. He offered these words:

“I am in complete sadness. I’m in mourning. I feel like there are just too many of these mass killings that are borne of hatred. Right now I just feel like the only thing that defeats darkness is light, the only thing that defeats hatred is love. And I’m trying to send that message out to the friends and families of each victim, and pray that we as a society can come together for a collective solution to this psychosis.”

Original story : An area hospital has reached out to Orlando area hospitals to offer help on Sunday after the deadliest shooting in United States history, which killed 50 people and injured over 50 more.

UF Health has been in touch with Orlando hospitals in several different ways, though it’s been told at this time its assistance is not needed, said Melissa Blouin, a spokeswoman for UF Health.

“We’ve been told at this time that they don’t need any assistance, but we are standing by,” Blouin said.

Blouin said that UF Health’s emergency department and trauma coordinator and chief executive officer have been in touch with officials from Orlando hospitals.

None of the victims have been transported to Gainesville, Blouin said.

There will be a march tonight at 8 p.m. in Gainesville starting at Ayers Plaza and continuing to downtown along University Ave.

A candlelight vigil will be held Monday evening at 7 p.m. at Gaineville City Hall.

The University of Florida has not yet planned any vigils or blood drives on campus for this week.

This is a developing story.  Check back for updates.