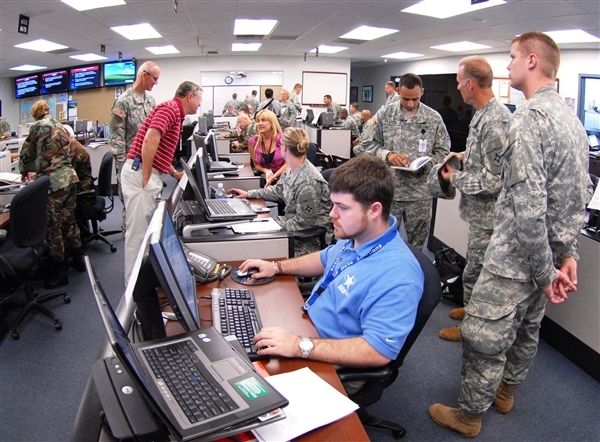 Hurricane Series: New Floridians May Not Be Prepared

The state of Florida hasn’t been hit with a hurricane in more than a decade, and that has state emergency managers concerned residents might not be prepared for the worst.

At the Camp Blanding National Guard base southwest of Jacksonville, a group of large, high-tech RVs are huddled in a parking lot amid pouring rain.

“This is the mobile command vehicle. Inside here it gives us the capability to bring our operations in the field,” he said.

Computer monitors displaying storm tracks and weather forecasts line the walls. Otherwise, it looks like a typical office trailer: A meeting area at one end and a copy machine sitting at the other end.

Normally, Florida’s response to disasters — like hurricanes or terrorist attacks — is coordinated from Tallahassee. But Gallagher said, for this exercise, everything the team needs is right here.

“A lot of the same sections and components you’ll see in the State Emergency Operations Center can be found in here,” he said. “You’ll find a logistics section, a finance section and geographic informations systems section.”

State officials test hurricane response every year. And, every five years, they test the mobility and efficiency of their contingency plans by taking their act on the road.

In this year’s practice scenario, Division of Emergency Management Director Bryan Koon said Florida is dealing with several disasters at the same time.

“Some intelligence indicated that some government buildings were targeted, and there are actually — as part of the exercise — been some attacks on government buildings,” he said. “So we deemed that it would be better to operate out of Camp Blanding because there was a tropical storm heading towards Florida: Hurricane Kemo.”

Koon said the exercise is a massive, coordinated effort between all of the state’s agencies and the Coast Guard, and not a single detail can slip through the cracks.

But he admits he’s worried about this hurricane season. He thinks Sunshine State residents have grown complacent and may not take the threat of another major storm seriously.

A recent study by AAA would suggest he’s right. Last year, the organization’s Consumer Pulse survey found nearly half of Floridians aren’t actively preparing for hurricanes, and 1/5 of Floridians said they wouldn’t consider evacuating their homes.

“Millions of new Floridians have come to the state, and even folks who were in Florida during that last series of hurricanes may have not been impacted by them,” Koon said. “So we’ve got lots of Floridians who don’t know what it’s like to go through a hurricane.”

But Koon said it’s not hard to prepare with resources like the state’s FLGetAPlan.com website. People can also track storms and weather alerts through their smart phones on the Florida Public Radio Emergency Network’s Florida Storms app, or by tuning into the state’s public radio stations for up-to-the minute info when a storm is approaching.