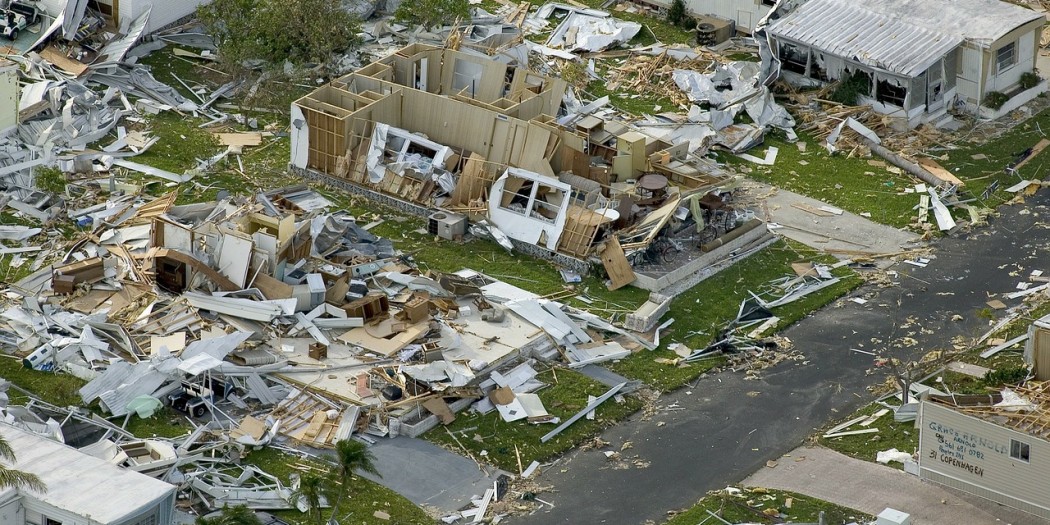 Hurricane Charley left a wake of destruction upon Punta Gorda, Fla. in 2004.

Joe’s Bike Shop sits right on the edge of Tallahassee’s Lake Ella, surrounded by picnic tables, and a walking path. In 2008, North Florida got hit by Tropical Storm Fay and the lake flooded. Peter Burchell, a mechanic for Joe’s Bike Shop, witnessed the effects of Fay.

“I remember coming back at one point when I thought the water would be just at the top of the sills…and a fish swam out. There were fish [and] a couple of turtles in here. It swam out of the shop,” Burchell said.

Burchell and bike shop owner Joe Mezzina ended up using a canoe to get their products and equipment out of the store. And while the structure was insured, Mezzina’s insurance didn’t cover flooding so he had to make up the difference.

In the years that followed, the state-backed Citizens Property Insurance Corp. ballooned to become the largest insurance company in the state, with more than 1 million policies.

Today, through a combination of new state laws, and an aggressive process called depopulation, Citizens Property Insurance Corporation has shed half its weight. Spokesman Mike Peltier said the company is back to insuring only the riskiest policies.

“What we’ve got left in our portfolio is older homes, those with loss histories [and] those are the policies Citizens [Property Insurance Corp.] was created to cover,” he said.

Florida Association of Insurance Agents President Jeff Grady said other insurance carriers are back too, courtesy of more than 10 years largely hurricane and storm-free.

“No wind really helps that. So you have companies who feel they can get their pricing now. They feel covered and Citizens [Property Insurance Corp.] is back to where it was with a smaller policy count, not competing with those companies,” Grady said.

But that doesn’t mean everything is roses. For one, rates aren’t based on what has already happened—but what could happen. One issue keeping insurers up at night, is related to a current issue, called assignment of benefits. Basically, homeowners are letting contractors represent them in insurance claims, and insurance companies say that’s inflating damage estimates.

“Right now, those inflated losses with water and roofs—those can be absorbed. But you put a large, catastrophic loss on top of that—and Florida starts looking bad again,” Grady said.

Another issue lurking for insurance companies is the National Flood Insurance program. It’s more than 20-billion dollars in the hole. Florida is number one in the nation for such claims. Payouts topped more than 117 million dollars in 2014. Insurers say nearly every part of the state is prone to flooding.

“You’re rolling the dice. If you have a flood, you could have some serious financial problems after the storm occurs. So talk to your insurance agent, and find out how much it costs to get coverage,” said Brian Koon, state emergency management director.

Despite the risks, many Floridians go without coverage. If a building isn’t in a flood zone, insurance isn’t required by most mortgage lenders. Some people may have dropped their coverage citing the high price. And others choose, to, as Koon says, roll the dice.

That was the case for Joe’s Bike Shop—which didn’t have flood insurance when fish were swimming out of its building after Tropical Storm Fay. Owner Joe Mezzina acknowledges the risk of going without.

“Nothing was covered because I didn’t have flood insurance and still don’t. The amount of money I would have spent on flood insurance over the years was astronomical compared to what I ended up having to spend, which was still a lot of money,” Mezzina said.

Mezzina’s logic: the shop has been there for more than 20 years before the flood and the savings from not paying for insurance, outweighed the amount of money lost when one finally happened. But he also said another flood could shut his shop down permanently. Insurance professionals say consumers should get an insurance check as hurricane season kicks off, to make sure policies are up to date, and coverage is sufficient.

Ten years with no major storms, has the industry on edge.