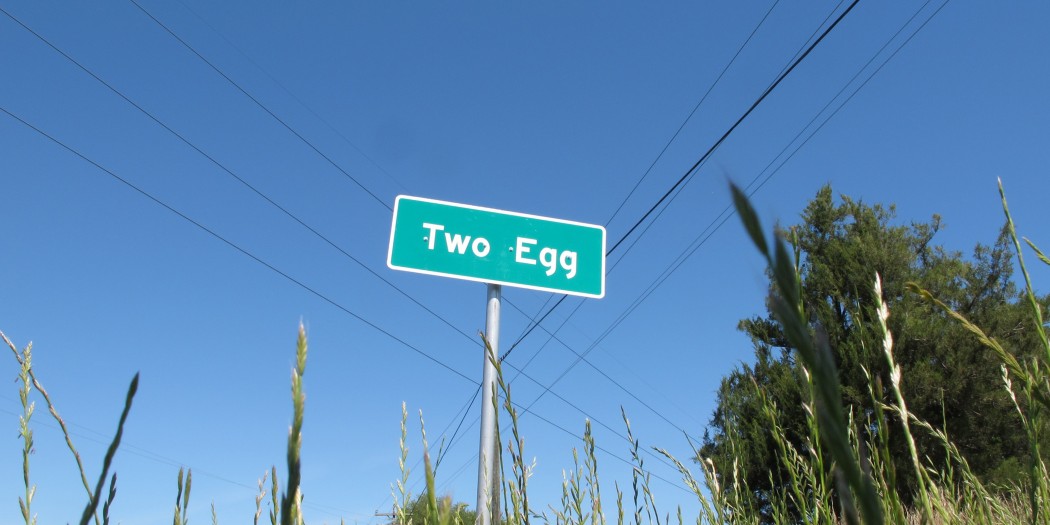 In this April 18, 2016 photo, a sign welcomes motorists to the town of Two Egg, Fla. Located about 70 miles northwest of Tallahasee, Fla., Two Egg is a small farming community where people used to trade eggs for goods. (AP Photo/Brendan Farrington)

What’s In A Name? Ask The Folks In Two Egg, Florida

The answer is the Alaska town of Chicken came before the Florida town of Two Egg, by about 30 or so years.

But they are neither first nor last in the country’s long list of odd-named places. In Pennsylvania you’ll find Intercourse, Virginville and Blue Ball. In Louisiana, if you’ve had too much of Moonshine, you can always visit Cut Off.

For some, like Santa Claus, Indiana, the name has created a major tourist industry. Others, like Two Egg, are dots on the map that get the occasional visitor curious about the name, but offer little besides a road sign — and even the sign often went missing until it was riveted in place.

“It used to be one of the most stolen signs in the state of Florida,” said Marcus Pender, whose grandfather owned a gas station and general store where trading eggs for goods led to the town name. “I even got a couple myself in the day.”

Here’s background on a few peculiarly named places in the United States:

Located about 70 miles northwest of Florida’s capital, Tallahassee, Two Egg is a small farming community where people used to trade eggs for goods at the general store. “People would come in and trade two eggs for meat and cheese,” said Pender. The store is no longer open, but people can still buy Two Egg cane syrup at a farm down the road. Details: http://www.twoeggfla.com .

Doug Devore runs a website devoted to this small mining town near the Canadian border. He says in 1902, locals planned to call the town Ptarmigan after a chicken-like bird they often ate. But they worried people would spell ptarmigan wrong, so they named it chicken instead. Most visitors stop here on tour buses headed elsewhere, but some people make a special trip. “There are some people who are just obsessed with weird town names,” Devore said. Details: http://www.chickenalaska.com .

Melissa Brockman, executive director of the Spencer County Visitors Bureau, says Santa Claus was supposed to be named Santa Fe, but another Indiana town already had that name. The story goes that in the 1850s, families gathered to come up another name on a snowy Christmas Eve. Sleigh bells were heard outside and children shouted, “Santa Claus!” And so the town was named. Santa Claus has fewer than 2,500 people and no fully operating traffic signal, but 1 million people visit each summer and hundreds of thousands of requests arrive in December from people who want their Christmas cards postmarked “Santa Claus.” Details:http://www.santaclausind.org .

Stories vary about how this Louisiana border town got its name, says Randie Canup, owner of the Hoot ‘n Holler guest cottage. One is that when the city applied for incorporation, it hadn’t picked a name, so “uncertain” was written on the form and it stuck. But Canup thinks the true story dates to the 1800s, when a steamship delivered goods to Caddo Lake ports. Shipping labels often peeled off in the humidity, and those boxes were marked “uncertain” and left at the final stop — which became known as Uncertain. With a population of about 100, tourists far outnumber residents. Cell phone coverage and Internet access are spotty but there’s fishing, birding and scenery. “When people come here, some of what they do is nothing. They just want the quiet,” Canup said. Details: http://www.cityofuncertain.com/index.shtml .

The town is named for Capt. Samuel Butts, who died in 1814 during the Creek War. A radio station owner tired of people cracking jokes about the county suggested a name change at some point but local business owner Henry Kitchen started a “Save Our Butts” campaign with T-shirts and bumper stickers. With the name now safe, a popular bumper sticker reads “Keep Our Butts Clean.” The water tower welcoming visitors driving in from I-75 proclaims “BEAUTIFUL BUTTS.” Details: https://buttscountyga.com .

Abner Weed ran a lumber mill at the base of Mount Shasta in 1897, and thus the city’s name. That doesn’t make it immune to marijuana jokes — there are tons of “I Love Weed” souvenirs to be found around town. Even the local brewery, Mt. Shasta Brewing Company, plays it up — and got in trouble when the federal government objected to bottle caps that read “A Friend in Weed is a Friend Indeed. Try LEGAL Weed.” Details:http://weedca.govoffice3.com .

Previous Hurricane Series: How Technology Has Changed Since Last Hurricane
Next May 31, 2016: News In 90

‘Everyone Should Show Respect To One Another’: Controversy Swirls Around Ted Yoho’s Confrontation With Alexandria Ocasio-Cortez

Attendance will be limited to delegates for most of the event, a far smaller crowd than President Trump had insisted on. Health and safety protocols will also be in place.