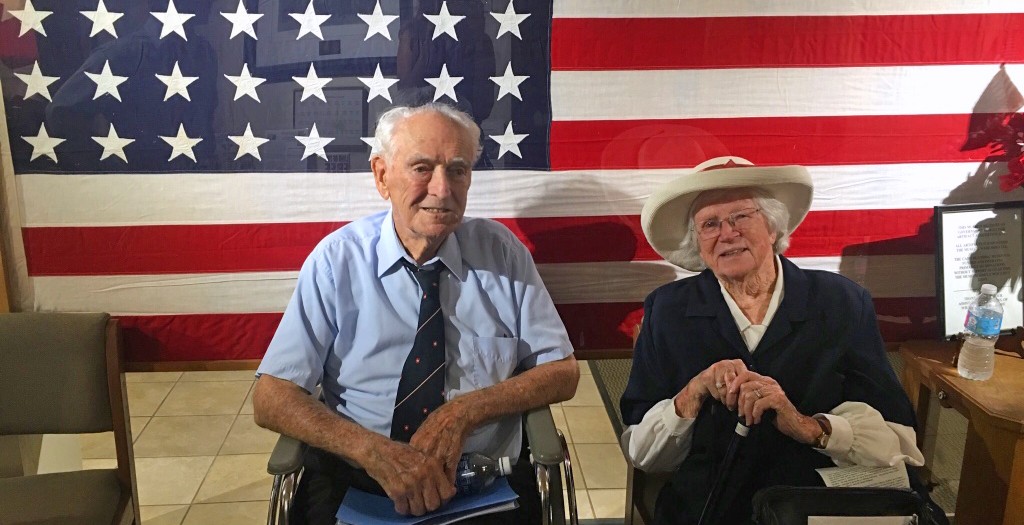 Retired Maj. Frank Towers and his wife, Mary Towers, greet visitors inside the Camp Blanding Museum. Towers spoke to a crowd of nearly 200 at the commemorative ceremony on Monday in Starke, Fla. Attendants heard a speech Towers and were invited to watch a 20 minute documentary about the history of the camp. (Matt Brannon/WUFT News)

Nearly 200 people gathered to honor and listen to the tales of a 98-year- old World War II hero at Camp Blanding in Starke this Memorial Day.

Retired Maj. Frank Towers, who served in the U.S. Army from 1940 to 1950, spoke about his military service, the history of Camp Blanding and paid tribute to the soldiers who died in Europe, many of whom remain there today— their bodies never returned home.

“(Memorial Day) means a day of recollection, that we should never forget these fallen heroes even though they’re buried far away,” said Towers. “It seems like they’re forgotten.”

But Towers has worked to make sure those soldiers are always remembered. He talked about an organization he established called “Les Fleurs de la Mémoire,” or the Flowers of Memory, based out of Normandy, France, where French citizens adopt the overseas graves of American soldiers.

His speech brought visitors to their feet with a standing ovation.

Towers has sat on the board of directors for the Camp Blanding Museum since it opened in 1990.  He still volunteers as an afternoon docent.

The ceremony ended with the sounds of Taps and a wreath laying to honor those killed and missing in action.

Janice Christianson and her friends rode their motorcycles from Jacksonville to attend the ceremony.

“My husband is retired (from the) Navy,” she said. “And my son is contemplating joining the military. So military commitment is in our blood.”