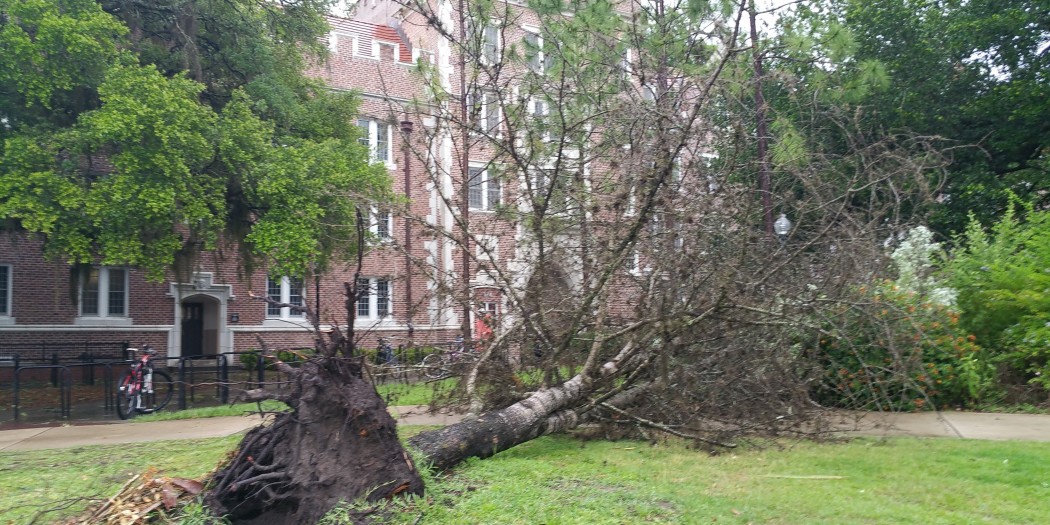 A low-intensity tornado may have blown through University of Florida’s campus Friday.

UF’s Emergency Management reported a series of wind-related damage that occurred Friday about 11:20 am.

The group received a report through the National Weather Service in Jacksonville prompting them to conduct a forensic investigation and capture available damage information.

The damage observed suggests a brief, weak tornado quickly spun up and dissipated, causing damage to the roof canopy at the Student Recreation and Fitness Center pool east of Ben Hill Griffin Stadium.

No one was injured, but workers reported pool chairs being picked up by the wind and rotating above the pool before being thrown to the other side, the report said.

Due to the damage, the rotation could’ve been caused by a tornado, according to Scott Cordero, the meteorologist in charge at the National Weather Service in Jacksonville.

“At a certain elevation in the Gainesville area, we had a mid-level rotation that was kind of broad in nature,” Cordero said. “Based on damage, it was either straightline winds or tornadic.”

The tornado was classified as an EF-0, the lowest category on the Enhanced Fujita Scale, a set of wind estimates based on damage.

The level of damage suggests a minimal category of wind speeds ranging as low as 65 mph to 85 mph, said David Prevatt, a UF associate professor in the department of civil and coastal engineering.

“We were probably on the lower side,” Prevatt said.

By documenting and publishing its findings on damage of wind events, the Wind Hazard Damage Assessment Group helps the public be prepared in the face of natural wind hazards, according to the report.

“Either way, if the winds are going straight or in a circular fashion, whenever there is a warning by the National Weather Service, it’s time to take heed and go to a place of shelter,” Cordero said.