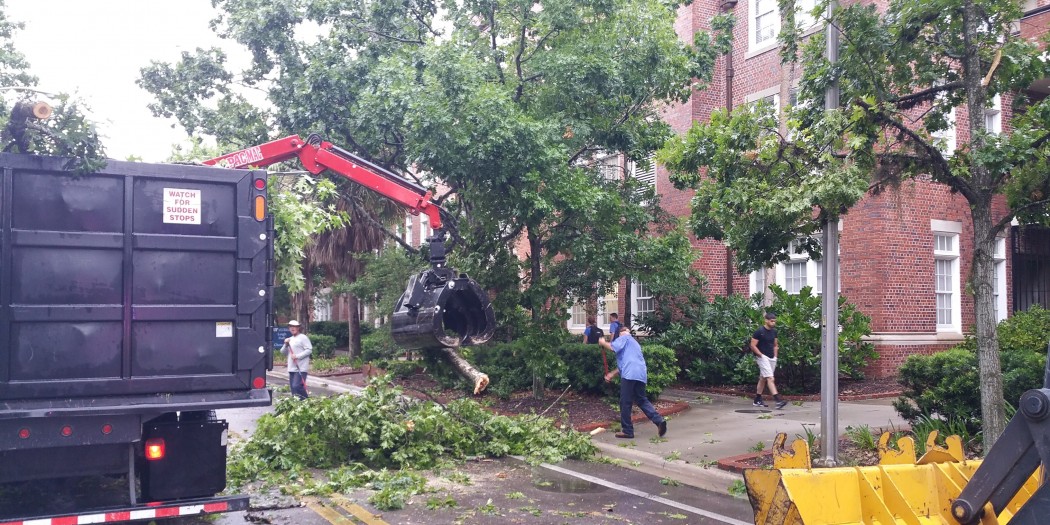 A cleanup crew clears the road Friday after a storm near Sisler Hall at the University of Florida (Photos courtesy of UF Department of Emergency Management).

Storms Cause Damage at University of Florida Campus

Severe thunderstorms swept through Gainesville on Friday afternoon, causing damage in several locations at the University of Florida campus and knocking out power on University Avenue.

Trees were reported down near Yon Hall, which is part of Ben Hill Griffin Stadium, according to the University of Florida Police Department.

The storm also caused damage at the nearby recreation center pool. Several trees were also reported fallen in the roadways near Buckman & Union roads on campus, blocking traffic.

Additionally, several large trees were reportedly blown over in front of the former president’s house on University Avenue. The storm also knocked out power for more than 4,000 Gainesville Regional Utilities customers Friday, according to GRU. Power has since been restored.

Kari Basso, a UF chemistry professor, was at her desk when the storm passed through campus.

Basso said she saw the trees bend over, and then the rain came down hard in sheets, but it went by quickly.

She said it was a bit stressful trying to get in contact with her family all over town.

“I was constantly looking at the radar in perspective to where they were and wondering, you know – texting and calling to make sure everybody was safe,” she said.

Contact WUFT News by calling 352-392-6397 or emailing news @wuft.org
Previous May. 20, 2016: News in 90
Next Public Speaks Out Against Phosphate Mining in Bradford County