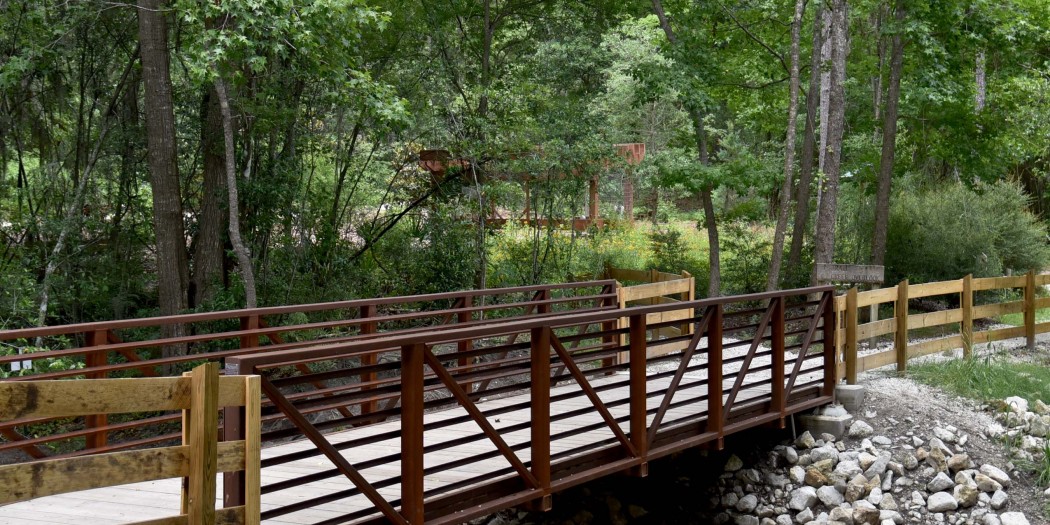 This is the new foot bridge that connects the recreational activity section of Cofrin Nature Park to the trails and memorial garden. (Jasmine Osmond/WUFT News)

After 10 years and roughly $300,000, the Cofrin Nature Park renovations are complete.

After getting the Gainesville and Alachua County to match donation money through grants and state funds, the park is ready for business. The one stipulation Gladys Cofrin made was that there was to be a suicide survivors memory garden built into the park.

The 30-acre property that is now the park was originally the Cofrin family’s homestead. She and her four siblings grew up on the property before it was put up for sale by her parents in 2003.

After working at the Alachua County Crisis Center for 20 years, she wanted a place for survivors and their families to grieve.

“Being able to purchase my family’s property and being able to do all this has been very meaningful for me,” she said.

Cofrin bought the property from her parents, and although she originally planned on living there, she decided to sell the land to the city in order to create a nature park.

At the time, the donation was the largest parcel of land available within city limits.

The garden features only Florida-native plants, said Susan Nugent, the master gardener for the park. Since it’s just barely three years old, many of the flowers and trees have not yet matured. Right now there are no plans to expand the garden, just maintain and nurture it.

“We tried to make the garden animal friendly, bird friendly and people friendly,” she said.

“It’s not a recreation park, it’s a nature park,” she said. “Which means a lot of it is going to remain undeveloped.”

The design for the garden was drawn up by University of Florida landscaping architecture grad students in 2006.

It’s been in construction since 2013. Local artist Greg Johnson was brought in to design the sculpture that would be a main feature of the garden, said memory garden coordinator Judy Broward. The sculpture is made of six standing stone pillars to represent the six people closest to a suicide victim who are affected most. In the center of the sculpture there is pillar laying on its side, broken.

All further maintenance will also be kept by the center.

“After Saturday I can say it’s done,” she said. “There will still be maintenance, but besides that it’s done.”

When the property was purchased, it was overgrown and dilapidated, said nature manager Linda Demetropoulos. The house that was once the Cofrin family home was falling apart, the tennis courts were overgrown and the old septic tank raised environmental concerns. All improvements have been incremental. The most recent renovations include the continued construction of the garden, the demolition of the old house, a new foot bridge and fixing the erosion and sedimentation of the creek’s shoreline.

One renovation that can’t be seen is removal of the old septic system to connect to city sewer.

This will prevent further pollution to urban creeks and waterways, she said. The park was closed for six months during these renovations but is now re-opened. The total renovations, excluding the memorial garden, cost between $200,000 and $300,000 and were paid for out of Gainesville and county tax revenue.

There will be two simultaneous tours Tuesday showing the shore stabilization project, with before and after photos, and tours of the memorial garden hosted by Broward.

Local organizations will also have stations to educate visitors and talk about different native plants. Parking will be available directly east of the park at the University City Church of Christ.

“[The renovations] weren’t for cosmetic reasons,” Demetropoulos said. “But it’s much more beautiful.”