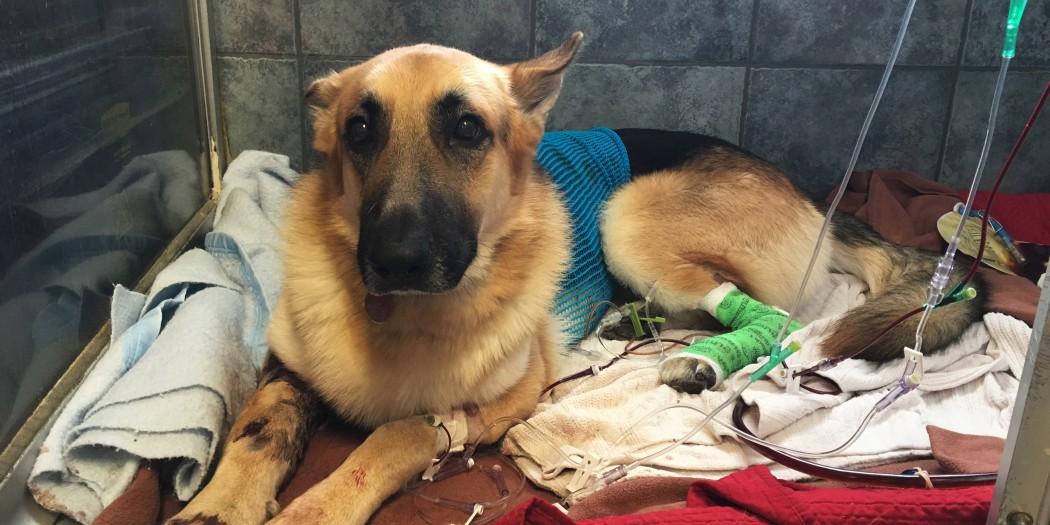 Haus, a German Shepherd, recovers from a snake bite at Blue Pearl in Tampa, Fla., Friday, May 13, 2016. When a venomous Eastern diamondback rattlesnake appeared in the backyard of a 7-year-old Florida girl, her German shepherd, Haus, came to her rescue, refusing to back down despite multiple snakebites. (AP Photo/Tamara Lush)

TAMPA, Fla. (AP) — When a venomous Eastern diamondback rattlesnake appeared in the backyard of a 7-year-old Florida girl, her German shepherd came to her rescue, refusing to back down despite multiple snakebites.

And now, hundreds of donors are coming to her family’s rescue, quickly topping the goal of $15,000 Friday on a GoFundMe account to help pay for the antivenin needed to keep the dog alive.

Molly DeLuca was playing with her 2-year-old shepherd, named Haus, when the snake showed up on Wednesday. Haus jumped between them and was bitten three times, suffering damage to his kidneys. Vets are now expecting a full recovery.

Donya DeLuca says her daughter and the rescue dog they adopted two months ago are inseparable, so she’s not surprised he would risk his life to save her.