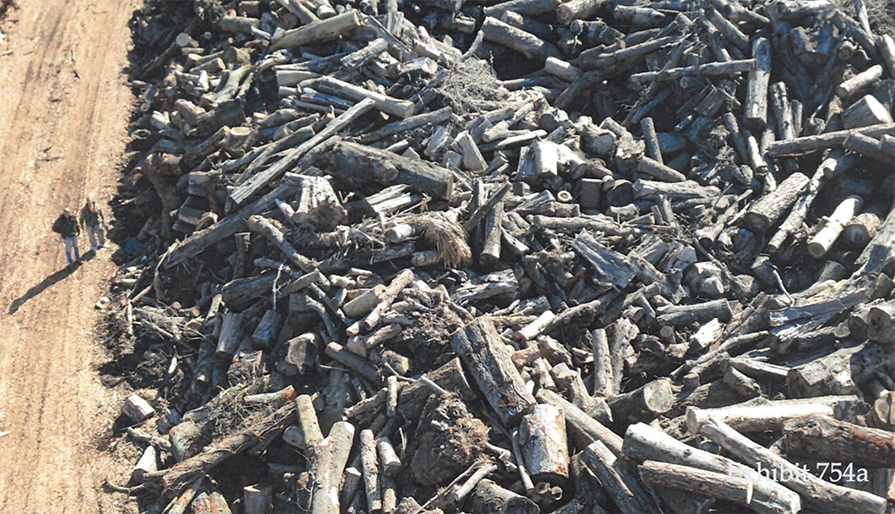 An image entered as an exhibit in Wood Resource Recovery's lawsuit trial. It shows two employees walking along the enormous stockpile of wood the company built to grind down into burnable chips for the biomass plant in Gainesville. (Courtesy: Bill Gaston/Wood Resource Recovery)

Gainesville Renewable Energy Center (GREC) needed thousands of tons of wood as it began operating in 2013. That wood is collected and ground into tiny pieces that burn more easily and thus generate electricity for Gainesville Regional Utilities customers. Wood Resource Recovery, the Gainesville company that acquired and shredded wood for GREC, filed a lawsuit in 2015 claiming the biomass plant operators had breached their contract.

On Tuesday — the second day of an eight-day trial in an Alachua County courtroom — GREC’s lawyers attempted during cross-examination to grind down Bill Gaston (the wood supplier’s owner) and his lawsuit’s allegations.

(Here’s what happened on day one of the trial.)

Robert Vezina, an attorney for GREC, began Tuesday’s cross-examination with a deep dive into the problems associated with bagged yard waste that ended up at the biomass plant. Wood Resource Recovery was paid to pick up plastic bags of yard waste from Alachua County and elsewhere.

Wood Resource Recovery employees then emptied those bags by hand.

And they were supposed to dispose of the bags.

The painstaking method of removing burnables from bags was required because of a simple calculation. The amount of plastic inside a wood shipment could only account for a maximum of one-tenth of one percent, or about two pounds per ton. Plastic doesn’t burn as well as wood, nor is burning more than a certain amount of it allowed under GREC’s state air permit.

GREC said as early as 2013 that there was too much plastic ending up in its wood supplier’s deliveries.

“It is virtually impossible to get all of the plastic out of all of the loads,” Gaston said.

“That isn’t what I asked, sir,” Vezina said. “My question was very specific. There are not supposed to be any full-sized plastic bags or pieces of plastic bags, because all of that has been debagged — if, in fact, the processing is being done as it should be done.”

“That is the goal,” Gaston said.

Vezina later questioned Gaston on a separate issue related to the supplier’s operations. After Gaston and his employees would shred and grind down thousands of tons of wood, it would need to haul those tons to GREC, located next to Gainesville Regional Utilities’ Deerhaven Generating Station on U.S. 441.

When Gaston’s trucks approached GREC’s receiving station to drop off wood — particularly when the plant began operating in 2013 — the drop-off would sometimes take more than 30 minutes.

Time is money, and those drop-off delays were costly, Gaston said.

The delays were caused, in part, by GREC not allowing Gaston’s trucks to use all three of the plant’s delivery bay lanes. GREC’s attorney disputed how often the lane reduction was in effect.

“Based upon the data that has been produced, there was a two-bay (lane) restriction for 87 days,” Vezina said. “But that for 72 percent of the time WRR delivered fuel to this plant, you had three bays open to you and in use.”

Later on Tuesday, Orlando-based forensic accountant Robert D. Morrison provided testimony about how exactly he calculated for Wood Resource Recovery the $17 million total damages the company is requesting from GREC; GREC’s attorneys argued at length against his calculations.

Circuit Judge Monica Brasington, who is overseeing the non-jury trial, will make a decision in the case later this month.