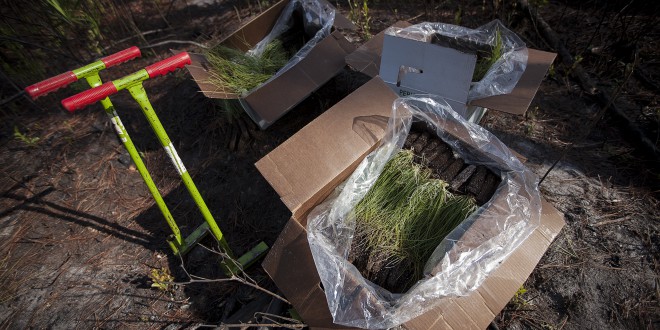 An estimated 40,000 longleaf pine seedlings are set to be planted in Little Orange Creek Preserve in Hawthorne later this year.

Funding for the effort comes from Tree Fest, an annual conservation fundraiser that coincides with Earth Day and is put on by two Gainesville companies, Swamp Head Brewery and Solar Impact. This year’s event, held Saturday at the brewery, was attended by about 1,400 people, and every beer sold there resulted in a pledge of planting five trees. Food purchases and donations contributed, too.

The seedlings are set to be planted during the coming winter and are part of the Alachua County Trust’s effort to restore longleaf pine habitat in Little Orange Creek.

Longleaf pines used to be a large part of Florida’s ecosystems but are now nearly decimated from logging.

“When you’re planting tens of thousands of seedlings, it can become expensive,” Ivor Kincaide, the trust’s land manager, said in an email to WUFT. “Swamp Head Brewery and Solar Impact created Tree Fest to help cover the cost of planting those trees.”

Solar Impact, a solar-energy equipment supplier, has been working with Swamp Head for two years and helped the brewery become Florida’s first solar-powered brewery. While working together, the businesses discovered they both had relationships with the Alachua County Trust.

Since 2014, Solar Impact has been supporting the trust by paying for 500 trees for each house that has the company install solar panels and 1,000 trees for each business. Meanwhile, Swamp Head has given out trees on Arbor Day to people who came to the brewery.

“We recognized that there was an absence of a central event in Gainesville or Alachua County around Earth Day or Arbor Day every year,” said Mike Garrett, director of sales and marketing at Solar Impact, “so we saw an opportunity to bring people to the brewery and show off the solar here and kind of fill that gap in Gainesville.”

Last winter, the Alachua Conservation Trust’s staff and volunteers planted about 20,000 longleaf pine seedlings at Little Orange Creek as a result of Tree Fest in 2015, the first year the event took place.

Laura is a reporter who can be contacted by calling 352-392-6397 or emailing news@wuft.org.
Previous 2 Die In Separate Marion County Wrecks
Next Gainesville Officials Want Alachua County To Drop Its Lawsuit About An Old Bus Facility

Little Awesome Preserve is expected to be accessible to the general public by the end of 2022.