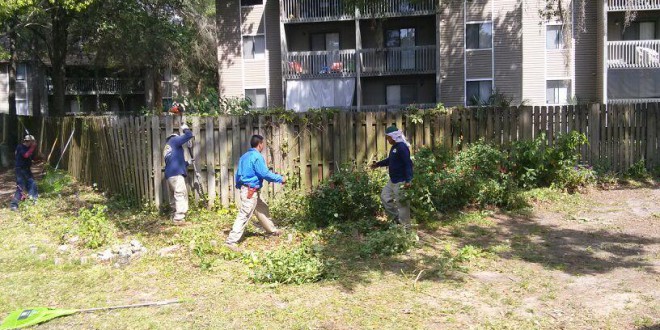 Residents of Aviara Apartments in Gainesville woke up March 8 to find many of their personal belongings that had been outside missing, thrown in dumpsters by complex employees.

According to a packet of revised community policies provided by resident Jessica Marsh, “All items outside of your rental dwelling will be trashed. These include but are not limited to: chairs, pots, toys, pets’ food trays, cleaning equipment, BBQs, etc.”

The packet of rules was posted to residents’ doors on Feb. 8, with the compliance deadline for the rules set for March 8. The last page is an agreement that asks for residents’ signatures.

Other rules include a curfew for “once it has become dark outside” and a retroactive ban on 21 dog breeds, including pit bulls, boxers, German shepherds and Rottweilers.

Some members of the complex — including six who declined to be named — told WUFT News that they are upset by the change.

“When we signed our second lease, they didn’t give us any new community rules,” said Marsh, who has lived there for two years with her boyfriend, “so I’m not entirely sure where this is coming from.”

Layne Prebor, assistant general counsel at the University of Florida’s Student Legal Services, said that if residents don’t sign the form, they can’t be held to the rule changes because those rules weren’t outlined in their initial leases.

“Asking somebody to unilaterally impose a change of lease midstream is generally not going to be enforceable,” he said.

Marsh, a 32-year-old graduate student at UF, has taken it upon herself to seek legal recourse.

She said she’s met with Gainesville attorney Robert W. Bauer, who is reviewing her documents, lease and situation before deciding whether to take on what could be a class-action lawsuit. Bauer didn’t respond to WUFT News’ requests for comment.

“What immediately caught our attention was the fact that they wanted us to sign these new community rules, and we thought, ‘We’re not signing anything that wasn’t part of our initial lease agreement,’” Marsh said.

In that agreement, provided by Marsh, the management company notes that it can make “reasonable changes to written rules” at any time as long as they are delivered to residents.

But Marsh said she questions whether February’s revisions could be considered reasonable.

“I remember I went down to the office when I first got the document, and I was like, ‘What is this? You can’t change all of these policies,’” she said.

Among Marsh’s personal belongings trashed were gardening tools and an in-ground herb garden right off her porch. She said she was given verbal permission to plant the garden from the former property manager.

“It was emotionally upsetting to see this kind of aggressive move from an apartment complex,” she said.

Marsh’s complaints were aired in a March 31 WUFT-TV broadcast, and on Tuesday, almost two weeks after the broadcast, a separate butterfly garden Marsh had planted along a fence on the property was removed.

Marsh said she had been told by management that the butterfly garden would be permitted despite the herb garden being removed.

“They said they were letting us keep it,” she said. “But then on Tuesday, I went downstairs, and there was a lot of commotion going on in the backyard. … And I go back there, and they’re ripping out the butterfly garden.”

Marsh said she feels as though she is being retaliated against.

“There was no warning,” she said. “We woke up, and the entire thing was being torn out.”

Another Aviara tenant, 32-year-old John Schmitt, said he moved in after Feb. 8, when the new rules were given to tenants, but that his lease didn’t include them.

“I would think that the people who moved in and signed their lease prior to this amendment are grandfathered into their lease until that lease runs out,” he said. “I would hope, at least.”

One policy that residents said is particularly unreasonable is the after-dark curfew. In full, the rule says: “At our property, we have a DARK curfew in effect. This means no one regardless of age may be outside once it has become dark outside.”

“When we saw it,” Marsh said, “we just started laughing. … This, like, can’t be real, right? It feels like we’re living under martial law.”

Schmitt said that, to his knowledge, there has been no dialogue between management and residents regarding the new policies.

“They can’t tell us we can’t be outside,” he said. “I work until later, so how am I supposed to leave my car and go to my house?”

Student Legal Services’ Prebor said that the curfew rule, as stated in the new community policies, is too broad.

“I don’t think I’ve ever heard of curtailing someone’s movement from an apartment complex,” he said. “I’m not exactly sure what they’re attempting to do with that curfew provision.”

Bradley is a reporter for WUFT News and can be contacted by calling 352-392-6397 or emailing news@wuft.org.
@@bradIeynorman
Previous Alachua County Animal Services To Host Free Adoptions
Next You Brew You: A Taste of the Gainesville Coffee Culture