The Florida Department of Education has named an employee of Alachua County schools as a finalist for the Florida School-Related Employee of the Year Program.

The program is meant to recognize custodians, bus drivers and other non-teacher employees across Florida.

Angela Wright, who works as the computer lab proctor at Hawthorne Middle/High School, was named this week as one of five finalists for the award. In February, she was named the 2016 Alachua County School-Related Employee of the Year.

“This is going to add fuel to my fire,” Wright said in a news release of getting nominated. “You have to use your talents to do even more than you think you’re capable of. I’m probably not doing all that I’m capable of doing, so I’ve got work to do.”

Alachua County schools spokeswoman Jackie Johnson told WUFT that Wright’s nomination is “a big thrill because she goes above and beyond every day.”

“The fact that she is getting this additional recognition means an awful lot to us,” Johnson said.

Aside from her time in the computer lab, Wright is also the coach of the school’s Brain Bowl team, sponsor of the Pre-Collegiate Club, member of the school advisory council and the school’s unofficial photographer, according to the release.

She also regularly attends sporting events and other school activities, and she offers homework help, school supplies and advice, according to the release.

“She is a tireless cheerleader, encourager, fundraiser and general supporter for our school,” Hawthorne Middle/High School Principal Libby Hartwell said in the release. “She rarely misses and event, and if she does, her absence is always noticed.”

Outside of the school, Wright dedicates her time to serving others, like through mission trips to orphanages in the Caribbean, according to the release.

Wright and the other finalists will be recognized at a celebration in Orlando later this month.

“Angela is one of those special people who go far above and beyond what is spelled out in their job descriptions to support students,” Superintendent Owen Roberts said in a release. “We’re very proud to have her representing our district at the state level.”

Megan is a reporter who can be contacted by calling 352-392-6397 or emailing news@wuft.org.
@@MeganKearneyUF
Previous Putnam County Investigators Are Still Trying To Find Out Who Set Its Forests On Fire
Next Nurse Practitioners, Physician Assistants Granted Prescribing Privileges 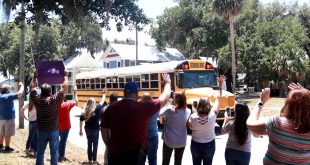 The University of Florida’s College of Veterinary Medicine has officially named Dr. Dana Zimmel as …