The Marion County Election Center received multiple phone calls from citizens with concerns about a letter they received in the mail which claimed they were not registered to vote, according to a news release. Recipients of the letters lamented that some of the letters were addressed to deceased family members. 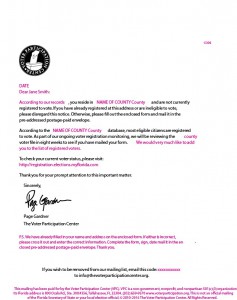 Wesley Wilcox, the Marion County Supervisor of Elections, said the letters were likely not evidence of fraud, but the office is still investigating the letters.

“Probably not fraud,” Wilcox said. “Fraud is a very tough, tough issue. This is more of a misinformation. Actually, I would deem it more of a phishing attempt.”

The Voter Participation Center distributed the unofficial letters, which are in no way affiliated with the Florida Secretary of State or Marion County Supervisor of Elections. The information in these mailers may be outdated and inaccurate, according to the Marion County Election Center.

Voter registration status can be checked at VoteMarion.com or by calling the election center at 352-620-3290.

To make a report or be removed from future mailings, contact the Voter Participation Center can at 877-255-6750 orwww.voterparticipation.org.

Caitlin is a reporter for WUFT News and can be contacted by calling 352-392-6397 or emailing news@wuft.org.
@@FranzCaitlin
Previous Search For Putnam County Deputy Sheriff In St. Johns River
Next Millions Healthier Than BMI Indicates, Study Says