The lush orange groves that line the back roads of Florida have been threatened by HLB, or citrus greening disease, since 2005.

For about three decades, now retired University of Florida professor Bill Castle has been researching this issue and developing rootstocks to help citrus growers fight HLB all over the state. Earlier this month, Castle was inducted into the Florida Citrus Hall of Fame for his contributions to the industry.

Castle was nominated to the Hall of Fame by former student Pete Spyke, whom Castle taught about 40 years ago.

Spyke, who now owns a citrus store, said that Castle taught him his first citrus class at UF.

“I would say that his work influenced my entire professional career,” Spyke said.

Since citrus greenings became a problem, the number-one goal of Castle and his colleagues, Fred Gmitter and Jude Grosser’s research has been to develop an HLB-resistant rootstock, Castle said.

Rootstocks have several horticultural advantages and attributes that are important in citrus production, said Jim Graham, a UF IFAS soil microbiologist. They give trees better tolerance to pests and diseases and provide tree-size control.

Rootstocks are also adaptable to certain soil conditions and stresses that occur in our Florida soils, Graham said.

While newer versions of rootstocks have shown to be more tolerant of citrus greening, no rootstocks have proven to be resistant to the disease yet, Gmitter, Castle’s colleague, said.

Many growers are planting new orchards with modified rootstocks to give trees longer lifespans and better production rates. There are about 70 to 75 different plantings that are being tested throughout the state.

Castle became involved with rootstocks in graduate school after Alfred Krezdorn, the former UF fruit crops department chairman, encouraged him. The rare opportunity to engage with citrus growers as a result of his research stimulated his interest in the field, he said.

“I suppose just by good fortune when I was about to graduate, a position opened up at the research and education center, and I applied for it and was chosen,” Castle said. “And so, the rest, as they say, is history.”

John Gose, a citrus developer at Lykes Citrus, said that Castle is the “go-to man” when it comes to rootstocks in Florida. Castle has helped Gose set up multiple rootstock trials since 1981.

In addition to teaching at UF and researching rootstocks, Castle devoted time to teach students at the elementary level.

For about 20 years, Castle taught fourth and fifth graders at Career Day at Lake Alfred Elementary School, where his wife was the principal. He would lead the students in an orange-juice taste-test experiment where they measured the sugar content using a lab instrument.

“If you’ve never done that sort of thing, you don’t know how awesome of an experience it is — to be in there, talking to those young minds, seeing their reaction to learning about something that they all think is really cool,” Castle said.

Though Castle has been inducted into the Florida Citrus Hall of Fame, he said he will continue contributing to the citrus industry, whether it is by working with rootstocks or by helping growers find citrus alternatives.

Jennifer is a reporter who can be contacted by calling 352-392-6397 or emailing news@wuft.org.
@@jennkjenkins
Previous April 1, 2016: Morning News In 90
Next Gainesville Apartment Complex Imposes Strict Rules 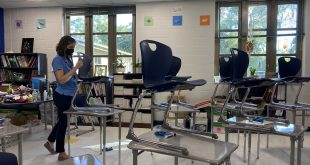