Florida Fishers To Get License Pass This Weekend

Fishers will be able to cast their lines in any freshwater waterway in Florida without a license this weekend, Gov. Rick Scott announced Wednesday.

This Saturday and Sunday’s program is one of four free-fishing weekends — two freshwater, two saltwater — the Florida Fish and Wildlife Conservation Commission offers each year, according to a news release from Scott’s office.

“April is the nicest time of the year weather-wise,” Bob Wattendorf, marketing and special projects coordinator at the Florida Fish and Wildlife Conservation Commission, later told WUFT. “It’s a very good time to give anglers a shot at catching sun fishes.”

Wattendorf said the next license-free freshwater weekend is scheduled for June and corresponds with the National Fish and Boating Week.

A Florida fishing license costs $17.50 per year for state residents, and non-residents can get a three-day license for that price, he said.

“The hope is by getting people who haven’t had the opportunity to fish to go,” he said, “they will continue to go back.” 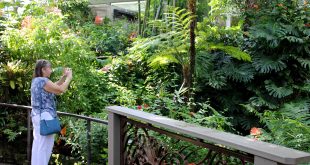 Green pastures full of native, colorful flowers scatter the University of Florida’s campus as part of a new plan to help protect the pollinators of Florida.