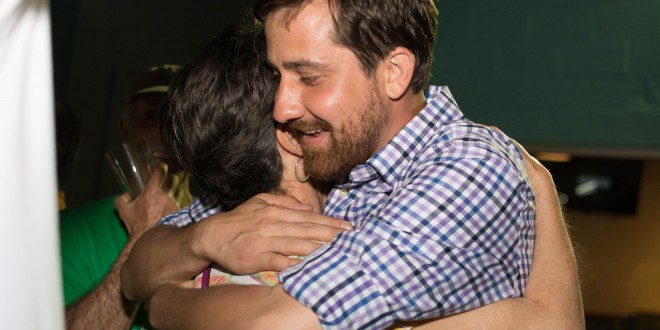 Hayes-Santos defeated attorney Jim Konish with more than 80 percent of the votes. Nearly 5,000 votes were cast in the race.

Hayes-Santos will take Randy Wells’ seat this spring, which covers parts of the University of Florida’s campus, midtown and downtown.

Hayes-Santos, currently the director of UF’s entrepreneurship masters programs, emphasized funding parks and arts programs in the city, as well as installing a five-tier system for gradually lowering utility rates.

He also wants to increase the density of downtown area development to create a larger tax base to ultimately lower rates for the city.

Konish ran for the District 4 seat on a platform aimed at privatizing or closing Dignity Village and Grace Marketplace to make the city less of a destination for the homeless, he said. He also entered the race stating his intention to serve only one term if elected.

Konish said he will continue to pursue his lawsuit against Hayes-Santos.

“We believe that my opponent, my only opponent, does not satisfy the residency requirement, so we are challenging his qualification to sit on the city commission,” Konish said. “Thats an ongoing problem, he’s been unwilling to address our concerns. We don’t believe he’s been truthful.”

“There is no truth in his accusations,” Eastman said.

Konish said he will not just continue with the lawsuit against Hayes-Santos, but he will continue challenging Hayes-Santos when he is commissioner as well.

“I’ve opposed him as best I could and I’m going to continue to oppose him after these votes are counted,” Konish said.

As Hayes-Santos thanked the volunteers that worked on his campaign, he also thanked one special supporter:

“I want to thank my mom, Alycin. I think she worked harder than myself.”

Caitie is a reporter for WUFT News and can be contacted by calling 352-392-6397 or emailing news@wuft.org.
Previous Donald Trump Won All 13 of These North Central Florida Counties
Next Marion County Voters Approve Sales Tax Increase