Your Signature Is Everything When You Vote By Mail In Florida 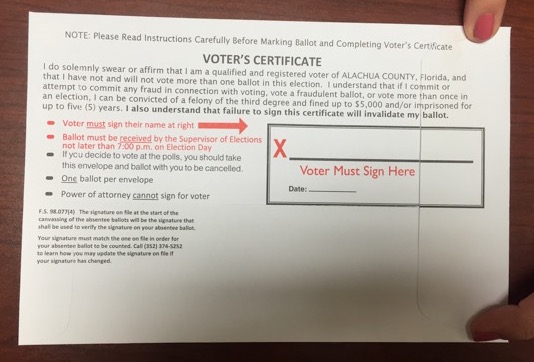 More than 100 Floridians in Alachua County who voted in the presidential primary were unaccounted for in the 2014 election due to user error.

Alachua County Supervisor of Elections Pam Carpenter said the increase in mailed-in ballots has made a double-edged impact on the voting system.

Unlike a driver’s license, the state does not require voters to update a signature, which seems to be the root of signature inaccuracy errors.

According to Carpenter, each voter has a signature that is registered in the system to be compared to the certificate envelope that the ballot is placed in when mailed.

When and if the signature on the outside of the certificate envelope does not match, the envelope therefore is not opened and the ballot is not processed until the resident is contacted to verify the signature, Carpenter said.

In the 2014 election, 0.54 percent of voters’ certificate envelopes in Alachua County were deferred because of signature differences or no signature was given.

According to Carpenter, if an envelope cannot be accepted because it doesn’t match, a letter will be sent out with a voter application form so that the voter can update his or her signature before the next election.

“Some send it back, some don’t,” she said. “Some names come through two, three, four times and they don’t update their signature after getting the letters.”

Carpenter said she is confident that if voters update their signature every so often, the number of signature errors will decrease.

“The biggest thing is that voters have a valid signature on file,” she said. “If anyone ever has a question about their signature they can contact our office and we can help them with it.”

Although mailing in a ballot can mean no line and not leaving one’s home, another issue is the office receiving the ballot on time.

According to Carpenter, it can take four to five days for a mailed ballot to be received and the office cannot accept any ballots after 7 p.m. on election day.

In the 2014 election, 117 ballots were received late, therefore being unaccounted for and in the 2012 election the amount of ballots received late was more than 200 in Alachua County.

Caylee is a reporter for WUFT News and can be contacted by calling 352-392-6397 or emailing news@wuft.org.
@@CayUnderwood
Previous Mining Company Promises Innovation; Protesters Stand Ground
Next Three-Month Limit For SNAP Benefits