But the Gainesville Police Department released this photo in the meantime: 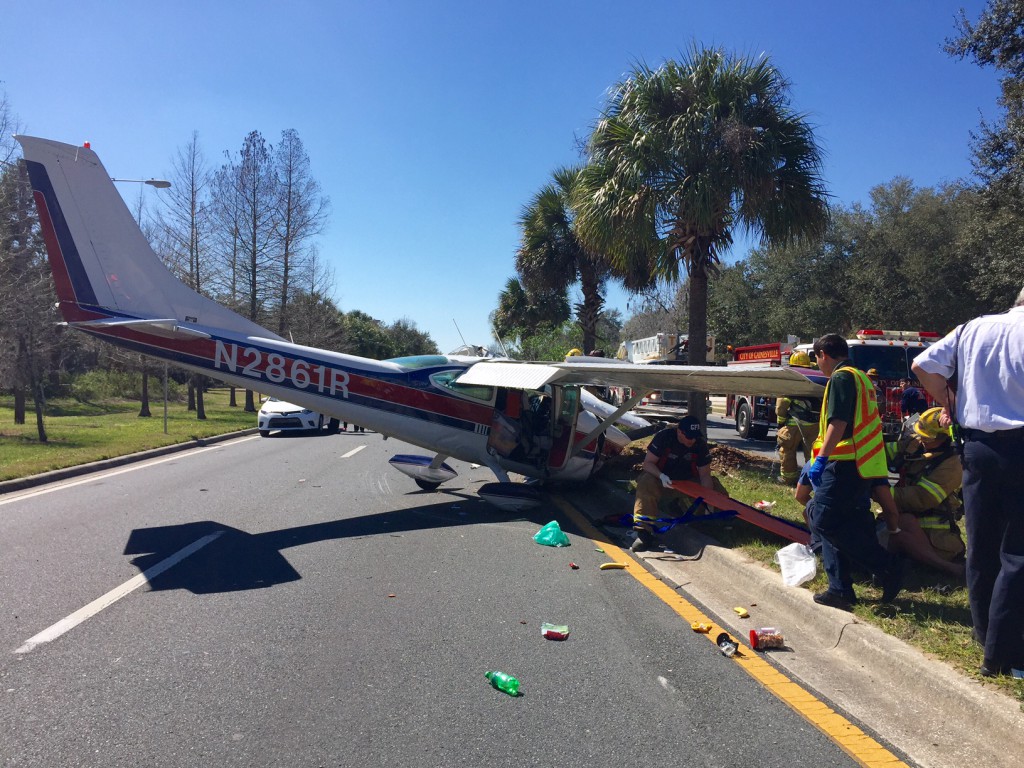 N-number 2861R is registered to a Cessna 182K owned by Walter Amon of Scottsdale, Ariz., according to Federal Aviation Administration records. This confirms eyewitness reports from those on scene before authorities tarped the rear of the plane.

Glancing outside her church’s small window, something caught Beverly Crawford’s eye a few minutes past noon on Sunday.

At first, she wasn’t going to alert the 100 people who had come to hear her message.

“While I was in the midst of speaking, we all heard that boom. We all thought it was a car accident,” said Crawford, who preaches with her husband Todd at Gainesville Family Worship Center.

What they heard was a pilot making an emergency landing in a small single-engine plane just east of the median in the 1900 block of NE Waldo Road.

The pilot and passenger, whose names were not released at the scene, experienced engine trouble and smoke in the cockpit, according to Gainesville Police Department spokeswoman Tscharna Senn. The plane, which was northbound toward Gainesville Regional Airport, clipped a palm tree with its wing as it descended less than 50 yards south of Gainesville Family Worship Center.

INCIDENT UPDATE :
Two patients who were on the plane have been transported to the hospital in stable condition. pic.twitter.com/xbamqojSjg

“Fortunately, the pilot was able to avoid any of the pedestrians or motorists in the area,” Gainesville Fire Rescue spokesman Michael Cowart said.

Kyler Childs was sitting in the church when he heard the crash. Some people glanced around, he said.

“I started to get up,” Childs said, but he thought it was just a falling tree.

Beverly Crawford described watching the pilot exit the plane and sit on the median “in a state of shock … it was incredible. That could have landed right on the building.”

Her message for the church on Sunday: be grateful.

“I woke up saying how grateful I was: about Black History Month, about people paving the way for us, about how Jesus Christ died on the cross and paved our way,” she said, “…not knowing that this was going to happen.”

This is what happen while I was Preaching in front of our Church less then a Hundred feet away. My Message was John 10:1-11 Sub: I am Grateful he did it for me. CHOO CHOO