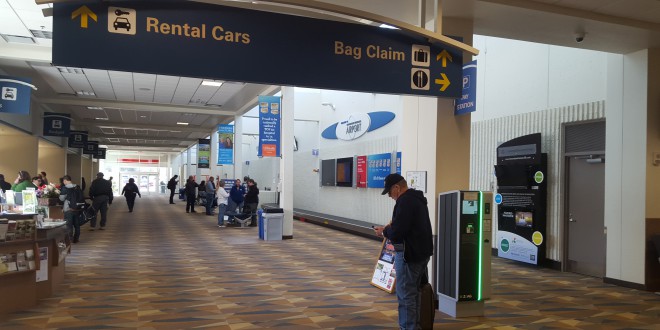 The inside of the Gainesville Regional Airport. Lights on one of the airport's runways went out Wednesday night. (Lucas Wilson/WUFT News)

Runway lights at the Gainesville Regional Airport went out about 10 p.m. Wednesday, keeping a flight after dark grounded.

In total, more than 200 people were rebooked or rerouted, according to a news release from the airport.

The lights were already scheduled to be replaced within a couple of months, but in the meantime, because of Wednesday’s outage, the airport hopes to provide a temporary fix.

There’s no set timeline for the fix, so for now, the decision on whether to land in the dark is up the airlines.

The airport’s two primary airlines, Delta and American Airlines, could not immediately be reached for comment Thursday, and neither could officials with the Federal Aviation Admission.

It’s believed the lights short-circuited underground amid the roughly three miles of electrical lines, according to the release. An outside electrician was called in for the job.

“This is an important safety issue that is a priority,” airport CEO Allan Penska said in the release. “It is unclear how long it will take to fix the problem, but we will work on it around the clock until it is fixed.”

The short-circuiting is most likely because of weathering over time or overloading from a transformer, airport spokeswoman Laura Aguiar said.

“It’s just electricity out there in the middle of an open field,” she told WUFT News. “It does get lightning strikes and other weathering.”

Regional airports like Gainesville’s usually connect customers to larger hubs, such as Jacksonville, Orlando and Tampa. When cancellations occur, Aguiar said, it’s up to the airlines to decide how customers get to their destination, whether that be by rerouting flights or even covering cab fare.

Jerome Williams, a Unimet Cab Company taxi driver who picks up people from the airport, said he has seen spikes in cab travel when cancellations and re-routings occur, but not necessarily because of Wednesday’s outage.

“Most people get vouchers, and we take them to Jacksonville or Orlando,” he said. “Most of the time, it’s to Jacksonville, but sometimes, it’s somewhere else.”

Lucas is a reporter who can be contacted by calling 352-392-6397 or emailing news@wuft.org.
@@WilsonStories
Previous Medical Marijuana Is Growing In Florida
Next Florida Senate May Pick Up Aspects of House ‘Uber’ Bill