Donald Eugene Shepherd, a candidate for City of Gainesville mayor, was arrested Wednesday morning on a charge of grand theft auto.

Shepherd also ran for mayor in 2013, placing sixth behind incumbent Ed Braddy and four other candidates. Braddy will face Shepherd again this year, along with former city com 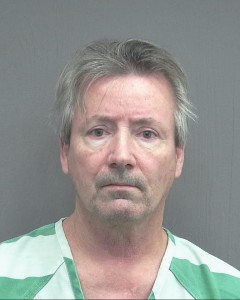 The charge stems from an August dispute Shepherd had with Christina Marie Avalos-Arteaga and her family, according to the arrest report. With regard to the charges, Shepherd has not hired a lawyer to defend his case. He said that he does not plan to hire a lawyer because he cannot afford one.

Shepherd denies any accusations claiming he stole the truck. He said he fears this arrest will negatively impact his mayoral campaign. He told WUFT News on Wednesday that he does not know the truck’s location.

“I want the residents and the voters to know that these are false accusations, and the truth will come out,” Shepherd said.

Avalos-Arteaga’s grandmother, Frances Crethers, died Aug. 12, 2015. She said Shepherd was Crether’s friend. They used to live in the same trailer park and knew each other for about 20 years.

Shepherd said he and Crethers discussed what would happen to her belongings after her death.

“I spoke to the grandmother,” he said. “She told me that if anything ever happens to me, I want you to have my truck.”

Shepherd was previously arrested Aug. 4, 1999 for a misdemeanor theft charge. He was released after his $5,000 bail was obtained through a bondsman. The case ultimately resulted in deferred prosecution.

Avalos-Arteaga was given ownership of a 1991 Ford F-150 truck that belonged to her deceased grandmother and was the family’s property, according to the arrest report. She planned to give the maroon truck to her brother who lives in California.

On Aug. 28, she went to retrieve the vehicle from her grandmother’s apartment, and it was gone. She went the following day to Shepherd’s residence, saw Shepherd with the vehicle, said she took a photo of him with it, and contacted GPD two days later for help retrieving it. The truck was not there when she and GPD arrived at his residence and Shepherd was not home, according to the arrest report.

She said she believed Shepherd was the last one with the vehicle. She said she doesn’t know what he did with it.

“I think he’s about as dumb as a box of rocks,” Avalos-Arteaga said on Wednesday. “He’s quite disturbing.”

Shepherd frequently comments during public comment periods at Gainesville City Commission. According to city meeting archives, he has spoken at commission meetings at least eight times since GPD’s Sept. 8, 2015, sworn complaint about the alleged theft.

The state attorney’s office — still gathering evidence during the past four months — didn’t issue an alert for his arrest until Thursday. He was booked into the Alachua County Jail shortly before 9 a.m. Wednesday and was released later in the day of his own recognizance.

Ariella is a reporter for WUFT News and can be contacted by calling 352-392-6397 or emailing news@wuft.org.
Previous Hawthorne Residents Want Plum Creek Development To Protect Area’s Wetlands
Next New Group Home To Cater To Those With Rare Overeating Disorder